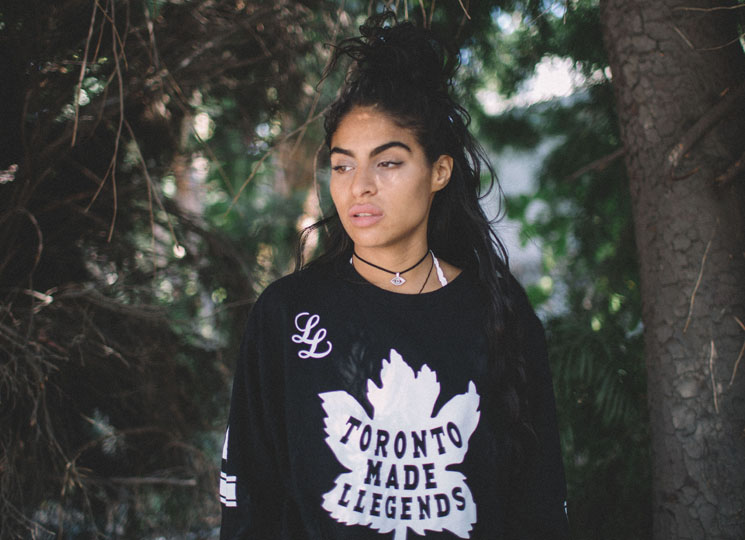 The Juno Awards will celebrate Canadian music in Vancouver this year, where a wealth deserving nominees, including Daniel Caesar, Charlotte Cardin, the Weeknd, Alvvays, Tanya Tagaq, Alessia Cara, Ruth B and more, will vie for the honours.

One, in particular, to keep an eye on is Toronto’s Jessie Reyez, whose four nominations are tied with Arcade Fire for the most. On the strength her 2017 EP, Kiddo, Reyez is nominated for Breakthrough Artist, R&B/Soul Recording the Year, Video the Year and the Fan Choice Award.

Reyez made a name for herself after participating in Toronto’s Remix Project music mentorship program in 2014. Since then, she has collaborated with Chicago rapper King Louie and EDM giant Calvin Harris, and can count the likes Chance the Rapper and Elton John as fans.

Before the Juno Awards are handed out on March 25, follow Reyez’s path to Canadian music’s biggest stage with our Timeline below.

Jessica “Jessie” Reyez is born in Toronto to Colombian parents. As she’ll tell Pigeons & Planes in 2016, “I was watching Celia Cruz and Pavarotti and my mom saw that I was obsessed.” She begins recording herself at age 8 using cassette decks, and plays guitar and dances into her high school years. The end a relationship in her teens leads Reyez into the world songwriting. “Me and him got together and fell in love, and when it went to shit when I was 17, it hit me hard as fuck,” she’ll tell Noisey in 2014. “That’s when I started to write about, real pain, I guess.”

After 18 years, Reyez’s family gets approved for American visas and plot a move to Miami. Having been performing around Toronto, Jessie is torn between living in Canada alone or moving south. Reyez makes the move and picks up a bartending job.

“The party atmosphere is a black hole down there,” she’ll tell Noisey in 2014. “People party all the time, and if you’re working in the industry, you’re sleeping all day and at the club all night. I did that for a year, I completely neglected my music. The only musical thing I did was playing the guitar at the beach.”

Reyez gets into Toronto’s Remix Project, an arts program that helps low-income youth study music, photography and creative business. She moves back to the city, where Daniel Daley (one half OVO duo dvsn), serves as a mentor. Her music is also heard by program guest King Louie, leading Reyez to an impromptu recording session with the Chicago MC. They release a single, “Living in the Sky,” prominently featuring Reyez’s guitar and vocals.

Reyez records and releases a second single with King Louie, titled “It Hurts (Selena).” Through King Louie, she meets another rising Chicago export, Chance the Rapper. Reyez appears in a video that Chance posts on Instagram, in which she covers his “Cocoa Butter Kisses” on guitar before the rapper jokingly cuts her f. The year also brings collaborations with Toronto rapper Junia-T and producer London Future.

Reyez releases her debut single “Figures” in August, and the track receives premiere treatment from Zane Lowe on Beats 1 radio. The song is penned by Reyez at a writing camp in Sweden, during which she’s going through a bad breakup back in Toronto.

As Reyez recalls on lyric website Genius, she is late to the recording session after an emotional evening arguing. “God has a sense humour, you know?” she adds. “Who would have thought the one song that would start getting more people excited was one the ones that came from one the darkest times my life?”

Reyez releases a video for “Figures” after its Beats 1 premiere, opening with a shot her smashing a guitar in slow motion. She also makes an appearance on Allan Rayman’s rereleased Hotel Allan LP in October.

Reyez delivers her seven-track Kiddo EP in April. The EP features “Gatekeeper,” on which Reyez recalls being propositioned and threatened by an unnamed industry producer. Her experience is addressed further in a 12-minute short film for the track.

The success Kiddo lands Reyez performances at the BET Awards and on The Tonight Show Starring Jimmy Fallon. She collaborates with Calvin Harris on his Funk Wav Bounces Vol. 1 LP, earning vocal and writing credits on “Faking It” and “Hard to Love.”

Reyez rounds out her year as a guest during Daniel Caesar’s five soldout dates at Toronto’s Danforth Music Hall.

Reyez earns four nominations at the 2018 Juno Awards. She appears as a featured artist on the soundtrack to Fifty Shades Freed, lending her vocals to Black Atlass’s “Sacrifice.” Her Kiddo closer “Great One” is featured in an NBA All-Star Game ad.