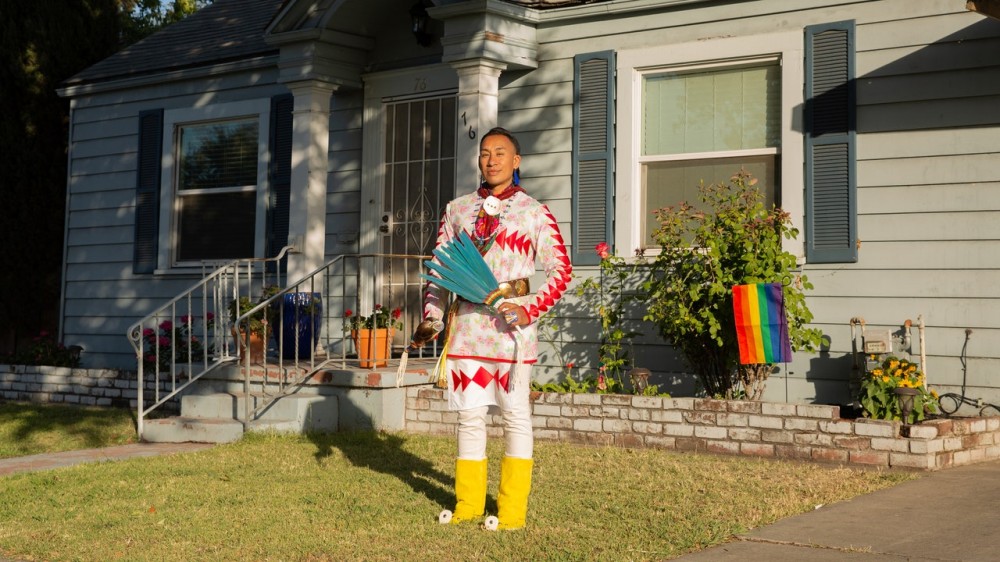 Every February, thousands of dancers and attendees flock to the Bay Area American Indian Two-Spirits (BAAITS) Powwow in San Francisco, California—the largest of its kind in North America. The event, which was first held in 2012, is a powerful display of cultural couture. Dancers of all styles who are Two-Spirit (an umbrella term for individuals who are both Indigenous and LGBTQ+, and fluidly move between the masculine and feminine) show up in their finest regalia. You will find them sporting handmade moccasins, striking ribbon shirts, or traditional beaded dresses that sometimes took several months to create. “I've never felt more at home than at a Two Spirit gathering or powwow,” says Faun Harjo, who is Muskogee Creek and Chickasaw. “Being Trans and queer in an Indigenous space, I haven’t always felt comfortable.”

The powwow is one of the many reasons why San Francisco is a major hub for Two-Spirits today. Historically, Two-Spirit people come from all sorts of tribes, and are described as those possessing both male and female spirits. “We were considered very sacred people,” says Eric Alvarado, a Two-Spirit powwow-goer who is Ndee and Michika. “We were teachers, medicine people, warriors, and artisans.” Different tribes had different words for being Two-Spirit—the Lakota used “Winkte,” the Zapotec “Muxe”—but today, Two-Spirit has become a term that all queer Native people can identify with. For some, it refers to a third gender; for others, it’s more of a catch-all title. “The Two-Spirit concept has allowed the creation of a community across nations, of LGBTQ+-identifying folks,” says Angel “Tlahuizpapalotl” Fabian, who is Ben Zaa/Zapotec.

Two-Spirits gather in San Francisco every February for the powwow, but they also have a presence in the city year-round. Many Indigenous people first landed in San Francisco due to the 1956 Indian Relocation Act, which encouraged Indigenous people to leave their traditional lands and assimilate into urban areas. In 1975, the Gay American Indians organization was founded as a place for Two-Spirits to gather and socialize, and a queer Indigenous community has grown as a result.

This Pride Month, Two-Spirits partook in events around the city, including the big parade. In the ballroom voguing scene, Tlahuizpapalotl has been known to bring Indigenous flair. “I’ve worn embroidered shirts or gowns,” says Tlahuizpapalotl. “We also use a lot of feathers in Aztec dancing, so I’ll complement my looks with them.” Last week, Indigenous Two-Spirit drag queen Landa Lakes, who is Chickasaw, performed at a Friendship House Pride event. “It was a memorial-slash-celebration for those who have passed away during COVID-19,” Lakes says.

To celebrate the enduring presence of Two-Spirit people, Vogue photographed seven Two-Spirit individuals this Pride Month, all of whom brought their striking regalia to San Francisco. By wearing their traditional attire, not only are they carrying on their tribes’ unique craftsmanship and designs forward—they’re also celebrating their unique identities through style, and doing so in a major metropolitan city where their presence is felt, but not always heard or recognized. Below, they reflect on the deeper meaning and power behind their pieces.

Based in: Oakland, California
“There’s a story behind my female-presenting attire, which is a huipil (dress). My people’s origin story is that we are direct descendants from the clouds and the Creator. We’re mountain people, and there was a particular tree that we paid homage to. When the colonizers came, they tried to destroy that tree, and out of it came one of our sacred snakes—the black Boa snake. That is the piece that I have on my head: it’s representative of a black Boa. Several coral snakes also came out of that tree, and that’s represented in the strings on the front of my dress. The red shirt [found in my male-presenting attire] is hand-woven and dyed in the same way as my huipil, and worn during festivities. I wear a lot of amulet necklaces for protection. The necklace is beaded and represents the monarch butterfly (papalotl) that yearly migrates thousands of miles in the American continent, like many of the original inhabitants of this continent did.”

Based in: Stockton, California
“I’m wearing traditional Western Apache male regalia. The beadwork is done by Joseph J Newman. It’s vibrant, but the red also ties in with the Missing and Murdered Indigenous Women movement. I’m also wearing a medicine bag, a hawk fan, and a gourd saddle, given to me by my grandpa, to symbolize the gourd dance. It’s a men’s dance found in the Southern tribes, but now it’s a more intertribal dance. I’ve been a gourd dancer since I was a teenager. It’s mostly a warrior dance; the men dance in front of the women. My moccasins were given to me by my grandma, and they are one of my most prized possessions. Usually, I try to incorporate both genders in my regalia. My regalia here is men’s regalia, but I’ve incorporated more flashy jewelry and beadwork, to try to embrace my feminine side. I’ve always felt that I wasn’t just one gender. I knew there was a feminine side to me, but I was always scared to show that side of me. Being two-spirited means I walk in beauty with both genders.”

Based in: San Francisco, California
“Everyone has different ways that they’ve expressed being Two-Spirit throughout their tribes. My auntie, Landa [Lakes], has been really helpful in connecting me with my Two-Spiritedness. She’s gotten me to a place where I feel more familiar with our regalia and language. This regalia is for stomp-dancing: The top is a ribbon shirt, and the bottom is a breechcloth, along with a wool belt. I have tattoos on my wrist and one of them is a skull, so I beaded that onto the bag. Our ancestors were mound builders, so it’s a mounds builder design. I’m also holding turkey feathers, gifted to me by an auntie. My necklace, which looks like a little shield, is a georgette. I’m also wearing a porcupine roach.”

Based in: San Francisco, California
“I made all of these pieces except for the breechclout, which is made by Aodhàn Crawford, a Two-Spirit artist. I’m wearing a real hide leather vest that I painted a medicine wheel on. In the medicine wheel teachings, there are four different colors, and depending on your point-of-view, they represent different properties. It can represent the four directions, or [the four elements] earth, wind, fire, and water. I also have on a lopping necklace that covers my chest. It’s made of hide, sinew, and white, red and black beads. My regalia always combines red and black colors. The leggings and moccasins I also made from hide, and I made my breastplate as well.”

Based in: San Francisco, California
“I’m wearing a ribbon shirt, which is worn by many different tribes today. The colors of the ribbons represent my family colors. I’m wearing a copper Georgette, which is a piece of jewelry that covers the neck. It’s a decorative piece, but it used to be worn during times of war to protect the neck. I'm also wearing a bracelet, which I got from my tribe as a token of appreciation for being a community leader. I’m wearing traditional pucker-toe moccasins—normally we would decorate them—and a woven sash, presented to me by an elder. On my arm, I’m also wearing a shawl that represents the duality of being Two-Spirit. In the past, I’ve also worn traditional tear dresses, which Cherokee women would wear.”

Based in: San Francisco, California
“I’m wearing a traditional tear dress, a turtle shell, and shakers, which are made from cans. Most of my tear dresses are green, because it’s my family color. Shakers goes along with stomp dancing, and I made my shakers feel more Two-Spirit, because I chose to tie them with pink ribbons. When you’re dancing around the fire, your shakers get covered in soot, so they are usually more for function—but I wanted them to look pretty. The sash I’m wearing around my waist is also part of stomp dancing. I identify heavily with my feminine side, but I can also be very masculine. I am a veteran of the Navy—I was in the Navy for three years during Desert Storm—and the baldric bag across the chest signifies my veteran status. The shawl was also given to me by one of my trans aunties, Sally, before she passed. Everything I have, for the most part, has been given to me by other Two-Spirit people. When you say you’re Two-Spirit, people know that you’re Indigenous without having to tell them—and I like that, because it’s so easy for us as Native people to disappear in big cities like this.”

Based in: Oakland, California
“Identifying as Two Spirit has always meant I have embraced my culture. It means I see myself more than just a gay, lesbian, or queer person—it means I am Native. It’s important to wear regalia that is associated with me being Apache. My regalia was made by a Two-Spirit friend’s mother, Carol Sneezy, who is San Carlos Apache. My beaded T necklace was given to me by an auntie in the ’90s, long before I had regalia. Approximately 10 years ago, when my mother passed away, I went to visit a cousin in Arizona, who brought me my first regalia; The red satin reminded him of my mother and the colors were beautiful, but I always wanted regalia that reflected me being Two-Spirit, which I feel my current turquoise regalia does. The drum was a birthday gift from my wife, purchased from the Stanford powwow.”