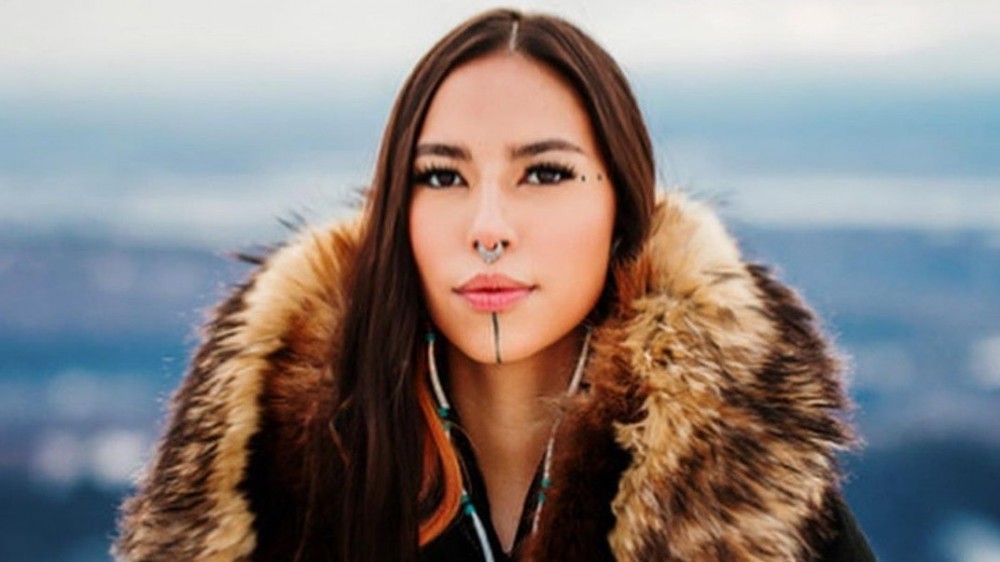 For Vogue Mexico’s May issue, the publication wanted a cover star who represents “the face of a new generation of models,” and Indigenous model Quannah Chasinghorse certainly embodies this in more ways than one. Photographed by Inez & Vinoodh for the cover (in an ethereal Valentino dress, no less), the 18-year-old is a refreshing addition to the fashion scene: she proudly displays her traditional tattoos, rocks authentic Indigenous style, and has an array of impressive activism work under her belt too. In the process, she’s also breaking barriers, providing much-needed representation for Indigenous people in an industry that has long overlooked and excluded Indigenous talent.

Currently based in Fairbanks, Alaska, Chasinghorse—who is Hän Gwich’in and Oglala Lakota—is still relatively new to modeling. She has lived in Alaska since she was seven, and only signed with IMG back in December. One of her first big modeling jobs was being cast in a Calvin Klein campaign in October last year, and since then, she has been cast in shoots for V and Thunder Voice Hat Co., an Indigenous-owned hat company. She says her new Vogue Mexico cover is completely surreal. “I’ve always wanted to model. But growing up, I never saw Indigenous representation in fashion or beauty,” Chasinghorse says. “I never grew up feeling confident because of the negative stereotypes of Native Americans. But that’s changing. Today, younger generations are going to be able to witness Indigenous excellence on the cover of magazines—and hopefully everywhere.”

Prior to her foray into modeling, Chasinghorse was known predominantly for her activism work around Indigenous issues and climate change, and she has gained a large following on social media because of it (she currently has 40,000 followers on Instagram alone). In the past, she has fought tirelessly to conserve her state’s Arctic National Wildlife Refuge—a sweeping, 20-million acre ecosystem that continues to face endangerment due to global warming—and she continues to use her social media to advocate for key issues such as this. “I’m extremely passionate about the [activism work that I do,” says Chasinghorse. “I get Native youth reaching out to me and telling me that I inspire them to use their voice, and to look more into their identity as an Indigenous person, too.”

Chasinghorse is also bringing her knowledge and wisdom to her modeling work. With each job she takes, she hopes to educate people about her culture and to share her personal experiences. “People forget that we are people that have gone through so much,” says Chasinghorse. “They forget the history, let alone even know the history—it’s been invisibilized for years. But we're starting to see more Indigenous people being uplifted and included, and it's amazing to be a part of it.” One way she’s bringing her culture to the modeling space is through her love of Indigenous fashion. For a recent V shoot, for instance, she wore some of her own Indigenous-made jewelry pieces. “For many years, our culture and our sacred symbols have been [appropriated],” says Chasinghorse, who adds that she loves bringing authentic pieces that she and her family have made to the forefront of the fashion world. “My grandma and my aunties are the ones that taught me how to bead.”

Chasinghorse also embraces her individuality in modeling through her traditional Hän Gwich’in tattoos, called Yidįįłtoo, which are a striking part of her signature look. “They makes me feel more confident, because [by having them,] I’m carrying a part of my ancestors that was almost completely lost,” says Chasinghorse. She got her first tattoo, a singular line running down her chin, at age 14. It was done by her mother in a hand-poke style. “My mom has been educating me about our sacred tattoos since a young age,” says Chasinghorse. “The meaning of my first tattoo is all about becoming a woman. [In my culture,] when someone steps into her womanhood, she is now able to give birth, get married, and start taking on more responsibilities. With that comes a ceremony; we always hold a ceremony when we do traditional tattoos. It was such a powerful experience. When I got the tattoo, I really felt myself connecting to a deeper part of myself.”

She got her second traditional tattoo—three dots at the corner of each eye—last year. It was also done by her mother, and inspired by a dream she had about her. “I’ve been battling with depression and anxiety since elementary school, and I realized I needed to start focusing on my healing,” says Chasinghorse. “I had a dream that my mom was tattooing around my eyes, and she said, ‘You need to start your healing journey.’” She decided to get the tattoos done as an homage to the resiliency and constant healing work that Indigenous people have to go through. “I remember when I was done, I felt like a different person,” says Chasinghorse. She wants to continue adding to it, too. “I’m not done with it; I want to connect the three dots to form a line,” she says.

Like all of her activism work and impactful fashion choices, she sees her tattoos as an opportunity to educate others about a lesser-known aspect of her culture. This is especially powerful in a space like modeling, where models were once expected to have a uniform look. “The world is slowly recognizing that Indigenous people are not only beautiful and strong, but we hold values that are solutions to a lot of today’s problems, such as the climate crisis,” she says. Though she loves modeling and fashion in general, she wants to use it for something bigger. “I am a storyteller,” Chasinghorse says. “I wish I was able to see [someone like myself] as a kid, because I would have felt so much more confident in myself.”