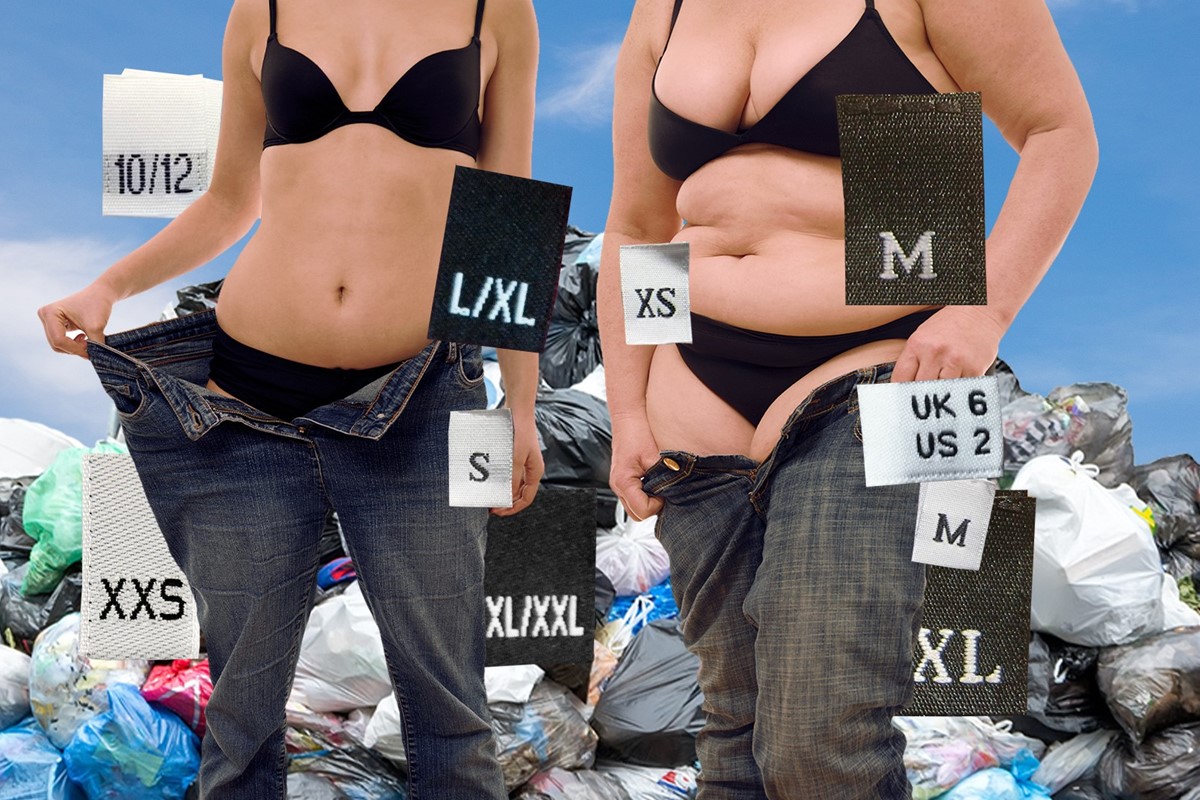 With most returned clothing going straight to landfill, discrepancies between sizes also negatively challenge our sense of self

Turns out plenty of other people want to scream about it, too. The issue has sparked endless TikToks, Tweets and Instagram posts, as people call out brands for their inconsistent sizing. “I own jeans that are a size eight, and I own jeans that are a size 14,” says Mille Ditlev Schmidt. “I ordered a pair of jeans in a size 14 to make sure they fit. They did, so I ordered two more in different colours, but I couldn’t even get them over my bum. That was such a weird experience.”

Standardised sizing emerged as a way to cut costs as the catalogue industry blossomed, but it was plagued with problems from the beginning as the data gathered didn’t represent the average American woman. Even though technology has become more sophisticated than the tape measure since then, the same problem still exists: you can’t create a standard size when there’s no such thing as a standard body.

In the system’s infancy there was a single, accepted size range but now each brand works to its own rules, making navigating buying clothes that actually fit infinitely harder. “Each brand has its own sizes based on the specific marketing stories they want to tell the customers,” says Audrey-Laure Bergenthal, CEO of Euveka, which creates scalable robot mannequins. “Marks and Spencer have a brief of selling to a ‘woman of a certain age’, while luxury brands such as Burberry or McQueen are selling to a woman who’s 30 maximum, who lives in London, who has a fancy life. They have their own story they want to tell, and this story has an impact on the kind of body they want to design clothes for.”

In this context, differences in sizing do make some sort of warped sense, but like Taylor-Gill, most have experienced wild inconsistencies even within a single brand. This can be attributed to a range of factors, such as not accounting for the qualities or drape of different fabrics, as well as high-speed production and the resulting lack of quality control.

As the owner of a small brand, Rosette Ale is able to take more time over her fits and implement customer feedback for her brand Revival London. “Because I don’t have thousands and thousands of orders, I can see who’s ordering what and I have that understanding of how things can be made to fit my customers better,” she says. Fast fashion brands are almost always the culprits of call-out posts about sizing, but as a slow and sustainable brand, Revival can adjust to its customer, even offering free alterations for life.

Ale’s customers can be confident their purchases will fit, but a third of shoppers expect they’ll have to return some items when ordering, with variations in sizing the number one reason for online shoppers making returns. Between 2014 and 2019, e-commerce returns rates grew by 95 per cent. In the UK they’re expected to grow by another 27.3 per cent by 2023, although this figure doesn’t take into account the boom in online sales due to the pandemic.

The issue is, when clothes are returned, they’re not always just packed back up and put back into stock. The costs involved just aren’t worth it for many brands, so instead, returns are sent to landfill as they cut their losses. In the US, 5 billion pounds of returned goods end up in landfill each year, creating 15 million tonnes of carbon emissions.

“I used to think, oh if I send stuff back it’s fine, it just gets reused,” says model and writer Essie Dennis. “But then I read that they get rid of them, and I really don’t like being wasteful.”

While careening between a size eight and a size 12 is frustrating, shopping plus-size, as Dennis does, is even trickier. “The fashion industry only prototypes the fit of the garment on one model, who is generally a size small and who has a life that nobody has,” explains Bergenthal. “They produce garments on an idealistic basis which represents maybe one per cent of the population. Other sizes aren’t controlled, they’re scaled mathematically and are full of fitting errors. They need to recreate the pattern entirely and they don’t do that.” Because of this lack of investment in creating the smallest and largest sizes, billions of garments at either end of the scale go unsold.

“I used to think, oh if I send stuff back it’s fine, it just gets reused. But then I read that they get rid of them, and I really don’t like being wasteful” – Essie Dennis

Dennis agrees with Bergenthal. “Brands don’t necessarily think about how clothes are going to fit plus size people and that you’re going to have fat in different places and you’re going to want things to be more elasticated,” she says. “You never really know exactly what you’re gonna get.”

Dennis speaks frequently about body acceptance but for many, erratic clothes sizing can trigger dysmorphia and low self-esteem. “I lost weight during the pandemic, enough to go down around one size,” says Claire Shaw, who’s a UK 16. “I got excited by the fact I might finally be able to buy (the highstreet’s) largest sizes, and all that excitement turned to misery when I still couldn’t fit. I’d spend two or three days with my head spiralling and it would take me a few days to re-ground myself and remember that my body is healthy and soft and lovely.”

As well as being damaging to self-esteem, poorly graded plus size clothes add to the likelihood of returns and waste. “If clothing sizes are inconsistent, that can negatively challenge our sense of self,” says fashion psychologist Dion Terrelonge. “If we have a script that says I am a size 12, for instance, that is a marker of our typical selves. Then if a garment doesn’t fit, we might be less likely to buy a size up because doing so misaligns with the script that we have of ourselves.”

“The numbers are arbitrary and socially constructed but it’s about the way the sizes are interpreted, either positively or negatively in society,” she continues. Because we may attribute worth to certain numbers and deem others unattractive through society’s gaze, Terrelonge suggests that many will buy the size they know themselves to be rather than the size that fits, waiting until they can fit into it, adding to the £10billion worth of unworn clothes already sitting in UK wardrobes.

Dennis has turned to made-to-measure clothes to ensure a perfect fit, but there are solutions out there designed to tackle the sorry state of sizing. Kai Collective takes a simple approach, showing photos of clothes on different size models so shoppers can understand how the clothes would fit their body type. Other approaches are more tech-focused. ASOS trialled ‘See My Fit’, an AR tool that simulated what certain dresses would look like on different sizes, while known waste-creators like Amazon and H&M are trialling virtual fitting rooms. Euveka, which helps brands create their sizes and consumers visualise fits, has reduced returns for its clients by 40 per cent. And where smaller and larger sizes are concerned, by 70 per cent.

Technology can’t fix the problematic associations between self-worth and size labels, but it can go a long way in reducing the excessive waste that haphazard sizing creates. “Brands cannot turn a blind eye to this problem anymore,” says Bergenthal.

Why is clothes shopping like rolling dice with near-infinite sides?

Zero uniformity in sizing which means so much more second-guessing and returning than enjoying the item.

Jeans and bras are a gauntlet all their own.