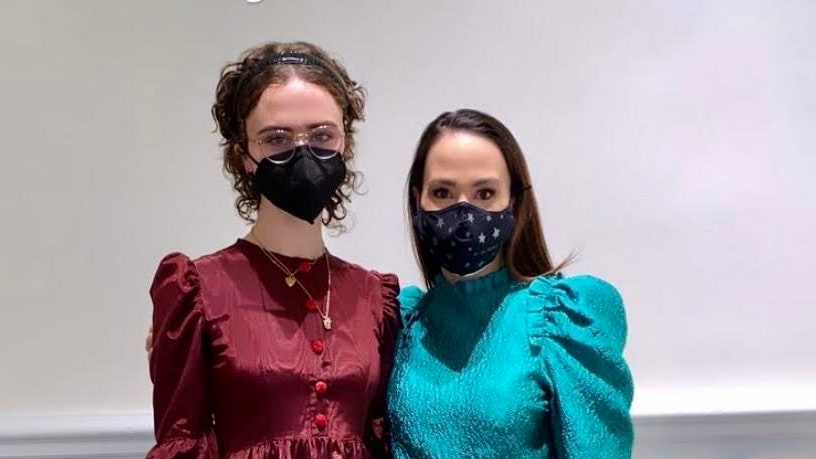 Inauguration Day always ushers in change, but perhaps never more so than this year, when President Joe Biden and Vice President Kamala Harris will finally wrest control of the White House away from the Trump administration. Biden and Harris’s families were, of course, on hand at the swearing-in ceremony on January 20, and preparations for the day began well in advance; for Ella Emhoff, Harris’s 21-year-old stepdaughter, that meant collaborating with designer Batsheva Hay to come up with a truly one-of-a-kind fit for the occasion.

This week, Vogue spoke to Emhoff—a designer in her own right who is currently a senior at Parsons—and Hay about the process of coming up with an Inauguration Day dress that worked with Emhoff’s Miu Miu coat, their feelings on D.C. style, and a potential future collaboration. Catch up on the conversation below:

Batsheva, how did you feel when you found out your clothes were on Ella’s “mental mood board” for Inauguration Day?

Batsheva Hay: I was so amazed. I didn’t even know Ella’s Instagram or how to contact her, but my friend was like, “Kamala’s stepdaughter is so cool, you have to check out her work.” I never thought she’d know who I was, but my friend was like, “You should definitely shoot her.” Then, all of a sudden, this came up, and we followed each other, and I went down the rabbit hole of seeing all of Ella’s knitwear. I was literally trying to buy stuff, and it was all sold out! I became obsessed, and was like, what do I have for her? How can we make this happen?

How did you go about choosing a specific look for Ella?

BH: Ella liked a certain style that she’d found online on Matches, and I looked through some of the new things I was working on—samples and stuff—and we came up with a great version of it in a different fabric.

Ella Emhoff: The black would have been fine, but the color we chose happened to work perfectly with the coat I’m wearing. It was just fate!

Ella, what vibe were you going for with your Inauguration Day outfit? How did you want to feel in it?

EE: My mood board was very “little girl,” in a sense, a lot of scalloped collars and big silhouette shoulders and small buttons. I was going for something girlier, to embrace my feminine side—especially after that suit that I felt so great in—because, like, how many times do you prepare yourself to attend an inauguration? This momentous of an event deserves a momentous outfit.

Batsheva, what do you think you’d wear to an inauguration?

BH: Well, get ready for the next one, when Kamala’s president! (All laugh.) I make things according to my style, which is very specific and not for everyone, so it’s just amazing to be a part of something like this. I used to work at a white-shoe law firm in D.C. that was very into formality, so I love the idea of sneaking individual style into this super-momentous occasion.

EE: I didn’t realize how formal—or how cold—it would be!

BH: That’s what I love about Ella. She’s someone I could 100% relate to. Ella has such a point of view and a style that you don’t always think about in D.C., because, like…D.C. has the worst style. (All laugh.) I lived in this world, so I know; in D.C., you’re mostly rocking Ann Taylor Loft. Women in politics often have these feelings of having to suppress their style or their individuality to fit into these boxy suits.… I don’t mean that you have to rebel and stick up your middle finger to the notion of dressing in a way that’s dignified, but for me, it was really fun to make a dress that fit the bill but was still unique.

Ella, how did you choose Batsheva to work with for this huge day?

EE: Something that’s really important for me, especially with people I wear, is: I want to be able to see them as an artist and as a designer, and work with people who I really respect. I love New York for its fashion community, especially the parts that are created through Instagram, so working with a designer from that scene who was able to create something formal was perfect.

Ella, how does it feel to be helping to define the Biden-Harris administration’s style?

EE: It’s something that I think a lot of people in the past also haven’t put as much emphasis on, especially because you didn’t really think that certain people [in past administrations] were going to be throwing outfits out there. You didn’t expect much. Amongst Dr. Biden and Kamala and Meena [Harris] and me, though, I guess there is kind of some anticipation about what we’re going to put out there in terms of fashion. Maybe that’s because we’re all women, or maybe it’s because we’ve had big outfits in the past, but I think people are definitely going to be paying more attention.

One last question I promised the Vogue team I would ask: Can we expect a knitwear collab from the two of you?