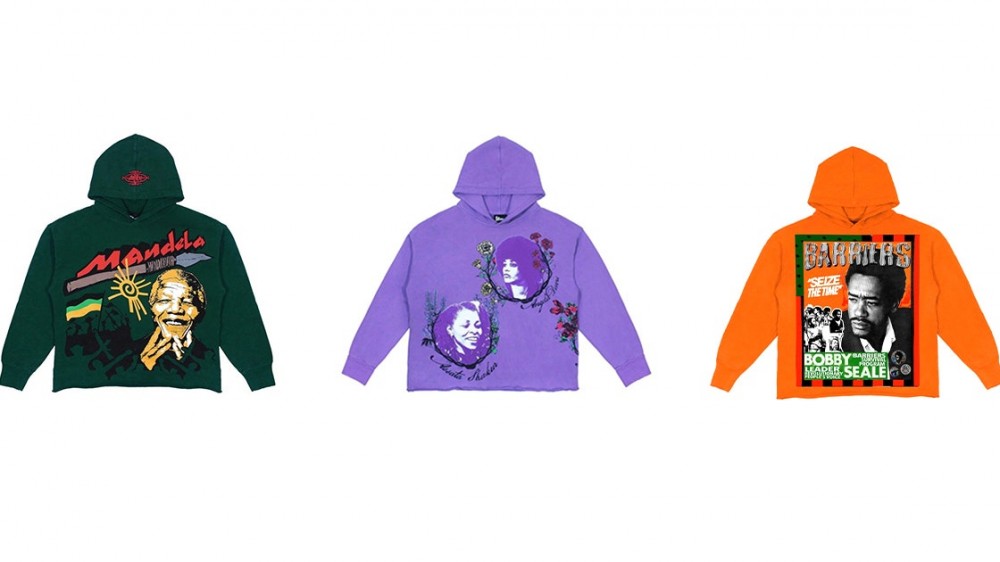 For Barriers designer Steven Barter, clothes are more than just clothes. They are walking billboards, and teaching tools. “Clothing is really powerful, because we always need it,” he tells Vogue. “Everybody always wants to wear what’s new and fashionable, but we wanted to make it purposeful.” Sure, his streetwear line of hoodies, tees, and sweats looks cool on first glance, but they are always rooted in a bigger purpose, which is to share untold Black histories in a way that today’s youth can easily digest; He does so by taking specific historical topics or figures that they may be unfamiliar with, then amplifying them via bold, eye-catching collages and portraits on the clothing. “There’s a lot of kids out here confusing prominent figures like Martin Luther King and Malcolm X,” Barter says. “They don’t know the difference, so my job is to teach them. And I found a way to make it cool.”

Barter—who is from Queens, New York, but based in L.A.—launched his brand in 2015. At the time, he says sharing Black history through fashion was still a new concept. “Nobody was really showing that they cared about our people and our history through clothing,” he says. “I felt like it was time for people to know the truth about our history.” Now, he has gained a cult following for his meaningful pieces, which are sold in random, spontaneous drops and instantly sell out.

His most popular items continue to be his hoodies. Through them, he wants to capture trailblazers who have made a difference in the Black community, and preserve their memory through streetwear. “It’s like a timeline: I’m trying to leave things behind for the future,” he says. Recently, he designed an orange Bobby Seale hoodie with the quote “Seize The Time” on it. “He’s one of the founders of the Black Panther Party,” Barter says. “The Panthers made a huge impact in the world, and they did it with no money. Most kids need to learn about this story, because I feel like you don't need a million dollars to start your dream—you just need the right people around you as well as a vision.” He also released a lavender hoodie as an ode to powerful Black women, featuring images of Angela Davis, Assata Shakur, and more. “Black women are powerful beyond measure,” he says. “[They] aren’t given the support and protection they deserve in this world.”

In addition to his clothing releases, Barter also regularly puts on art installations that fall in line with the brand’s focus on storytelling. “With my installations and our shows, it’s just giving [our message] a boost,” he says. He recently put on an art show in New York in May in a faux bank vault. “With the bank vault installation in New York, that was a symbol to protect Black art, and then inside I had a cage and put all the Black inventions in there,” he says. He also plans to put on another exhibit sometime this summer.

Going forward, Barter says he will continue diving into the history books to find both design and art inspiration. “I never run out of ideas. There’s so much to learn from,” he says. “Most of the new stuff I'm making, I’m just learning from books that I read in my crib. How people look up YouTube videos, I look up documentaries.” He will also be expanding his purview of what histories he tells through style. “I’m about to switch the whole brand up now, because I don’t want to strictly share Black history,” he says. “I want to share the untold histories from all across the world.”