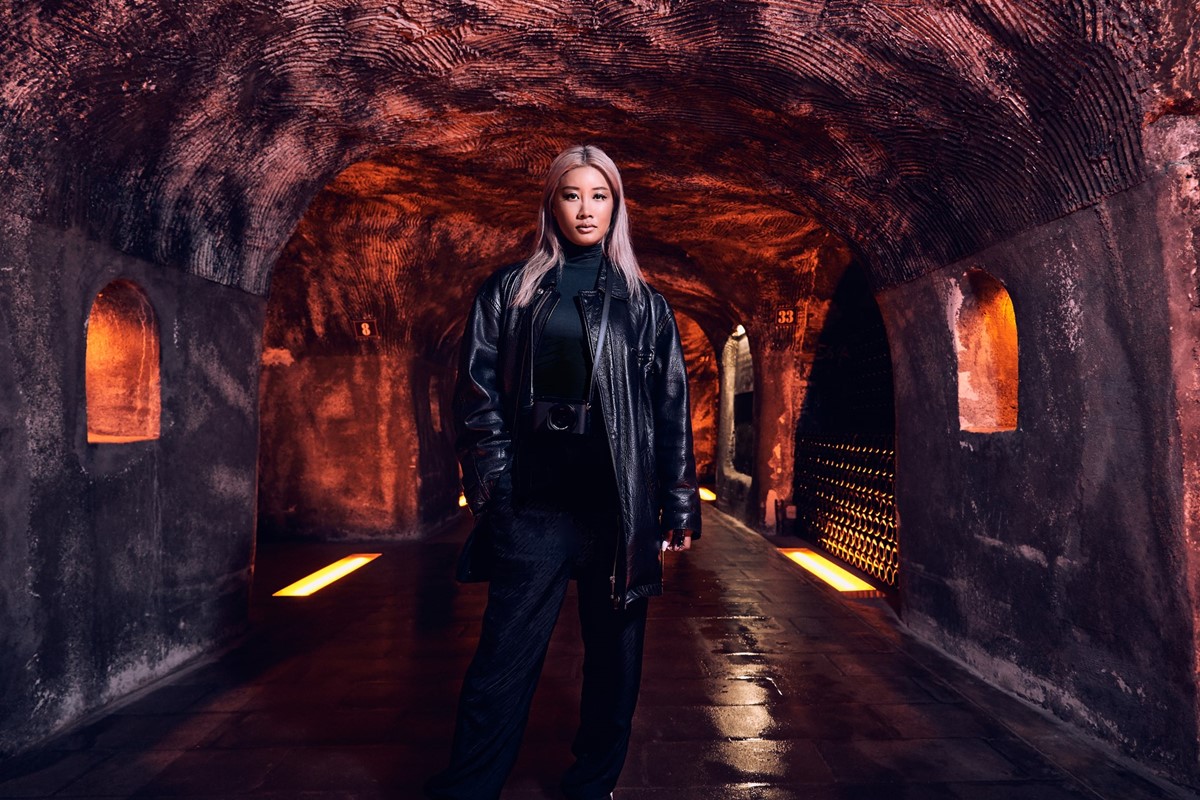 As both a strong, singular creative mind and deft collaborator, AMBUSH’s creative director Yoon is at the helm of cult brand latest collaboration – a partnership with Moët & Chandon. The union sees the famed designer create a new, soon to be iconic limited edition champagne bottle – a sleek, chic design that evokes Yoon’s window into the future and the 278-year-old, sophisticated heritage brand. The Moët & Chandon style and spirit – both flamboyant and effortlessly cool, elegant and rebellious – has bloomed and fizzed across pop culture and lifestyle for years, from Freddie Mercury’s Moët-referencing in “Killer Queen” to Virgil Abloh’s Moët Nectar Impérial Rosé design. Now, we’ve got another bottle-popping moment.

Yoon, of course, knows how to make a pop culture moment. The AMBUSH founder, designer, and Dior Homme director of jewellery has spent her career honing a monolithic voice in fashion, with bold designs that traverse the high glamour and hip hop of LA and pop art, avant garde scene by way of New York, and Tokyo’s textured underground subcultures. AMBUSH, the renowned brand she founded with her partner Verbal, has had its most major collaborations range from Louis Vuitton, to Nike, Off White, BAPE, and Sacai. Yoon herself is a staple shot in fashion week street photography, storming Dior’s runway, gracing the BoF 500 list, and appearing in an A$AP Rocky music video.

“At AMBUSH, we are not afraid to look outside our comfort zone. We have always embraced new visions. But we only accept collaborations where we can learn something new,” Yoon shares with Dazed. “Although champagne is a completely new world for me, I was curious to learn about Moët & Chandon and its champagne-making heritage. What made this collaboration so meaningful was that it was based on a mutual respect and the desire to tell a compelling story. That is what makes any collaboration genuine.”

With genuine commitments to sustainability and climate action, Moët & Chandon will also donate a portion of profits from the sale of the AMBUSH limited-edition bottles to preserve the Canandé Reserve in the Ecuadorian Chocó, one of the world’s most threatened tropical forests and a place as biodiverse as the Amazon rainforest, but under significantly more threat. Only 2 per cent of this forest remains today, still inhabited by 10 per cent of animal species not found anywhere else on the planet.

The AMBUSH redesign of the Moët Impérial bottle – the bottle’s first redesign since its release in 1869 – stays true to the brand’s iconic codes, keeping its familiar tie, but daringly reimagines other elements. “I played with elements of colour and the label,” says Yoon. “This Moët & Chandon bottle has always been identifiable by its golden neck, so changing that colour to black was quite drastic. I then contrasted it with a new all-white embossed label, to produce an eye-catching design that suggests a blank slate, like a window onto a future filled with possibilities for those who dare step forward. It was a strong and impactful move, because it allowed me to achieve the clean modernity of stark contrasts, which is at the heart of my designs for AMBUSH. It makes for a striking design that is sharp, uncluttered, and very contemporary.”

Here, the fashion and jewellery luminary talks more about how to make a brand pop, her vital industry insight for emerging creatives, preserving and reimagining an iconic brand like Moët & Chandon, and leading those culture-defining designs. Grab a glass.

AMBUSH, founded in 2003 by Yoon and Verbal, made a rapid ascent with exciting, streetwear influenced designs that built on pop culture, future-facing aesthetics, and surrealist art, which birthed statement pieces like the padlock choker and the zip tie necklace, soon coming to capture celebrity adoration. “The genesis of our brand was, at our beginning, when Kanye wore our POW chain!” she says. “That was a big pop culture moment.” From there, they grew a cult following and found fans from Kanye to Rihanna, a spot on the LVMH prize finalists list, and worldwide runway presentations. “POW chains were made for fun to give out to friends, so it wasn’t even a brand thing yet. The turning point arrived definitely when retailers started ordering them and that’s when we decided to really go for it, as a proper thing, and here we are now!” AMBUSH were one of the first brands to run with ‘remix culture’, recruiting celebrities and influencers from across streetwear and hip hop – then, a radical venture.

PERFECTING THE ART OF COLLABORATION

AMBUSH has spent over a decade pushing the boundaries of creative collaboration, from the 90s inspired basketball apparel capsule collection with Nike, which saw Yoon become the first female designer to partner with Nike and the NBA and a new creative take on the Nike Dunk, to the fun and furry Converse collab, and a Beats headphones partnership.

“We had so many collaborations, and they are all unique in their own way because not one of them is the same,” says Yoon. “Out of all that we have done, I really enjoyed working with Nike and Dior Men with Kim Jones. Recently, the Beats headphone collab was really fun, and making the alien snake bags with Bulgari was fun too. Our Converses have been  a staple in my wardrobe.”

Speaking of the Moët & Chandon collab, Yoon continues: “I could see first-hand how important it is for the House to value its teams and to care for its people. That care inspires positive outcomes, and is ultimately reflected in what the House offers its clients. That translates into the care and attention that the people at the House bring to the smallest detail of their role in making champagne.” She adds that both Ambush and Moët stress the importance of investing time and resources in developing local production. “Everything is done by the House on its own land and in its own facilities in Epernay. Those are crucial points for a modern, responsible business that knows exactly how everything is done in its name.

“On a much smaller scale, we try to do the same at AMBUSH, by ensuring that our teams feel valued and appreciated, by ensuring the means of production to make a top-quality product, and by using local know-how.”

WHAT TO KNOW WHEN YOU’RE STARTING OUT

Before the Korean-American fashion and jewellery designer took the industry by storm, she spent a childhood oscillating between Korea, California, and Hawaii (her father was in the US Army) before cementing herself early in Seattle. When she moved to Boston, she studied Graphic Design at Boston University, crafting her jewellery on down days and gifting her creations to friends. After meeting her partner, rapper and designer Verbal, they married and kickstarted their brand together. “Think long term,” Yoon advises astutely, reflecting on over a decade of design work and brand growth, and invest in capital where you can. “Be friends with everyone and learn from them,” she adds – unsurprising, given her friendship and creative circles include the likes of Ye, fellow former Fendi intern Virgil Abloh, and Dior colleague Kim Jones. Most important of all: “always study, always stay curious.”

BEING FEARLESS AND BREAKING THE RULES

“I am a rule breaker by nature,” asserts Yoon. “But I am always true to myself, whether it is at AMBUSH, or in collaboration with another brand. I always strive to be genuine. When Moët & Chandon offered me this incredible global platform, I knew that it was my responsibility to express my philosophy in a genuine way. It is also a ‘rule-breaking’ move for such a prestigious French Maison to associate its name with a modern creative. It was daring and pioneering.”

The Moët Impérial bottle hasn’t been redesigned by an artist since its first release in 1869, so this is a significant milestone for both brands. “I was thrilled to be given carte blanche to redesign the bottle,” she shares. “It was a great challenge, given its recognisable and iconic codes, but I also saw it as a great opportunity to bring my own aesthetics to this iconic champagne.” Whether it’s recruiting burgeoning hip hop stars into your fold, alien snake bags a la Bulgari, or popping your radically designed champagne bottle, rules are there to be exploded.

RESPECTING AND GROWING YOUR WORK ETHIC

“In my own work, I have learned everything from experience. AMBUSH is about creative design combined with a great work ethic,” says Yoon. “A lot of time goes into making something exceptional. Creating true luxury takes time and labour. Today, consumers want to know how things are made and where products come from. Moët & Chandon is in tune with that global community and strives to do the right thing for people and the environment.”

The labour is palpable in the brand’s support of the Canandé Reserve and the World Land Trust, an international conservation charity that protects the world’s most biologically significant and threatened habitats. Yoon shares that she was inspired to select the World Land Trust to receive the support of the House, so that together they could help preserve other terroirs around the world. The support from the Moët & Chandon x AMBUSH collaboration will have a direct impact on stopping the deforestation of the Chocó, not just for the sake of its fragile species, but also to combat one of the causes of climate change.

Yoon adds: “It is important to respect one’s own craft, to preserve nature, to have esteem for people and traditions, all of which are necessary especially if you want to bring to the world, something that is unique and exceptional.”

For more information and to purchase your bottle from March 1, head to Moët & Chandon or Selfridges