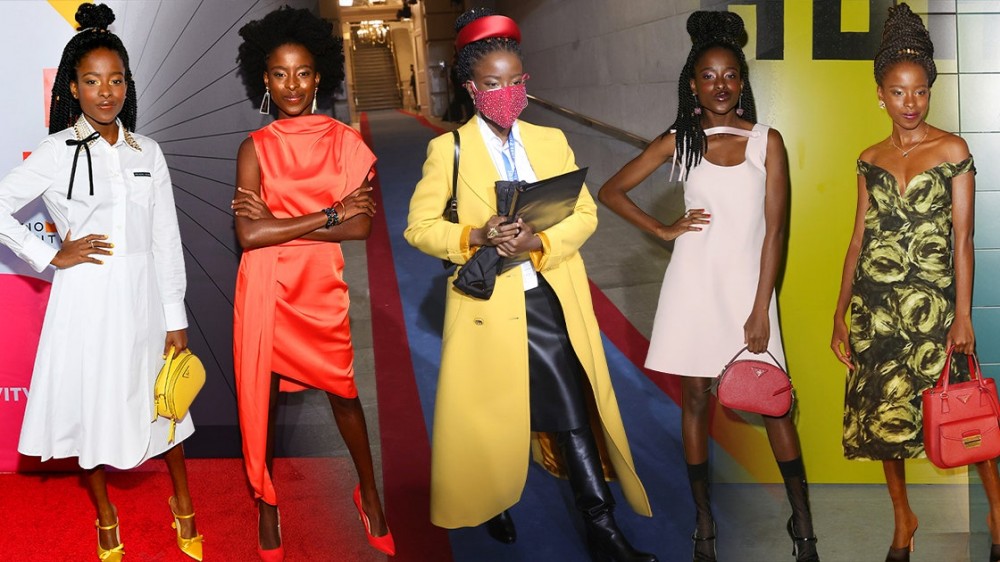 When Amanda Gorman was announced as the first-ever National Youth Poet Laureate in 2017, the attention was, quite rightly, placed on her preternatural abilities as a wordsmith. Then 19 years old, she performed her original poem “In This Place: An American Lyric” at the Library of Congress, weaving a story of contemporary America that touched on everything from DACA to mass shootings to the Charlottesville riots, while still maintaining a sense of beauty and hope. The piece now sits in New York’s Morgan Library & Museum alongside works by some of the greatest figures from American literary history.

All the same, Gorman’s keen eye for fashion didn’t go unnoticed. Embracing the possibilities of style as a storytelling device all of its own, her love of color and bold prints at events and readings caught the eye of Prada, who invited her to their Milan Fashion Week shows throughout 2019. It was no coincidence, then, that when Gorman was preparing for the event that would catapult her to global fame—namely, her showstopping recital of “The Hill We Climb” on Inauguration Day in January—Prada was the obvious go-to when she found herself looking for an outfit ahead of the event.

As she tells Doreen St. Félix in the cover story for Vogue’s May issue, Gorman first texted her contact at Prada was just five days before—“back then the one fashion house with which she had a connection,” St. Félix adds, with an anecdote later in the story noting that the sheer volume of flowers sent by brands afterward was so abundant that they may have potentially triggered an allergic reaction that ended up sending Gorman to hospital. Despite the last-minute nature of bringing the look together, Gorman still approached it with the same care and consideration she did every other aspect of her performance. “Gorman loves how [clothes] help her shape her image,” St. Félix writes, retelling the story behind the genius styling twist of Gorman repurposing the red satin headband as a kind of diadem, and explaining that it was her mother’s suggestion to place it at the fore of her head and wear it like “a tiara, a crown.”

It wasn’t just Gorman’s extraordinary way with words, her poise, her crystal-clear oration, or even the essential lyricism of her poetry that made the world sit up and take notice when she spoke on Inauguration Day, but also the profound care and thoughtfulness in how she presented herself. After all, Gorman thinks of herself as much a performer as she is a poet. “The idea that I would have to recite this poem in front of other people was daunting, but also a really powerful and important and beautiful part of it too,” she said in an interview with Vogue on the eve of her inaugural reading back in January. “The oration of poetry I consider to be its own art form and tradition.”

Meanwhile, Gorman also noted the symbolism of her buttercup yellow coat—a nod to Dr. Jill Biden, who recommended Gorman for the gig and had complimented the yellow outfit Gorman wore when she first discovered her—as well as the Oprah-gifted jewelry featuring a caged bird in reference to Gorman’s forebear, Maya Angelou, who delivered a poem at the Clinton inauguration in 1993. “I’m glad we can talk about the fashion, because it has so much meaning to me, and it’s my way to lean into the history that came before me and all the people supporting me,” Gorman added at the time.

With Gorman’s remarkable attention to sartorial detail, then, it came as little surprise to see her stake her claim as a style star in the months following. Appearing at the Super Bowl in February to recite her poem “Chorus of the Captains”—one that saw her become the first poet ever to perform in the sporting event’s seven-decade history—Gorman opted for a shiny sky blue coat with crystal embellishments by Moschino, this time topped off by a headband crafted from shimmering pearls. And even while posting to Instagram, Gorman has offered plenty of fashion inspiration: most memorably, perhaps, with a dramatic Alexander McQueen gown she wore for a fitting with her stylist Jason Bolden. “Queen tings,” Bolden captioned the post; “dressed up for whattttt,” Gorman cheekily replied.

Indeed, for all the impressive cultural literacy that underpins Gorman’s style choices, at the end of the day, it’s really the simple yet palpable sense of joy she finds in clothing that radiates strongest. Whether the joyous sunburst of canary yellow of her coat at the inauguration, the opalescent sparkle of a Chanel jacket in an Instagram post by her stylist, or the regal, Kente cloth-inspired Louis Vuitton dress she wears on the cover of Vogue, Gorman understands and embodies the chameleonic possibilities of clothes to shape who we are and how we present ourselves to the world. It’s this balance of creativity, intellect, and good old-fashioned fun that makes Gorman a new kind of American style icon.