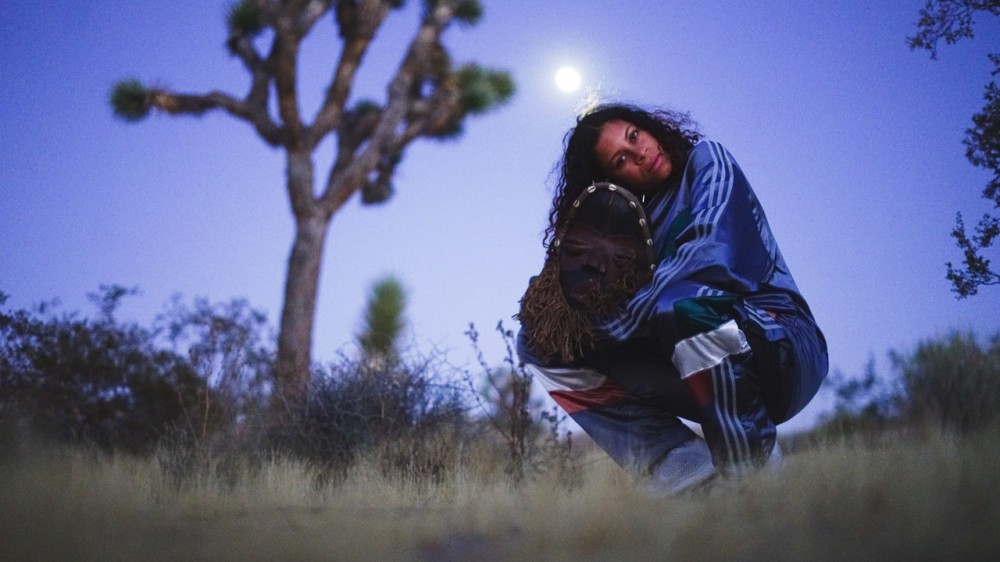 When it came to settling on the title for Aluna’s first solo album, Renaissance, her choice of the historically-weighted word was both subversive and very much intentional. Contrary to the popular understanding of the European Renaissance as an isolated movement, it was the product of cultures far and wide—mathematicians from the Arabian Peninsula, precious stones and pigments from the Middle East, artisans and shipbuilders from North Africa—a unique moment of intellectual cross-pollination that came together to form an eclectic cultural tapestry for which Western Europe took most of the credit.

The irony of this common misunderstanding is not lost on Aluna. “I’ve always loved a period drama, even if I probably had never questioned any of it when I was younger,” says the British singer, sitting in her home in Los Angeles against a wall of guitars. “I love the costumes, the wallpaper, the gilding, the patterns. And then I was like, ‘Isn’t that funny that you love something you see nothing of yourself in. Nothing at all.’” The album cover features Aluna cosplaying as the Mad Hatter among a similarly richly costumed group of friends, all set against a Titian blue sky—for that added Renaissance touch, of course.

But the aesthetic universe Aluna has conjured across the record’s videos and visuals go further, too, referencing everything from the traditional dress of ancient West African royalty to the Ankara fabrics that drape and dramatize British-Nigerian artist Yinka Shonibare’s sculptures. It’s a rich patchwork of global cultures carefully configured to reflect the album’s equally continent-hopping sonic palette.

To understand how Aluna managed to firm her grip over such a wildly eclectic range of dance sub-genres, you have to start with her initial rise to fame as one half of the alt-pop duo AlunaGeorge. Banding together with producer George Reid in 2012, the pair rode an initial wave of buzz following up-and-comer nods from the BBC and the BRITs, before subsiding to a steadier pace over the following years. While their two critically-acclaimed albums, Body Music and I Remember, might have been packed with slinky, irresistibly catchy pop gems, it was a collaboration with the house revival duo Disclosure, 2013’s “White Noise,” that gave Aluna her biggest hit, peaking at number two on the UK singles chart.

Around two years ago, though, Aluna wanted to try something different. “I learned so much from working with George,” Aluna explains of her current hiatus from the band, “but it was a conscious decision to step away.” There’s no bad blood, she hastens to add: it just reached a point where she wanted to express herself on her own terms.

“There’s a point at which you have to get to know yourself, and as a biracial Black woman, I realized so many of my sides were rejected, and subject to colorism,” says Aluna, who grew up in a rural county just north of London, born to an Indian mother and Jamaican father. “All of that felt too complicated to even bring into my career. When you start out, everything is geared towards, ‘What’s gonna get me through the door?’ It’s like, ‘Girl, don't bring any baggage that you don’t need. You’ve got a voice, you know how to make songs, and you know how to make people dance and feel good. Just stick to that. Leave yourself behind.’ But there’s only so long that a person can do that. I needed to find out what happens when I look at my musical heritage and mix it all together.”

So mix it together she did. Across Renaissance’s 14 tracks, Aluna flits seamlessly from the raucous dancehall of the Princess Nokia-featuring “Get Paid” to the sensuous, rippling groove of “The Recipe,” crafted alongside maverick Canadian DJ Kaytranada and featuring a delightfully playful back and forth between Aluna and the Nigerian Afrobeats star Rema. On lead single “Body Pump,” meanwhile, Aluna’s silky vocals swirl over a bullish, club-commanding beat, before erupting into a thrilling ode to the hedonistic pleasure of tearing up the dancefloor “all night long,” to quote Aluna directly. Building the visuals around the album may have been a painstaking process, but on a sonic level, the sheer amount of fun Aluna found in making the music itself radiates from every track.

“I never approach my music itself as a political statement,” she notes. “The name of the game for me when I'm making music is: Do I feel it in my body, does it make me want to dance, does it uplift, does it tell a story? For me, politics and activism are an adjacent endeavor. It's a different skillset. You have to combine research with passion, with pain, with stories, with facts, with articulation. I don't try and fit that into my music, but it's definitely the holy grail for me to be able to add all of that as a person alongside my work as an artist.”

It’s this reconciling of Aluna’s creativity and political advocacy that has become one of the most fulfilling new outlets for her over the past year—coming across vividly in a documentary video produced alongside the album, premiering on Vogue, in which Aluna offers an insight into her recording sessions in Los Angeles. One of Aluna’s key objectives with Renaissance was to celebrate the rich tapestry of dance music that has inspired her throughout her career, and more specifically, to honor its genesis within the underground Black, Latinx, and LGBTQ+ communities across Chicago and Detroit during the birth of house in the 1980s. “I wanted to champion the Black women who were the foundations of dance music, and who were either exploited or forgotten,” Aluna adds. “I saw how hard it was for Black women to continue to make that music and many people consider it a white genre, then I realized what I'd taken on.”

For Aluna, the subjugation of minority voices within the history of dance music is something that she can trace directly through to her own feelings of discomfort when first trying to break into the music industry back in the early 2010s—particularly when it came to developing her style. ‘It wasn’t a conscious thing, but having already been rejected for my Blackness, I was like, ‘Let me style myself,’” Aluna remembers of her initial meetings with the band’s first team. “In my mind, I was styling myself for fashion. But bearing in mind that fashion was white, so I had to leave behind my Blackness. I straightened my hair for the first time. I became a vessel for the voice and that was it. I was an instrument. I stayed as neutral as I could, and I did get accepted by the fashion industry during the first part of my career. I felt I’d achieved something, but I was also extremely depressed.”

Things changed when Aluna began hand-making her own clothes, crafting outfits inspired by boxing suits that blended her interest in masculine shapes with a touch of glamour. Another turning point came when shooting a video for her collaboration with Skrillex and Diplo as Jack Ü in 2015, where she decided spontaneously on set to wear her natural hair. “I had no clue what to do with my natural hair and I didn't have a Black hairstylist on set with me, so I cried a lot,” Aluna says. “But when I look back now on all the times I dared to do that, I appreciate my bravery, because it eventually led to an embracing of myself. To anyone who makes that transition, they can agree it's quite painful. But as you build your confidence and your sense of self, you feel beautiful. You're fighting against the white beauty standards that run the entire world.”

It’s a fight Aluna isn’t giving up on. Following the renewal of energy behind the Black Lives Matter movement last May prompted by the killing of George Floyd, Aluna published an open letter to her peers in the dance and electronic music community, advocating for a more inclusive future for their industry, receiving signatures from the likes of Diplo, A-Trak, Kelis, and DJ Snake. More recently, she has been working with the legendary Nigerian record producer Don Jazzy to co-curate a compilation featuring an eclectic range of Black musicians, with all proceeds going to support the HIV/AIDS charity (RED)’s efforts to mitigate the impact of COVID-19 on life-saving antiretroviral programs in sub-Saharan Africa.

For all of Aluna’s tenacity and political engagement, and as the dust begins to settle around her album campaign, she’s finally feeling content to take some downtime too: in no small part thanks to the birth of her first daughter, Amaya, with whom she became pregnant two months into the Renaissance recording process, and recently turned one. It seems just another reason explaining why Aluna is more comfortable in herself than she’s ever been before. “I had to accept that I was an outsider to dance music when I started this record, and I’m basically going to be breaking rules that are not even mine as a Black woman to break,” she concludes. “But I was like, whatever. I’ve done that my whole career.”