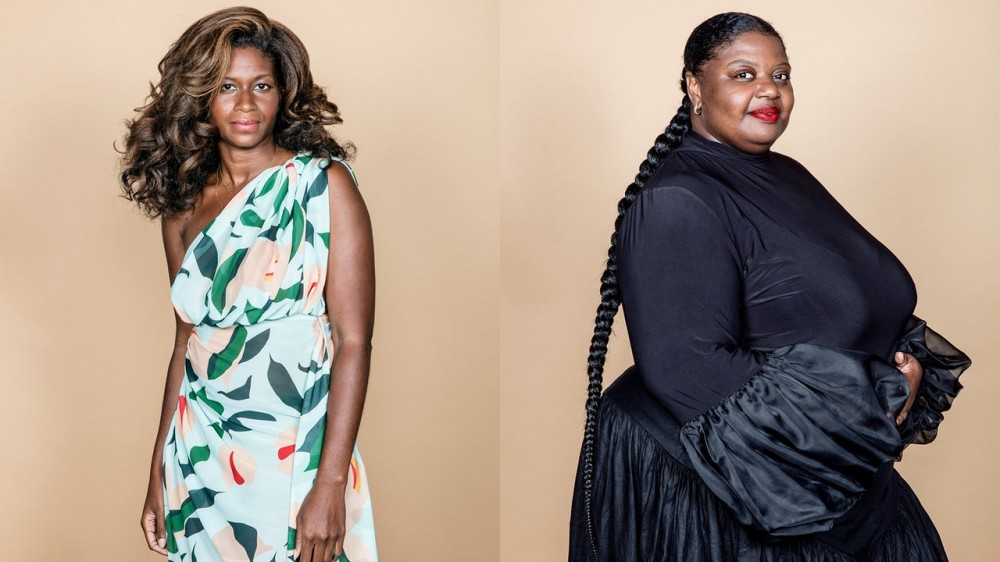 TRADITIONALLY, November has been the month when the latest crop of CFDA/Vogue Fashion Fund finalists is formally introduced in the pages of this magazine, but for the first time in its history, that celebration has been deferred for the year. Back in March, as the orders to shelter in place were sweeping the country and the devastating economic impact of the pandemic was beginning to be felt by the fashion industry, it quickly became apparent that an immediate response to the crisis was required, and within a matter of weeks, the fund was repurposed under the umbrella A Common Thread to relieve designers and fashion brands facing severe financial hardship.

Just as the original Fashion Fund was launched in the wake of 9/11 to foster a new generation of designers, this new effort underscores the urgency around mentoring and supporting new names. Of the many designers who received grants from A Common Thread, three rising fashion labels stood out for their distinctive points of view—and we wanted to amplify their voices. Between Fe Noel’s female-led approach to community building, Sukeina’s ambition for the craft, and Studio 189’s commitment to activism, this trio represents a considered and forward-looking way of creating fashion.—Chioma Nnadi

When Felicia Noel couldn’t find the clothes she wanted to wear, she rolled up her sleeves and got to work. The Brooklyn-bred designer kicked off her fashion career at 19, starting a vintage boutique specializing in streetwear. Noel’s nostalgic supply of Coogi and Fila satisfied her teenage obsessions, but her biggest takeaway was the need for new perspectives in womenswear. To that end, Noel set out to create clothes that honored her Caribbean heritage while channeling the high-drama wardrobes of ’70s muses like Bianca Jagger and Diana Ross.

The pastiche of influences is what makes Noel’s work exciting. Delivered in sorbet colors and shimmering textures, her separates have a cheerful, lighthearted quality, but the nods to Grenadian culture add another layer of enjoyment. Along the way, photographer and creative director Itaysha Jordan has helped Noel refine her perspective. The pair connected after a stylist pulled Noel’s pieces for a shoot and Jordan quickly became intrigued. “She came to my studio and shared an idea [for a shoot] ,” says Noel. “I said yes, and we haven’t been separated since.”

Together, Noel and Jordan have distilled their mix of influences into a singular look that pays homage to Noel’s heritage and her pop-culture obsessions. The line’s graphic “nutmeg” prints acknowledge Grenada’s chief export, while the ruched tops and crop tops with puffed sleeves allude to the ease of island life—a relaxed yet refined vibe that has been embraced by fans such as Michelle Obama and Gabrielle Union.

It’s still rare for two Black women to be at the helm of a fashion house, and Noel is eager to see an industry where creatives of color are granted the same opportunities as their white peers. “It’s long overdue; I want to see the change happen in our generation,” she says.—Janelle Okwodu

When Brooklyn-based Omar Salam began his brand, Sukeina, in 2012, he had a vision. Fresh from stints at Sonia Rykiel and Christian Lacroix, Salam wanted to infuse grandiose Parisian luxury with his Senegalese and Mauritanian roots. At the time, the concept seemed radical, but eight years later, the rest of the world has caught up with his Afro-futurist vision. With their extreme silhouettes and ultrafeminine details, Salam’s designs command attention. Still, his alpha female clients—Naomi Campbell, Natalia Vodianova, and Netflix CMO Bozoma Saint John among them—would expect nothing less.

Salam’s behind-the-scenes collaborators reflect the same spirit of strength and elegance. His muse, Love & Magic Company cofounder Oshoke Abalu, is reimagining the workspace to foster diversity, and the tenets of her innovative “symphony” program, which gives companies the tools to recruit and support employees of color, align with Sukeina’s core philosophy. As she inspires his clothes, he provides her with valuable feedback on the curriculum she’s developing, though Salam is modest about claiming any credit. “I’m the midwife,” he says. “It’s her baby.”

Salam’s partnership with creative director Dimeji Alara has been equally fruitful. Impressed by Alara’s encyclopedic knowledge of fashion history when the two met at a 2016 fashion event in Lagos, Salam quickly befriended Alara. “He understands the way I think,” says Salam.

Connecting his collection with real-world issues is something Salam is passionate about. In the past year he’s seen the fashion industry evolve into a place where his dedication to social justice and politics has become part of the broader conversation. Still, Salam wants it to go a step further. “There are so many layers to it,” he says. “What’s happening now is wonderful, but we have to hold fashion accountable, or all this effort could end up being flushed into the wilderness.”—J.O.

Friends who can travel together can do great things together—at least that’s the case with Abrima Erwiah, a multilingual fashion executive, and activist and actor Rosario Dawson. These two powerhouses had always wanted to collaborate, and an epic 2011 trip from New York to the City of Joy in the Democratic Republic of Congo (a female community for survivors of gender violence in that country)—with stops in Philadelphia, London, Kenya, Burundi, and Rwanda along the way—provided proof positive that they could work together. “The universe has a way of telling you what you’re supposed to do,” says Erwiah, “if you just listen.”

In 2013 they founded Studio 189, a brand that has become known for beautiful handworked pieces that make use of artisanal techniques like kente weaving, recycled-glass beading, and embroidery. There are hand-batiked cotton skirts in vibrant colors and patterns that have a sumptuous fullness, indigo-dyed pants with a liquid drape, and up­-cycled patchwork separates. Unforgettable, too, are long, joyous dresses with romantic sleeves.

Studio 189, based in Ghana and New York City, could be described as a sustainable lifestyle brand, but it also provides training and work—not charity—to local artisans. A Ghanaian illustrator who worked with the brand is now a Gucci fellow, for example; another alum is now studying for a master’s degree at FIT. “Sometimes people need to see people that look like them do things to believe that they can do those things,” says Erwiah.

The connection between Erwiah and Dawson is fueled by a shared mission to do good in the world by linking heritage to the future, clothing to nature, hands to garments, and Africa to the world, by demonstrating the interconnectedness of us all.—Laird Borrelli-Persson