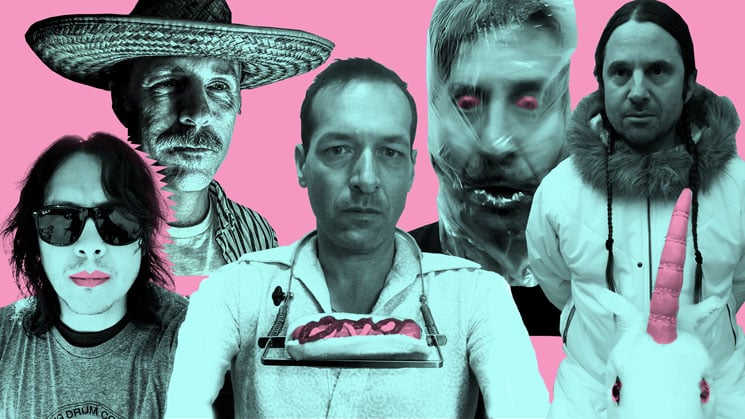 “It’s just a relationship like any other relationship,” Rick Froberg tells Exclaim! about his 30-year friendship with John Reis. “If you have friends you collaborate with, and you like it, it works good, you might as well keep doing it. Why not?”

The pair first played together in the late 1980s in a San Diego band called Pitchfork, before altering mid-’90s underground rock in the expansive, ferocious post-hardcore band Drive Like Jehu and then again in the comparably more succinct and frenzied Hot Snakes.

Reis is a wildly inventive, idiosyncratic guitar player and music arranger, while Froberg is well-regarded for cool guitar parts but also for keen, observational lyrics and one the most goosebump-inducing howls in rock.

After a six-year run that included three perfect punk rock albums — 2000’s Suicide Invoice, 2002’s Automatic Midnight, and 2004’s Audit in Progress — Hot Snakes initially called it a day in 2005. But when Les Savy Fav invited them to play a show at a curated All Tomorrow’s Parties festival in England in 2011, Hot Snakes hit the road again for a tour, prompting fans to clamour for a new record.

Now, with Sub Pop releasing the monstrous, stellar Jericho Sirens, Hot Snakes (which also includes bassist Gar Wood, original drummer Jason Kourkounis and his replacement Mario Rubalcaba) are back, and Froberg and Reis — as significant as any creative coupling in modern music — are together again.

“We just wanted to stop for a while and so we did,” Froberg says about their initial breakup. “I remember Gar saying ‘I don’t really feel like doing this right now,’ and everyone else was like, ‘We’ll stop.’ There’s no dramatic backstory to make it more interesting. Bands stop, and they should. If you reach a point where you’re getting kind burned out on something, you should stop.”

Froberg left California for Brooklyn some 20 years ago, so his social connection to Reis was marred by at least a bit distance. Reis kept himself prolific, running his Swami Records imprint and tending to his other bands, including Rocket From the Crypt and the Night Marchers. Froberg, a gifted visual artist, also started a new band called Obits with friends in NYC.

After the Hot Snakes reanimation tour, Froberg told his bandmates that he was done with Obits, who subsequently split up (re-configuring as Savak). And then, in an American underground rock shock that may only be rivalled by Fugazi playing a show somewhere at some point, Reis got Drive Like Jehu back together for a short outdoor set in a San Diego park on August 31, 2014, which led to touring around the world.

When asked if being away from, and then back together creatively again, with Reis had any pround impact on him, Froberg is typically evasive.

“Probably,” he begins. “My admiration for and friendship with John hadn’t really diminished. I was in a different band, but it wasn’t because, ‘To heck with this guy.’ I just wanted to start a band with my friends here. It’s nice to work with him and having been in different bands for a while, we bring those other things with us back to this. I think it’s good that way.”

Over the years, Reis and Froberg have been asked if all that Drive Like Jehu or Hot Snakes road work could lead to new songs and each have, understandably, said things like ‘I dunno, we’ll see, who knows?’ Froberg suggests that it wasn’t apprehension about whether they had material, but really just determining if everyone involved really wanted to open up the writing-recording-touring can worms that reactivating Hot Snakes would entail.

“I initially just flew out there and played with John and we wrote some things,” Froberg says a California trip. “Then we all got together in Philadelphia and we decided that we would actually record some songs. We got together to get at least enough songs to go there and record.”

Somewhat unusually, the Hot Snakes reunion is so complete, it features both Kourkounis, who started the band with Reis and played on their first two records, and also Rubalcaba, who took over when Kourkounis left. On Jericho Sirens, Kourkounis drums on seven songs, Rubalcaba on three.

“They both wanted to play and on the initial reunion tour, so they each played on the songs they originally played on,” Froberg explains. “When we decided to make an actual record, they were both welcome to join in. We couldn’t really say ‘You can play and you can’t.’ And they’re both fantastic drummers, so it’s a good problem to have.”

It’s a sentimental anomaly sorts and fitting for Hot Snakes’ Jericho Sirens, the first album newly written and recorded songs by Froberg and Reis since 2004.

“We’re just friends like anybody else and we like to play in bands together I guess,” Froberg says Reis. “We like this kind music and think there’s a lack things like it out there that we want to go see. I guess we’re trying to fill that void by doing it ourselves. It doesn’t come out exactly like the things you’d like to listen to but it comes out as you.”

Listen to this interview with Rick Froberg on Kreative Kontrol Apple Podcasts or below: