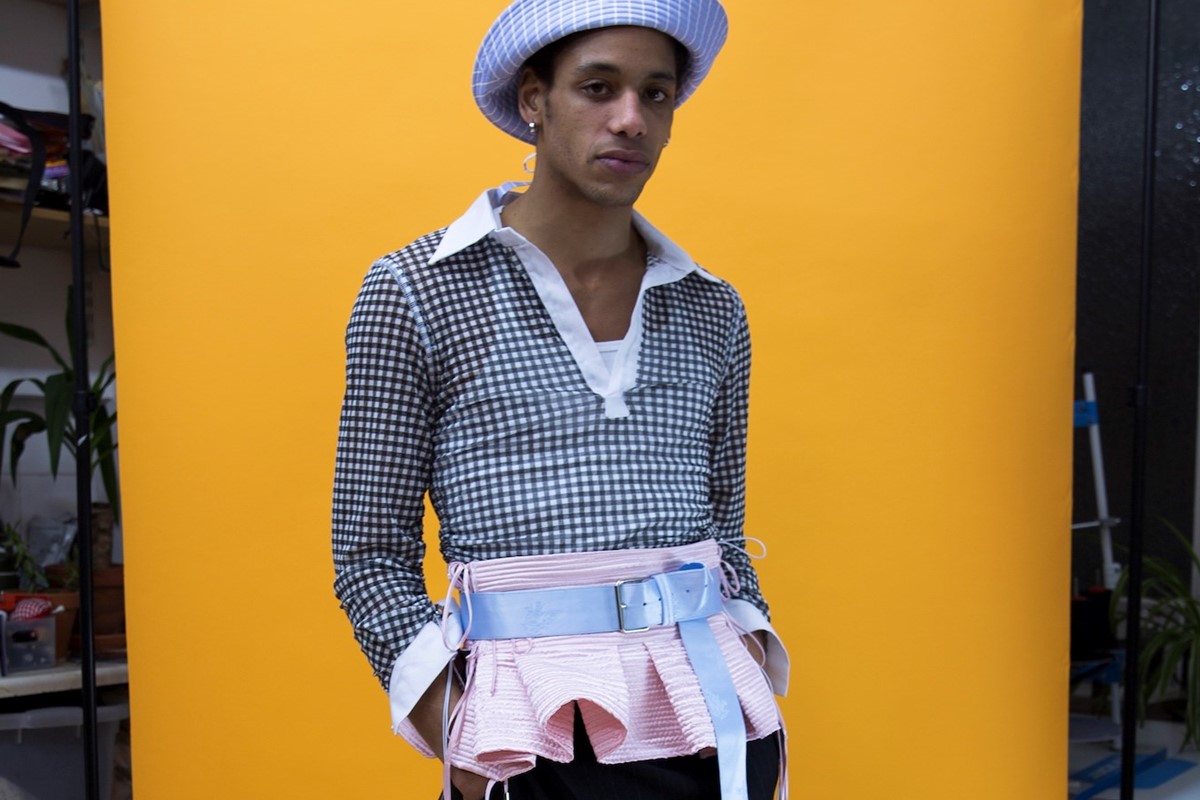 What you need to know about the AW21 shows

It may seem like the SS21 shows took place approximately six minutes ago, but toot toot! The fashion train has rolled into the station once more. With New York’s latest outing done and dusted, right now, we’re standing on the precipice of London’s AW21 season, poised and ready to chuck ourselves in. With big hitters including Burberry and Simone Rocha appearing alongside a host of the city’s brightest rising stars – the likes of GOOM, Saul Nash, Ahluwalia, and the Fashion East lot among them – we’re rounding up everything you need to see here. Keep checking back as we’ll be updating as we go, and head to Dazed Fashion’s dedicated Instagram for more LFW news as it happens.

Where last season Rory Parnell Mooney’s collection dove into doomscrolling, for AW21, the London-based designer referenced the before times, merging office workplace culture with a nod to DIY flyers – the hero of his new season video was a printer. “It’s a kind of continuation of last season,” the designer wrote on Instagram. “Making pieces by instinct that felt good to wear and imaging a future where we can dress up and be together again.” Translated to cloth this meant looks made up of matching bleached denim, snakeskin trousers with lace-up fronts (a common detail throughout the line-up), and a spectacular pair of elbow high net gloves adorned with delicate bows.

Having been stuck back at home in York since lockdown first began, Matty Bovan’s imagination ran away with him this season, as he presented a three-part collection heavy with concept – and a glitchy, strobe-lit film to match. Following three intrepid explorers out on the high seas, things begin to go wrong as they’re swept up in a static-y storm  – a reference to “humanity’s constant survival against external forces, and the battle with reality,” his show notes revealed, and something we can all probably relate to right about now. Just visible in-between the glitches was a largely upcycled collection made up of classic Matty silhouettes, many of which were littered with shiny discs, Swarovski crystals, and safety pins. Elsewhere, warped and distorted knits clashed against similarly busy prints, while belts were doubled up and long knitted gloves further played up the reference to the sea.

Harris Reed’s star was ascending even while they were still enrolled at Central Saint Martins, with Alessandro Michele, Miley Cyrus, and Harry Styles among their champions (you may recall the moment Styles basically broke the internet in the designer’s clothes back in November). Marking their first formal offering since they graduated from the revered fashion school, now, Reed presents For Now, Untitled – a demi-couture collection made up of just six looks. Continuing their ongoing exploration of gender, skintight, satin dresses fan out at the knee into layers of tulle, while slick, tailored jackets are finished with cascading chiffon trains. As worn by an all-male cast of models, elegant feather headpieces designed in collaboration with milliner Vivienne Lake complete the looks.

Described as “an ode to emotional struggle, depression, isolation, fear and all ‘tortuous’ feelings,” Greek designer Eftychia Karamolegkou has tapped into the collective psyche with her AW21 offering, Life Before Birth. While she reserves those sentiments to arriving at this latest project, the wider familiarity is plain. Most of us, sadly, haven’t had the same artistic necessity to warrant the motions of the new collection’s accompanying video though; directed by Polly Brown, an uncooked egg meets a smart leather shoe, poured milk floods the floor, and a sheet of ice is smashed on the ground. Of the clothes? This season Karamolegkou continues her focus on tailoring, softening the silhouette with loose trouser styles and collarless necklines.

A year on from the moment Molly Goddard first introduced menswear, the arrival of a red kilt confirmed it was a strong move. Landing four looks into the designer’s AW21 collection, the kilt – and its accompanying suit pieces; five menswear looks in total – hit the right note of smart but casual, riffing on a specific kind of ease that comes from clothing that does all the work. Played out in a yellow room with a single red curtain, the show’s other highlights included a nod to David Bowie (read: bright pink makeup and metallic platform boots), XL-sized denim turn-ups, bow-adorned frocks, and brushed-out hair ideal for prom night circa 1986, and the Lina – a frothy black and bright blue mass of tulle that echoed Cha-Cha DiGregorio’s dancefloor winning dress, layered over a hit of baby blue.

Bianca Saunders’ past presentations have been inspired by dancehall parties and steamy encounters, but this is 2021, and isolation has the Dazed 100 designer looking elsewhere for influence. The Blood of a Poet – Jean Cocteau’s avant-garde (and appropriate) film about a man in isolation – inspires the label’s short, black and white film for AW21, as directed by Daniel Sannwald. A model in a knit sweater, creased to resemble a cropped-top, contemplates their rippled reflection in a bowl of water, or peeks at the viewer through a keyhole. Elsewhere, we see them reclining on a chair in Saunders’ sleek, signature tailoring, before they disappear into thin air.

Since her 2016 breakout, Bethany Williams has concerned her practice with bettering the planet and life for those on board, working with charities and focusing her attention on materials that are organic, recycled, or deadstock. For AW21, the designer continues her work with The Magpie Project, a Newham-based charity supporting women and children under five in temporary or unsuitable accommodation, creating a capsule line of coats exclusively for Selfridges. Produced using secondhand blankets from across the UK and drawing inspiration from a trip to the V&A Museum of Childhood, the mismatched line-up boasts a warm palette of reds, browns, and oranges and a confident mix of motifs. “A blanket is so much more than a piece of fabric – it is a feeling of comfort and shelter and I wanted that feeling to be at the heart of this capsule collection,” she explained in a short video launching the new offering.

Last year, Priya Ahluwalia paid tribute to the “everyday beauty and strength of Black existence” in her documentary-style GucciFest film, Joy. This season, the designer spotlights “the spirit of migration, brotherhood, and unity” in Traces, the atmospheric visual that accompanies her namesake label’s AW21 collection. Directed by Dazed 100 alum Stephen Isaac-Wilson, the stunning film is soundtracked by – and quite literally revolves around – musician cktrl, showcasing a collection that caters to just about everyone, juxtaposing high-contrast tracksuits and sharp tailoring. With Dazed family member Nell Kalonji behind the styling, sustainability remains a key theme withing the offering, with deadstock fabrics and repurposed knitwear worn by models moving in dreamy, mesmerising synchronicity. Watch Traces above.

Following his evocative short for SS21 – all blue skies, clifftops and expansive choreography – Saul Nash returned with a new narrative for AW21. Titled Twist, this season Nash delves into the “cultural and societal landscape” that’s surrounded his life, examining themes of honesty, bravery, and acceptance. Flooded in red light, the new video takes on ideas around sportswear and the young men who wear it in a powerful and ultimately beautiful watch. Here, Nash’s pieces – technically led and toggle adorned garments of red, yellow and grey – emerge halfway through as a new bright light floods the stage, ignited by two men kissing. The film ends with those congregated, previously seen quarrelling with one another, forming a tight cluster with their bodies.

A strong advocate for femininity – girlish colour palettes and soft silhouettes are routinely woven into her collections – Yuhan Wang continues to imagine a wardrobe for contemporary women with an air of romance, this season with a nod to Tang Dynasty landscapes. The paintings, traditionally, were always dreamt up by men for men, but for AW21 the Chinese-born London-based designer conjured her own. Presented under the banner Women in Landscape, Wang worked these watercolours into prints scattered throughout the collection, while also playing with exaggerated proportions, faux fur – spotted to match the deer – and black lace.

If you’ve ever stepped across the threshold of the Wallace Collection and into its opulent halls, you’ll understand why Vivienne Westwood has looked to its vast collection of art and curios for inspiration endlessly throughout the years – and while its doors might be locked for reasons we don’t need to spell out right now, that hasn’t stopped the designer from turning her attention to its walls once more. Dropping her latest collection by way of a new lookbook, Westwood channelled 18th century Rococo painting “Daphnis and Chloe” for AW21 – which, in case you’re unfamiliar, depicts a young, nearly nude couple sprawled across each other and surrounded by sheep, in what can only be described as the OG cottagecore fantasy. With Westwood’s signature mish-mash tailoring, classic velvet corsets, and plenty of tartans and tweeds on the agenda for the coming season, standout minis and silk shirts bearing bold motifs of the young lovers themselves were seen layered with Pepto Bismol overcoats and whale net tights. As an aside, the designer also continues to practice what she preaches when it comes to sustainability – with over 90 per cent of the offering crafted from materials with limited detrimental impact on the planet.