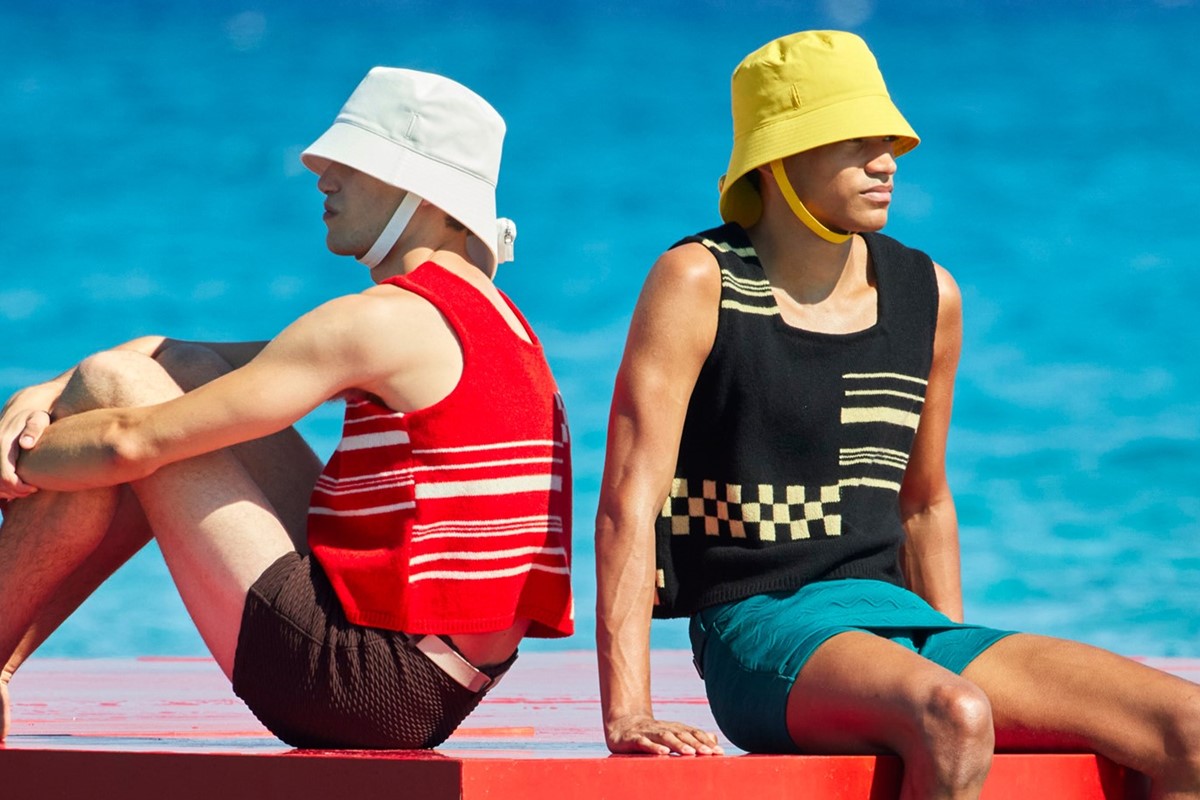 The designer dream team clearly got the five-inch seam memo

The menswear edition of Milan Fashion Week is in full swing right now, and while a couple of brands invited guests to IRL presentations, most designers have opted to continue in a COVID-safe vein and stick to digital shows for now. Among those dropping their new collection via a short runway film was fashion’s fave mom and dad, Miuccia Prada and Raf Simons.

Stepping through the ‘Tunnel of Joy’ to the ‘Utopia of Normality’ – as the show notes not-so-cryptically put it – the designer dream team landed at an idyllic beach for SS22. Out went the chunky sweaters and woolly long johns from AW21, as models stripped off ahead of a dip in the sea (and after god knows how long spent in various states of lockdown, who can blame them?)

Boxy bowling shirts and matching triangle-stamped cool bags in muted stripes evoked deckchairs and parasols, while tailored jackets were slung over bare chests and short-shorts – the epitome of business up top, party on the bottom – as if the models had finished up at their 9-5 but couldn’t resist stomping onto the sand.

Elsewhere, wipe-clean mackintoshes and Sou’wester hats – that called to mind archival pieces from Raf’s eponymous line – spoke of fisherman’s attire, with the chunky cable-knit and slouchy, lace-up sweaters further evidence that he and Miuccia had been looking to the ocean for inspo this season. A succession of shorts and louche button-downs dotted with marine-indebted motifs hammered the idea home – one standout off-white romper suit bearing mermaids, anchors, and a large octopus print to its back.

The pièce de résistance, however, were the looks most likely to cause a stir across social media: namely, the paper bag-like cropped vests and uber-short skorts – which, FYI, is a portmanteau of ‘skirt’ and ‘shorts’ for those that didn’t come of age in the mid-00s. In mod-ish, geometric 70s patterns, with chunky metal belts, the style was seen heavily throughout the collection.

Of course, this isn’t the first time the Italian house has proffered extremely skimpy pants for the boys (throwback to its SS19 show, when Miuccia made a solid case for jorts), but with restrictions hopefully a thing of the past by the time 2022 rolls around, she and Raf are catering for what could quite easily be a hot boy summer. And you know what? Bring it on.

Watch the show above and click through the gallery to see a selection of looks.