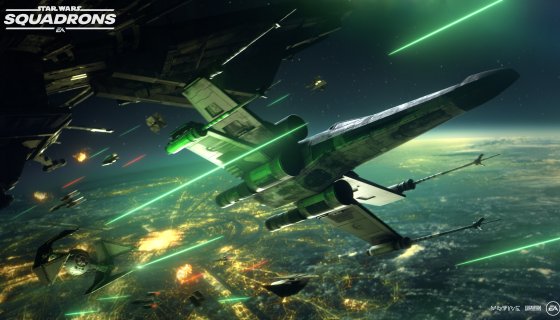 Just because there aren’t movies in the pipeline doesn’t mean there won’t be any new Star Wars-themed games dropping.

EA has been teasing Star Wars: Squadrons since the beginning of the month, and finally today (Jun.15), it pulled the cover off of its newest game based on the insanely popular Disney-owned sci-fi movie franchise. Like the films’ characters Luke Skywalker, Princess Leia, Han Solo, and Darth Vader, the out-of-this-world starfighters also captured that heart of fans as well. In Squadrons, they take center stage once again.

Star Wars: Squadrons will allow players to enlist as a starfighter pilot and step in the cockpits of their favorite New Republic or Imperial Fleet starfighters. Squadrons will feature strategic 5v5 multiplayer space battles where players will battle in space to take out each other flagships in Fleet Battle mode. In Dogfights, you will engage in first-person multiplayer combat and team up with your squadron to take out as many opponents as possible.

Star Wars: Squadrons will also feature an original single-player story that follows the events of the Battle of Endor that led to the destruction of the Death Star II in Return of The Jedi. In the story, players will learn what it takes to be a pilot while experiencing the story from two alternating perspectives as members of the New Republic’s heroic Vanguard Squadron, while the other fights for the Galactic Empire’s fearsome Titan Squadron. The new story will feature original new characters as well as cameos from your favorite Star Wars heroes and villains.

Players will also be rewarded for their play as well with rich cosmetic and gameplay customization options with rewards and bonuses. No X-Wing, Y-Wing, A-Wing, Tie Fighter, Tie Bomber, Tie Interceptor, or pilot will look the same thanks to cosmetic items that will change the appearance of your character and ship’s cockpit and exterior.  As you move up in the ranks, you will be able to upgrade your starfighter’s performance by earning new weapons, hulls, engines, and shields.

Star Wars: Squadrons hopes to have the same success as EA’s single-player adventure . We just hope they forego the microtransactions that plagued Star Wars: Battlefront II that took the fun out of the otherwise solid game.

Star Wars: Squadrons is now available for pre-order and will cost $39.99 and arrives on October 2 for EA Access, Origin, Xbox One, PlayStation 4, PC, and VR. Oh, it will also feature cross-play. Due to there being this year because of the COVID-19 pandemic, EA is improvising and will showoff some gameplay on Thursday, June 18. Until then, you can check out the reveal trailer for the game below.