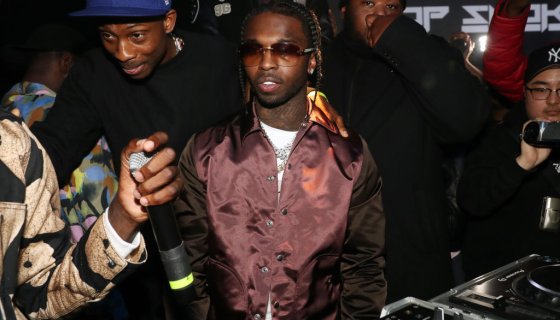 As the shocking news of the death of Bashar “” Jackson’s death sends shockwaves throughout the industry, fans on Twitter are trying to make sense of the killing. Many of the Brooklyn rapper’s colleagues and fans have taken to the social media network to express their sorrow.

Pop Smoke was just fresh off of releasing his second commercial mixtape Meet The Woo 2, an acclaimed collection of the gruff-voiced rapper’s signature style complete with gritty tales from life on the street. The buzz surrounding Pop was growing at a rapid rate and his alignment with Steven Victor’s Victor Victor brand and imprint put him in some rooms that solidified his budding star status.

Beginning last year, Pop found himself in the conversation as one of Hip-Hop’s brightest young talents by way of his hit song “Welcome To The Party,” which featured a verse from Nicki Minaj on one version and Brit rapper Skepta on another. He also made a scene-stealing turn on Travis Scott’s JackBoys compilation album and was also featured on H.E.R.’s “Slide” remix alongside A Boogie Wit Da Hoodie and Chris Brown.

Pop also has a single from Meet The Woo 2 currently moving titled “Shake The Room” featuring Quavo, and the track “Dior” from the same project had begun to make some noise on the charts. Fans on Twitter noted that Pop was enjoying his time out in Los Angeles after noting that he shared images and videos of him enjoying his time out west.

We’ve collected as many reactions we could find in a short time related to the news of Pop Smoke’s unfortunate passing below.

R.I.P to my man Pop Smoke, No sympathy for winners. 🕊God bless him pic.twitter.com/5ZFa5ILUzl

Made it out of Canarsie and STILL.. super sad. RIP to #PopSmoke

I am so sorry for your loss @StevenVictor

RIP Pop Smoke. The world is crazy man. Full of jealousy and hate. Find your happy and go ghost on the world. Never give them too much information. Keep to yourself and your space!

Dawg… freaking Pop Smoke? Wow come on man. This is getting CRAZY

Too much hate in this world man, for what though? 🤦🏽‍♂️ RIP Pop Smoke

Saddened to hear about Pop Smoke, Condolences to his family, friends and everyone at Victor Victor Music.

Streets full of haters the streets don’t love you when you make it R.I.P Pop Smoke

Pussy ass took his life just over materialistic things? Shit ain’t even worth taking a life over.

Wow RIP Pop Smoke!! He was just getting started!! Envious people!! Sometimes success can really be your downfall which is so not fair!! Something really strange is happening in the air..everyone keeps dying unexpectedly it’s so sad 💔