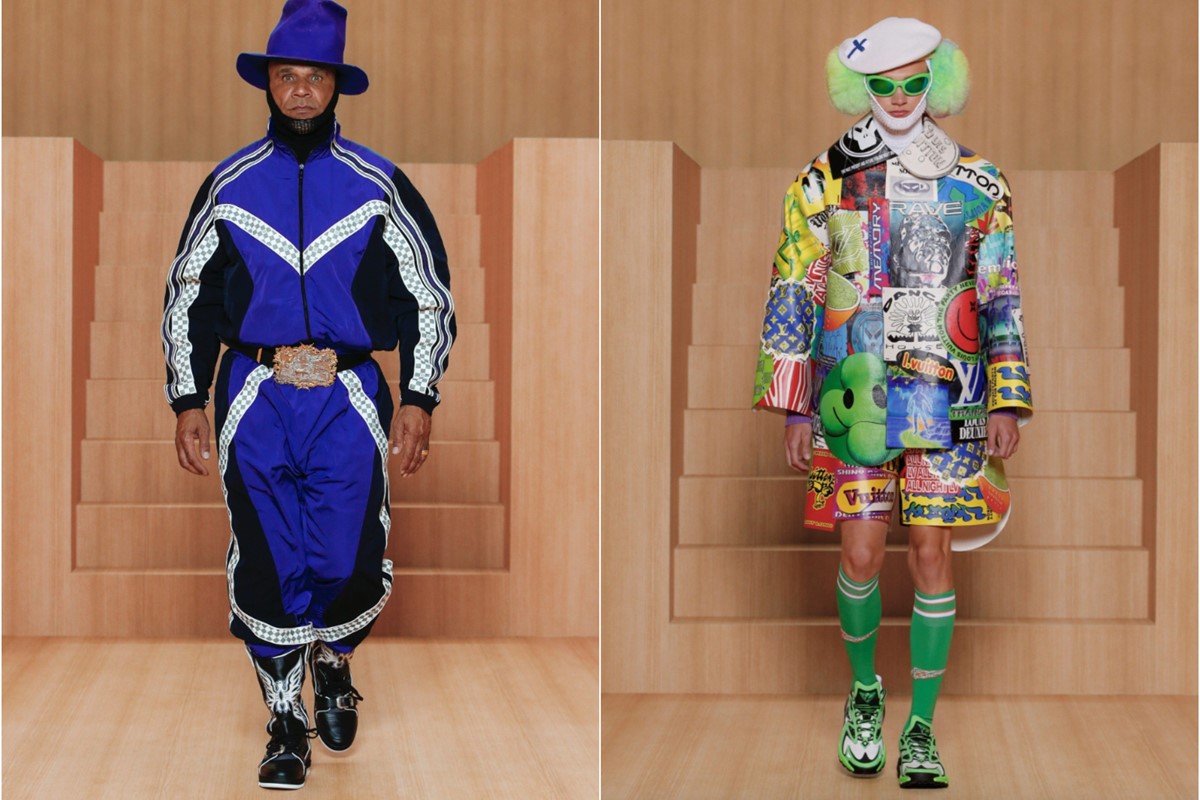 This morning, Virgil Abloh announced on Instagram that he would be skateboarding to the premiere of his seventh Louis Vuitton show, noting that he was “thinking different”. A few hours later and it was clear why. The designer’s SS22 collection came together as a freaky, magpie mishmash of disparate style tribes, cultures, and archetypes. Styled by Dazed editor-in-chief IB Kamara models were bundled into layers of clashing checkerboard prints, tightly cinched hoodies, vivid snoods, and Kurt Cobain sunnies – speaking to a wider shift from cohesive, total-look dressing to lively, exuberant expressions of personal style. Here’s everything you missed.

THE INVITES WERE PARLOUR GAMES

This season, LV delivered sets of parlour games to expectant editors and influencers. The house’s Damier motif was stamped across a puzzle, playing cards, and a magician’s cup-and-balls (not to be mistaken for a beer pong set) – perhaps in reference to the rigmarole of lockdown, where people legitimately turned to quaint party games in a desperate attempt to stave off boredom. Obviously, nothing was quite what it seemed. This is literally from the designer who sent out a backwards clock, remember. The puzzle was allegedly near impossible to complete and Abloh had replaced the traditional characters within his deck of cards with historical Black figures. It was a signal of what was to come. A collection that urged you to think a little deeper – full of strategic alliances, trickery, and double bluffs.

THE COLLECTION WAS PRESENTED WITH A BROODING FILM

In the opening scene of this season’s film, dubbed Amen Break, two samurai figures paced through a barren, mountainous passageway, their cloaking, monastic skirts scraping over the dry stone underfoot – it was a cold, foreboding entrance to a surprisingly vibrant collection full of bold silhouettes and kaleidoscopic references. Though a seemingly incongruent start, it soon became emblematic of the 17 minutes of sudden turns and contradictions which were to follow.

IT WAS A COLLECTION OF OPPOSITES

As we followed Vuitton’s ninjas across barren wastelands, into a portal, and through a forest rave, viewers were met with sparring style tribes. This wasn’t so much a collection of dichotomies though – rather, it was a statement on the fact that plenty of seemingly polar opposite truths can exist together, in harmony, at the same time. Be it the club kid and the businessman, or the skater and the samurai, Abloh’s collection housed these inconsistencies in a host of hybridised creations. There were tailored jackets which had been blasted with the sleeves of a tracksuit (the standard race track arms swapped out for checkerboard graphics), broad-shouldered suits wrapped up with karate belts, and tie-dye puffers which exploded into distended, flouncy skirts.

These tribes often came head to head, too – a legion of models in sharp, double-breasted suit jackets immediately clashed with a gaggle of hyperactive ravers, complete with cyberdog earmuffs, graffitied leather jackets, and transparent trenches, which looked as though they had been festooned in smiley face stickers, rave pamphlets, and acid flyers. Similarly, the classic Louis Vuitton trunks – which were the house’s bread and butter back when it launched in 1854 – were totally reimagined for a new generation of luxury consumer. Think cute, mini side bags, skateboard-sized holdalls, and plenty of iridescent straps. It was, as always, heritage for the hypebeast.

As we approached the end of the film, viewers were led to the warm glow of a dojo center – a cedar wood showdown between rival chess champions and martial arts masters, which lay stage to GZA (of Wu-Tang Clan), who was rapping whilst playing a game of chess. And, as we have come to expect from Abloh, the film features a host of other hip hop legends, too. There’s Goldie (who plays the lead samurai), Saul Williams, Lupe Fiasco and Shabaka Hutchings – all in a continuation of the designer’s championing of Black history. The dojo which featured is even a replica of the Chicago martial arts school that Lupe Fiasco’s father founded in the 80s as an outlet for deprived kids.

Perched on the head of a model gazing deep into Abloh’s sparse forest was a beret tacked with what looked like a Scottish flag. Blink and you’d miss it, but it was there. Though that may seem like an unlikely reference point for the Illinois-born, Paris-based designer, it wouldn’t be the first time that Abloh had mined the highlands for inspiration – his collections often riff on kilt-like skirts, and his Off-White branding is indebted to Glasgow Airport’s logo. So maybe it wasn’t a beret, after all, but the country’s Balmoral bonnet. Only thing missing was Nicola Sturgeon wielding a 2m distance stick from behind the birch trees.

IT WAS LITERALLY COVERED IN CHESS BOARDS

The leitmotif of the show was, of course, chess, which was both a nod to the Louis Vuitton squares and the artwork of GZA’s seminal album Liquid Swords. As such, the checkerboard print appeared in (truly) endless iterations – full body morph suits, multicolour-tiled duster coats, rainbow bags, tonal envelope bags, overlaid on floral jacquard gowns, et cetera et cetera…

THERE WAS A SURPRISE NIKE COLLABORATION

Beneath billowing split-ankle trousers and swooping tailcoats was the first glimpse of Louis Vuitton’s collaboration with Nike. This season, the designer took the brand’s iconic Air Force 1s and stamped them in the LV monogram across 27 colourways (though not all made it into the show). Abloh also offered up a neon orange trunk, embossed in calf leather, with a 3D swoosh tag hanging from the handle – like a very expensive Nike shoe box.