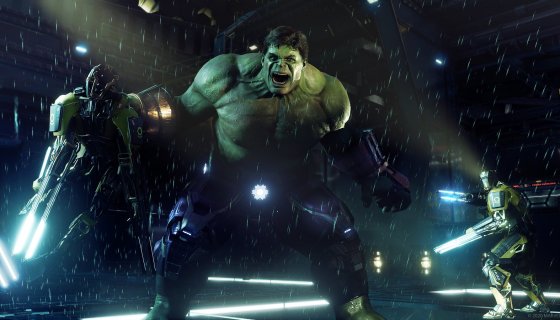 Today (Jun.24), during the first Marvel’s Avengers War Table stream, we learned a great deal about the highly-anticipated game the revolves around earth’s mightiest heroes. Let’s jump into the latest deets, shall we?

Immediately, we learned about “War Zones,” which players can access through “War Tables” that are located in either the Quinjets, outposts, and the bridge of the Chimera Helicarrier. The War Table helps the team keeps tabs on A.I.M., an organization intent on ridding the world of the “Inhuman infection” and convincing the world heroes are trash.

The Helicarrier, which serves as the home base for the reassembled Avengers, can be repaired and upgraded over time. Each Avenger has their own personal quarters on the ship, a fabrication machine where players can design new suits from blueprints and storage for the extra gear you acquire while on a War Zone mission and more.

Unlike the Hero Missions, which are more story-driven and feature more cinematic sequences, War Zone missions turn the game into a more loot-driven expansive, explorable experience for players.

Marvel’s Avengers War Zone Director, Philippe Therien, states each mission will be “loaded with side content including concealed caches to uncover, powerful bounty enemies to defeat, A.I.M. depots to take over, faction allies to rescue, and hidden loot to claim.”

Warzone missions will also be broken up into a variety of different types that players can team up with friends or other players and tackle. They include:

We also got to see some War Zone gameplay as well featuring the God of Thunder, Thor, destroying a bunch of A.I.M. robots while still rocking his mortal disguise.

That’s not all that was revealed, players can look forward to earning perks, rewards, and tons of cosmetic upgrades like the Hulk Buster armor to make your characters stand out during missions. A new story trailer was revealed, giving us even more insight into the game’s plot and revealing that MODOK will be the main thorn in the Avengers’ sides. We also get to see the Hulk battle Abomination as well.

Marvel’s Avengers launches on September 4, 2020, on PS4, Xbox One, Stadia, and P.C. The team will later assemble on PS5 and Xbox Series X holiday 2020. As , if you own a physical or digital copy of the game on PS4 or Xbox One, you will be able to upgrade the game for free on PS5 and .

As an added bonus, PS4 owners will get early access to the upcoming beta when they pre-order the game. You can watch the new story trailer below.