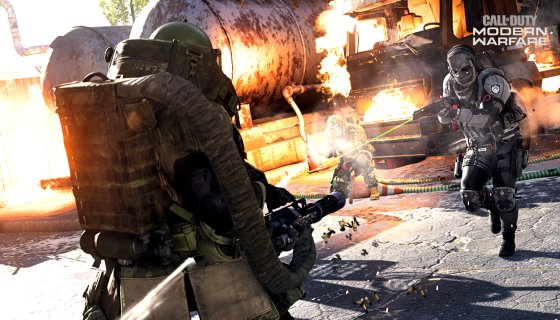 The season 4 update for arrived late last night. So what exactly is new?

Well, for one, the most obvious is the addition of as a new operator, but there is so much more. The battle also hits two new locations, Verdansk and the Armistice. Season 4 also introduces new ways for fans to play COD: Modern Warfare, which includes a new Multiplayer map, Ground War battlefield, and Gunfight map alongside more modes for both Multiplayer and Warzone.

Call of Duty fans was hoping for some changes to the Warzone map. Instead, Infinity Ward is introducing three new “twists” called “Fire Sale,” “Supply Chopper,” and “Jailbreak” that can occur randomly and unsuspectingly altering player’s strategy and approach to gameplay. Here is the breakdown:

Activision points out these “twists” will not always occur during matches.

In ‘Realism’ Warzone follows the same rules as the Multiplayer mode. Players will have a minimal HUD, and headshot damage is increased, so make your shots count in this mode. ‘Warzone Rumble’ introduces a massive 50v50 Team Deathmatch face-off in Verdansk and players will have to arm themselves with the weapons (many of them new) located on the ground and work with your team to outlast the competition.

Warzone players will also be given access to Modern Warfare’s multiplayer thanks to a Free Access Weekend on June 12 at 10 AM PT to June 15 at 10AM PT. Per Activision, players can look forward to playing the latest 6v6 Multiplayer Maps Zhokov Scrapyard and Hardhat, as well as a few other fan-favorites. Also, there will be a Gunfight playlist during the Free Access Weekend featuring seven maps primed for fun, tactical and tension-filled engagements.

Speaking of maps, owners of the full version of Modern Warfare will gain access to these free new maps.

Scrapyard, from Call of Duty: Modern Warfare 2, makes its debut this season, and the small, fun, and frenetic map is just as veterans remember. Watch your six in this resting place for abandoned airplane parts as close-quarters combat, and even snipers can find success here. Consider equipping your weapon of choice with FMJ to fire at targets through the strewn about airplane hulls and stay on the move as this map is bound to get busy.

Warzone players will be in familiar territory in Barakett Promenade, the latest Ground War map, available at Season Four launch. No need to worry about listening for the soft hum of chests but stay alert for the sounds of multiple enemies on the map. Take advantage of building rooftops to add some verticality into your playstyle or come ready for close-quarters combat and do a clean sweep of the interiors. However, you choose to play, be prepared for the heavy arsenal that typically comes with a Ground War battle.

As the name suggests, this Gunfight map is a network of interconnected trenches. Although players can exit the trench to move quicker throughout the map, you’ll expose your position to the enemy, so consider your options. Fast reflexes will serve you well with any weapon and be wary of the glint should you face off with marksman or sniper rifles.

Last but certainly not least, Battle Pass owners will also be rewarded with access to new operators Gaz, Rose, and of course, Captain Price.

Season 4 is currently boots on the ground and stacked with goodies, to get even more details head here. You can also watch the action-packed launch trailer below.