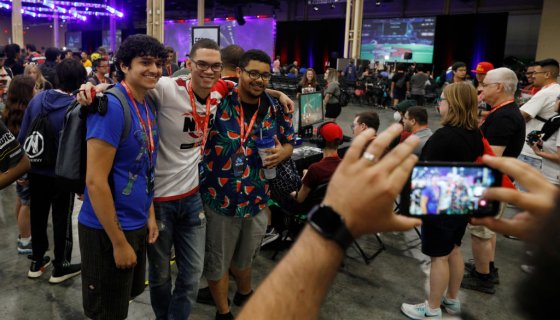 The world is currently being rocked by numerous accounts of involving multiple Super Smash Bros. pros engaging in underage smashing.
Today (Jul.2), Keitaro, Nairo, Cinnpie, and D1 have all been accused of ual misconduct in a series of stunning allegations levied against them. The dominoes began to fall when Zack “CaptainZack” Lauth dropped the bombshell allegation that professional Super Smash Bros. pro, Nairoby “Nairo” Quezada began a ual relationship with him when he was just 15-years-old. Nairo at the time of the incident that was 20.

In a tweet, he shared the detailed account in a Twitlonger post with the caption “I’m tired of living lies.” Lauth came with the receipts, claiming everything went down April 2017 at CEO Dreamland.

I'm Tired of Living a Life of Lies

I started playing in smash tournaments when I was 12 years old. 3 years later, when I was 15 years old, I had my first ual encounter at a smash tournament. CEO Dreamland 2017 Friday night, April 14th, was the first time anything happened with Nairo, him being 20 years old at the time. Luckily I recorded all of my actions with someone on Discord. They’re verifiable with timestamps that coincide with others who I had messaged.

I am not posting this with the intention of canceling Nairo. I simply wish to tell the truth about what happened.

Even though in these messages I am the one initiating, I would just like to remind you I was 15 years old at the time. Nairo was 20, going on 21. I am not going to be manipulated into feeling like this was my fault any longer.

In the post, he also shared screenshots of conversations he had on Discord describing the ual encounter he had with Nairo. He also claimed that Nairo and his brother paid him to stay silent, and as long as he “did his part,” he would receive financial help.

“I was told that by “doing my part” by not telling anyone about our relations, i’d receive financial help from him. The first $2,000 that I was sent was equal to the amount that I would have received from my sponsorship had I not been dropped. This was after the Ally situation came to light, Nairo IMMEDIATELY started calling me because some people were trying to bring our situation to light. These are the July phone logs. The second phone logs(August 13th) are confirmation of him sending the $2,000 after calling me on the phone.”

In response to Lauth’s Twitlonger post, Nairo deleted his Twitter and Instagram accounts, but his Twitch and YouTube accounts are still up. Before he deactivated his Twitter account, he tweeted “confronted Zack about it last year & was extremely furious when he admitted it to me.” Lauth also revealed that Nairo called him insisting that he deny the allegations.

In it, he details his encounter with So Sandy (Shiva), who was just 16-years-old at the time and was intoxicated after a night of underage drinking.

“After some time, she began to rub her face against mine, which eventually made me think she wanted to kiss me. I attempted to avoid it for a couple minutes, but eventually, I went with it and kissed her. After some time of kissing and holding, she began to reach in the pool, and I asked, “what are you doing” and she grabbed my private parts and started touching me. Again, I’m fucking stupid for going along with this. Kept thinking, “okay, this is happening and shouldn’t, but it’ll def not go any further,” although it was already very bad. After some time, she put her other hand in the pool, and I wasn’t sure what she was doing until I felt me inside of her. I yelled, “what are you doing!!??” but didn’t stop anything afterwards.”

Another “smasher” (no pun intended) D1, issued an apology also through Twitlonger to fellow gamer KTDominate after she accused him of rape.

“I never consented to one. thing. with you, and you made me out to be some kind of gross teenager. I had just turned 18. It’s hard not to think of you as a pedophile, but instead just a rapist, “KTDominate wrote.

Popular gamer Cinnpie was also accused of ual misconduct by fellow “Smasher” Puppeh of having an inappropriate relationship with him.

Cinnamon “Cinnpie” Dunson, a Super Smash Bros. commentator, was 24 when she allegedly engaged in ual behavior with Puppeh, who was 14-years-old at the time. In his post, he detailed the numerous ual encounters they had and the mind games she played with him.

“She would tell me things like “we can get together when you are 18″. She would make me periodically delete our Facebook messages and would constantly remind me that I couldn’t tell ANYONE (Even though that was obvious to me.) She would consistently gaslight me and make me question myself all the time while I was only 14 and still trying to find myself as a person. Not being able to tell anyone about my experiences ate away at me constantly. Having to see her after this period hurt me a lot and would consistently distract me at tournaments. I would have to play her in doubles tournaments on a weekly basis pretty much, and she would be teaming with her boyfriend during those times. That would especially hurt me. I was super bitter about the whole thing and would BM every set in doubles I played vs. them (You can still find youtube sets of me doing this at old smash 4 weeklies.)”

This is a lot to process and highlights a massive problem within the professional gaming community. As you can imagine, the eSports and gaming community are reacting accordingly. You can see the reactions to these gut-wrenching tales of ual misconduct in the gallery below.

June 16th. The day before I turned 17. Yes it’s true. Keitaro, False, and Sky Williams know. I know everyone at that party knows. pic.twitter.com/43mcsExDo4

None of them should be accepted by this community anymore by any means. Doesn’t matter how big their impact on Smash has been

3 people that i trusted too. That I thought were good figures in the community. I just can’t

So the code of conduct panel KNEW about Nairo and Zack, but they explicitly denied it until the very last second that they got outed. They all covered for a offender. They all deserve the federal punishment for doing such. https://t.co/Z5jjOLLWuq

Anyone — Tweek, Salem, etc. — who knew that this stuff with Zack and Nairo was going on may have committed a felony, depending on state laws.

Many of you should probably be lawyering up right about now. https://t.co/14tLcE5tCU

Nairo has been let go from NRG https://t.co/UROP2i0zTp

Our money was partly going toward covering up this shit

I just feel so USED man forget that fact he lied he USED us. I feel sick…

NAIRO IS NOT FUCKIN SORRY LOL

HES FICKING WORTHLESS GET THAT INTO YOUR BILLYBOB BRAINS

etika would be really disapointed in the smash community. he's looking down in shame tonight. fuck nairo and fuck keitaro. pic.twitter.com/ICVj4Wlliz

tldr; he knowingly invited a minor to a party, he knowingly got that 16 year old girl drunk, he knowingly accepted her advances…full admittance of statutory rape. https://t.co/JPYnMGbsAe