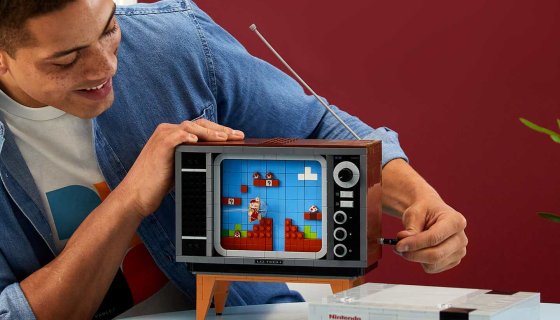 Yup, adults still play with , and this latest kit is precisely why.

LEGO announced Tuesday (Jul.14) that it will be continuing its partnership with Nintendo. Following the release of its Super Mario starter sets, the iconic company known for its plastic building blocks revealed a Nintendo Entertainment System building kit for adults is on the way.

The kit mimics the gaming console and is comprised of a whopping  2,646-piece set. It will allow you to build a functional console, wired controller, . cartridge, and a retro television set. The once fully constructed the console even opens, allowing you to insert the game cartridges and secure it inside just like the real thing.

Bring the pixels to life with the #LEGO Nintendo Entertainment System set! Assemble your own console and retro TV, then turn the crank to make 8-bit Mario move across the screen! Add your LEGO Mario figure for even more fun!

The TV set features a flat 8-bit model of Mario in the game’s opening level, which can be operated by using the lever on the side of the retro television set.

A real cool feature shown in the announcement trailer is you can bring the set to life with sound by docking the LEGO Mario figure from the Super Mario starter course with retro TV.  A very cool touch indeed.

As expected, the set will set you back some coins costing $230. But if you’re in video games, LEGO, and are a serious collector of all things cool, this set is totally worth it. The LEGO Nintendo Entertainment System drops August 1, and we’re sure it will probably sell out rather quickly. You can learn more about it by watching the video below.