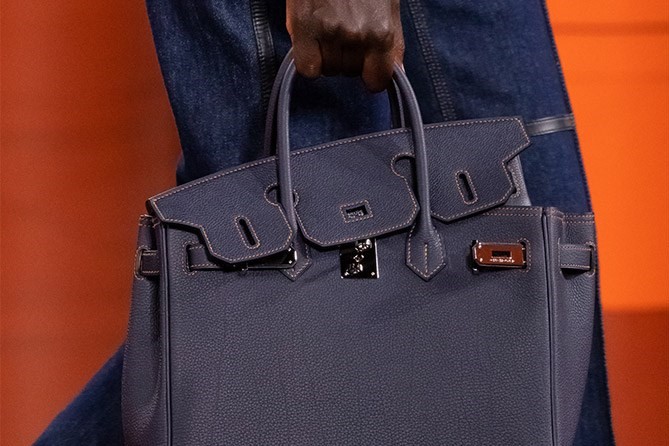 A terrible year for humanity, but a great year for mushrooms. Not only are they being foraged by droves of TikTok’s cottage-corers, they’re the flavour of fashionable insta-interiors, and they’re almost definitely the buzzy new miracle ingredient in your skincare. Now, the future of fashion also seems to be at the spongy behest of the shroom.

Yesterday, Hermès announced that its “Victoria” travel bag will be remodeled in a mushroom-based leather substitute. The luxury maison has got together with MycoWorks, a San Francisco-based startup, which has found a way to turn a “network of threads from the root structure of mushrooms – into a material that imitates the properties of leather.” It comes as many designer labels, Hermès included, look to respond to an increasingly ethically minded and sustainability focused consumer.

Of course, one of the biggest scams of the sustainable fashion movement has been in the rebranding of pleather as a vegan leather. And while it’s not technically a lie – no animals die for pleather – it’s far from an ethical alternative. It’s still made from fossil fuels, still toxic, and still non-biodegradable plastic junk. A pleather bag will never go away, it will simply break down into minuscule microplastic particles until it’s ingested by some helpless organism.

To combat this, imitations have otherwise come in the form of apple, and pineapple leather, which honestly both sound delicious, like something you might fork out for at Whole Foods. Regardless, these alternative techniques are not entirely newfangled within fashion. Brands like Stella McCartney, Gucci, and GmbH have all been testing out leather substitutes to varying degrees of success. What’s striking here though, is that Hermès is a house bound by heritage and tradition, which runs alongside an elite history of craftsmanship. Could these values be grown in a lab?

A partnership with MycoWorks will not replace the brand’s use of classic materials (Hermès will continue to sell crocodile birkin bags) but it will provide a new arm to its offering. And this could be the result of lobbying from PETA, who bought shares in Hermès in 2016 so that it could protest the use of animal skins at annual meetings. “It took five years of protests, stockholder action, and heated pre-pandemic meetings… but it’s proved that it can modernise when its leaders put their minds to the task,” says PETA Senior Vice President Dan Mathews. To celebrate, PETA has sent the luxury house a big vegan choccie bottle of champagne (really).

The new “Victoria” bag will be available towards the end of 2022. In the meantime, revisit last week’s AW21 collection from Hermès and other stand-outs from Paris fashion week in the gallery above.