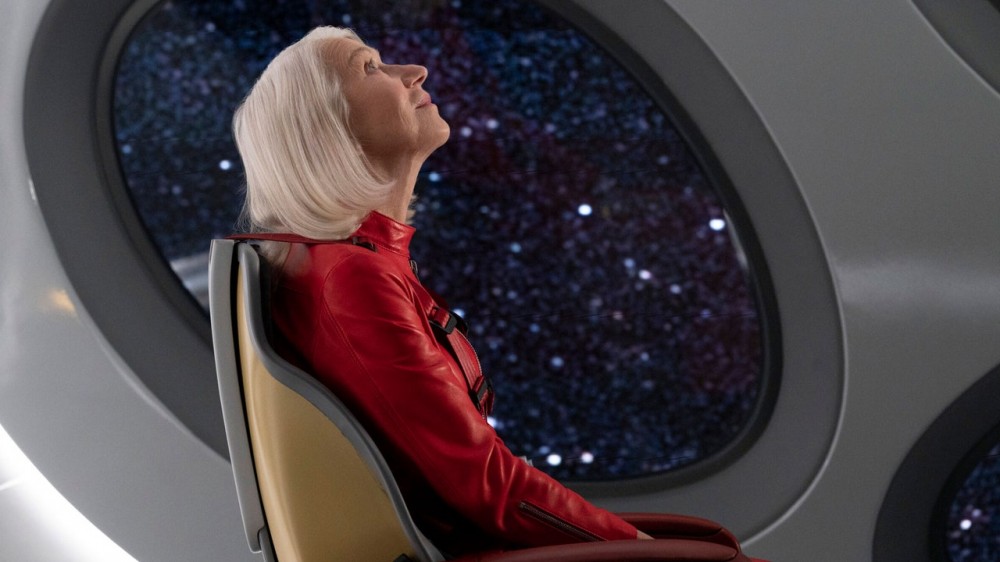 Solos, Amazon’s newly launched sci-fi series, is unlike anything else on the small screen. Creator David Weil’s vision of the future unfolds via episodes that focus and feature a single performer. Familiar faces like Helen Mirren, Morgan Freeman, Anne Hathaway, Anthony Mackie, and Constance Wu monologue through stylized sequences that combine to form an overarching narrative. While we’re used to seeing actors command the stage by themselves on Broadway, most television shows and films rely on a cast of characters. This stripped-down version of storytelling offers a new level of intimacy for audiences, but it’s just as exciting for the performers. “Anything that shakes up the format is interesting, isn’t it?” shared Mirren via Zoom. “At first, I thought, oh, it’s a monologue, it’s just too much work. I don’t know if I’ll be good enough, but then I read the script, and I thought, this is such a beautiful piece of writing. There’s such sensibility and understanding of a certain sort of woman, one who is very recognizable.”

It’s hard to imagine an acting scenario where Mirren wouldn’t be up to snuff. As one of cinema’s most versatile stars, she’s played everyone from Catherine the Great to a trained assassin with skill. Still, her Solo character, Peg, feels like a departure. Self-doubting and shy, she’s spent her life apologizing for existing, but when an opportunity to see the galaxy comes around, Peg decides to take a chance. Surprisingly, Mirren saw a bit of herself in the role. “When I read it, I thought, this is my apologetic, British side, and it drives my husband crazy because he’s American and doesn’t understand it at all,” she says. “I identified with Peg. That part of me is why I became an actor. Many actors are extremely shy people who can’t deal with the real world, but the way they [manage] is through performance. It gives them a portal through which they can engage.”

Because the show was shot on location in California during the pandemic, even filming required an outside-the-box approach. The team worked under strict COVID-19 protocols to keep things safe, and the extra layer of security helped capture the loneliness of traveling solo through space. “I was absolutely isolated, on a set but [working] in a little pod,” explains Mirren. “We had no contact whatsoever. The only people who were allowed to come close to me were costume and makeup. And they had to be all covered in hazmat, suited up and everything. So they were like creatures from space! It was helpful, for the role, much more than l if I could have just wandered off, headed to craft services and chatted with the cameraman.”

Peg’s costume informed Mirren’s performance too. Instead of heading to the stars in a standard-issue flight suit, costume designer Shiona Turini worked with the house of Dior to create a one-of-a-kind red leather look. Mirren has worn the brand to countless big events—her epic crimson Dior Haute Couture gown at the 2020 Golden Globes remains a high note—but her costume felt special. “It was absolutely beautiful and oh so comfortable,” she says. “It’s wonderful for Peg because she’s on this big adventure. She’s never worn anything like that before in her life, but it’s perfect [and] a gorgeous statement.”

Giving the audience only one person to focus on for an entire episode means everything that surrounds the character must be visually stimulating, so costume took on added importance. For Turini, that meant working one-on-one with the actors and Weil to make each look special and in line with the sci-fi theme. Rather than the traditional sci-fi reference points, Weil, who Turuni describes as her “creative soulmate,” had a vision of the future informed by contemporary art. “He said [the future] felt like being in the middle of a James Turrell art piece,” says Turini, who had visited Turrell’s immersive installation at Miami’s Superblue art center. “So much of my work is based just on color. I don’t work with print unless I have to. So, at that moment, I knew exactly what he meant.”

Turrell’s use of light and hypnotic hues that can fill entire galleries led Turini to assign specific color palettes to each episode and keep her mood boards laser-focused. Peg’s crimson connected with her moment of bold self-discovery. “She was very quiet and meek, and I wanted something that felt out of character for her,” says Turini. “A line in the script that stood out to me was, ‘if my dentist could see me now.’ That played over and over in my mind because it was a little bit sad to me. And so I was thinking, what would make someone think that [it would be] something bold and bright, almost playful. She is a little playful once you get to know her—I kept thinking about the woman she could have been if someone just pulled her out of her shell.”

The leather Dior look was inspired in part by a story from Mirren’s early days as an actress. In honor of her first trip to Hawaii (and first time on a plane), the star bought herself a vintage leather suit, which she wore in Hawaii’s sweltering heat. “It was just a hilarious story,” says Turini. “I was like, OK, leather one-piece, that’s where we are going with this!” Working with the Dior team to bring it all to life was fun too. “It was such a beautiful and intimate experience,” says Turini. “We got to go back and forth with different sketches, explore dresses, and think about what would this character wear in space? Is it something from her closet? Was it something that the company made and sent to her? We even wrote a line in the script to help support the route that we decided to take. So that felt very much like a team effort. It was a wonderfully collaborative process every episode; I always wanted to push it and make the clothing a character in itself.”

With the series streaming on Amazon today, the whole world now gets to see the results of that collaboration. The development of Solos was unique for its cast and crew, and it arrives at a time when stories about our shared future feel especially resonant. For Mirren, the story it tells speaks to where we are now. “We’ve gone through this extraordinary, strange human experience. I’m grateful because it has been so different and thrown up so many questions about imagination, kindness, and creativity,” she says. “When Peg signs up, it was very clearly stated there is no way back [and] the thing about life is we are all on a one-way journey. We are all going forward into that unknown.”