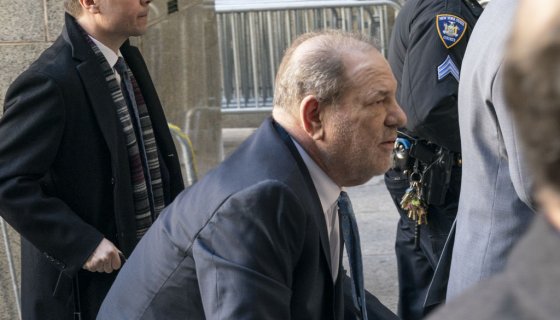 Victims of are finally seeing justice after a jury convicted the disgraced film mogul on charges of rape and ual assault.

According to the New York Times, on Monday (Feb. 24) after being accused by , , 67, was ordered to go directly to jail and faces a sentence of five to 25 years on the first count. Weinstein was acquitted on the two most serious charges against him of predatory ual assault, but was convicted on the lesser charge of ual assault and rape in the third degree which carries a minimum sentence of two years and a maximum of five years.

The charge is defined in the New York state penal code as having “ual intercourse with another person who is incapable of consent” — either because they are too young to consent or for another reason.

The long-awaited verdict drew a strong reaction from a number of celebrities, including former Rent star Anthony Rapp, who wrote, “I applaud the women who bravely stepped forward to help forever alter the conversation around what they — and all of us — have to put up with.” Also weighing in was actress and activist Ashley Judd, who added, “for the women who testified in this case, and walked through traumatic hell, you did a public service to girls and women everywhere, thank you.”

I applaud the women who bravely stepped forward to help forever alter the conversation around what they — and all of us — have to put up with. Gratified to see some justice being served here. #MeToo https://t.co/wR4f66uecj

For the women who testified in this case, and walked through traumatic hell, you did a public service to girls and women everywhere, thank you.#ConvictWeinstein #Guilty

Weinstein was remanded into custody against the protests of his lawyers, who cited his health. He looked ashen and unstable as he was surrounded by court officers who helped escort him out of the court room.

Speaking after the verdict, Weinstein’s top lawyer Donna Rotunno told reporters it was a “bittersweet day” and that Weinstein’s team will “absolutely be appealing” the verdict.
“We are disappointed. We knew we came in and we were down 35-0 on the day that we started this trial,” Rotunno said. “The jurors came in knowing everything they could know about this case. We couldn’t find a juror who had never heard of Harvey Weinstein. The fight is not over.”

The verdict serves somewhat as a triumphant end to a lengthy, highly charged and emotional trial that began on Jan. 6 and included the testimony of six women who said — under oath — that Weinstein had ually assaulted them over the last three decades.

, who is currently facing five to 25 years for the criminal ual assault conviction and 18 months to four years for the third-degree rape conviction, is scheduled to be sentenced on March 11 before heading to Los Angeles County to face additional charges.