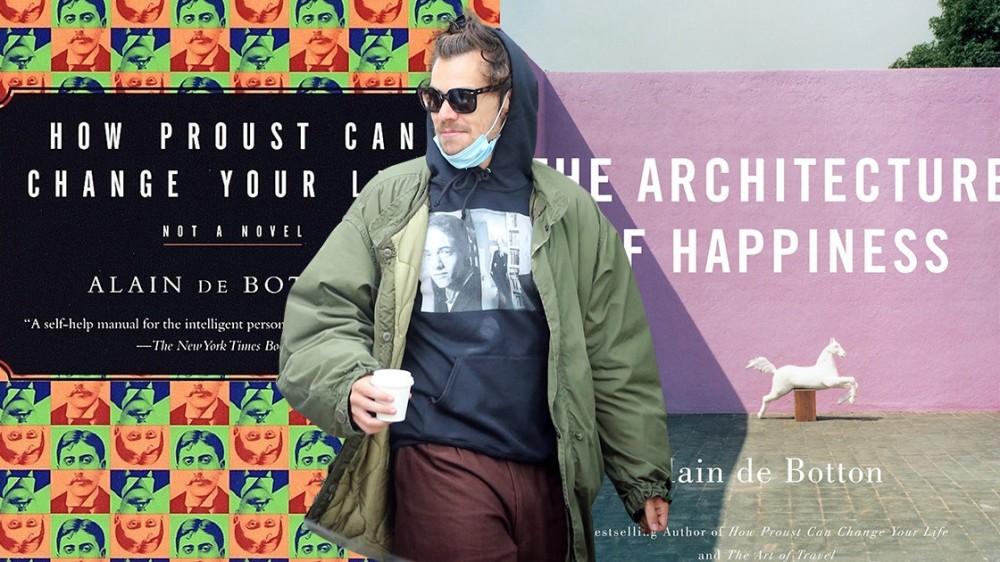 Harry Styles is a man smitten with fashion. He appreciates the architecture of a Saturday Night Fever–flare and is well-versed in the loveliness of a pearl necklace. So when Styles turned up to meet Hamish Bowles—his interviewer for his first Vogue cover story—wearing a sweatshirt, it can only be assumed he was making a fashion statement.

The hoodie featured the likeness of Mr. Alain de Botton, a Swiss-born, London-based intellectual who’s published dozens of books on the benefits of reading Proust and the fulfillment to be found in the finer arts. The garment is one of a kind, because, as Styles tells Bowles, he designed it himself. Styles pulled two photos of de Botton—one of him with crossed arms, leaning up against a bookcase; another sees a more youthful de Botton (the author lost his hair at 20)—and printed them side-by-side in black-and-white on a black cotton hoodie. It goes without saying, the singer’s adulation of the author runs deep.

It all started in 2013 with a story in the U.K.’s Metro. A Q&A in which the author asked de Botton if he was friends with Styles. “That would be over-egging it. I was introduced to him at a party. Neither of us had heard of each other. We had a nice chat. It was fun.” De Botton even tweeted a photo of the encounter.

The interview continues with de Botton—a dedicated aesthete with less pomp than Oscar Wilde and an educator whose credos are a lot more polarizing than Bill Nye the Science Guy—expounding on how to engage the public.

“My plan is to…get people such as Harry Styles to go on television and recommend to everyone they read Proust and Hegel,” he said in the 2013 interview. “David Beckham could do Aristotle and Plato. The cause of intellectual life in this country would be helped immeasurably.… In an ideal world Harry Styles would be teaching his 10 million Twitter followers a little more about Greek philosophy.”

That same day, the then One Direction bandmate complied. He took to his Twitter account, publishing to his millions: “Socrates, born in Athens in the 5th century BCE, marks a watershed in Ancient Greek philosophy.” Styles didn’t cite de Botton in the tweet, which was a sentence pulled directly from Wikipedia.

Styles has come a long way from copy-and-pasting from Wikipedia’s Ancient Greek philosophy page. He’s read several of de Botton’s books, listened to his podcast, The True Hard Work of Love and Relationships, and attended his workshops. “I love his writing,” Styles told Bowles. “I just think he’s brilliant. I saw him give a talk about the keys to happiness, and how one of the keys is living among friends, and how real friendship stems from being vulnerable with someone.”

After reading de Botton’s The Course of Love, Styles said he fully appreciated the work required in cultivating and sustaining a romantic bond. “When it comes to relationships, you just expect yourself to be good at it…[but] being in a real relationship with someone is a skill,” he shares in his cover story. The singer would go so far as to gift Bowles with a copy of The Architecture of Happiness—a lovely read on the influence a physical space can have on the spirit.

Born in 1969, de Botton grew up in Switzerland. His father’s hyper-successful career in banking affording him a comfortable childhood, although de Botton has characterized it as a lonely one spent in a series of boarding schools. He would go on to collect various degrees from Cambridge, King’s College, but he stopped short on his Ph.D. at Harvard to pursue his career in writing. His first book, the novel, Essays on Love, catapulted him into the public eye, where he has remained since. He’s gone on to become a sage for modern life, preaching the application of philosophy to the everyman and woman. His work bears titles that are hard to resist: Why You Will Marry the Wrong Person, How Proust Can Change Your Life. And in those works, he offers a switch readers can access to flick on the lightbulbs in their heads.

To his legion of followers, de Botton’s writings produce rewarding realizations. To his detractors, the philosopher over-simplifies, spoon-feeding his readers with the references required to frame their point of view. To that, de Botton says never mind. “I always feel that I am writing for somebody who is bright but impatient,” he says in another interview. “Someone who doesn’t have unlimited time. That is my sense of the reader. So I have got to get to the point.” Styles, a busy guy? Sounds about right.