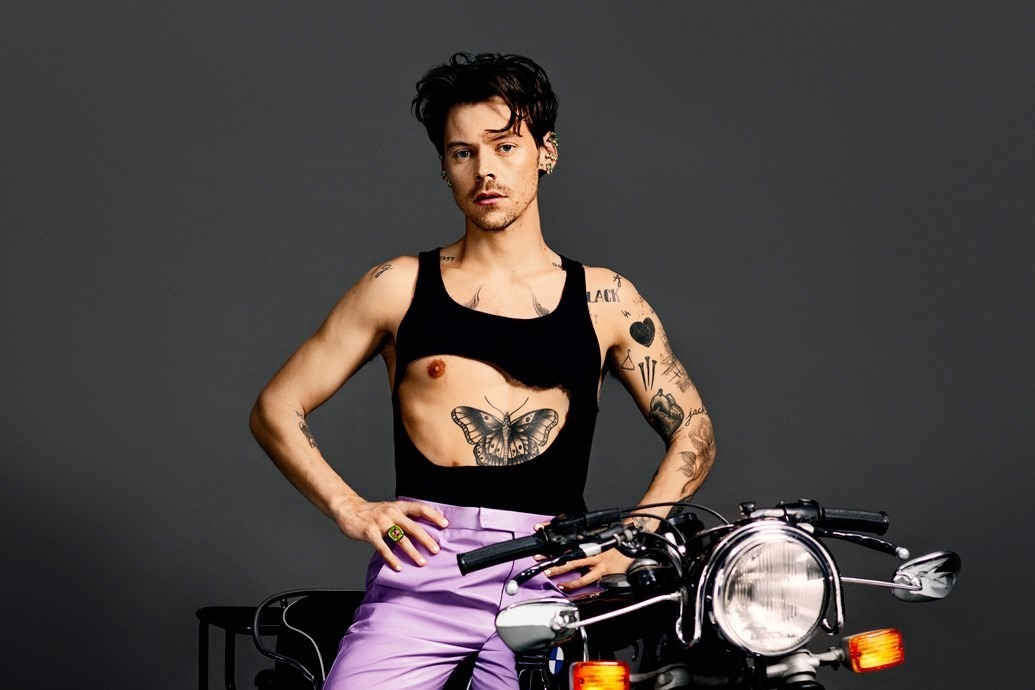 The biggest hook-up since Larry

Dubbed HA HA HA, the link-up mines fashion’s timeworn tradition of berserk mash-up titles, as both an acronym for Harry and Alessandro and the words version of the laugh-cry emoji – which is apparently how the duo have ended their messages for years. In an accompanying press release, Michele explained the genesis of the project: “The idea of working together came to me one day while we were talking on the phone, I proposed creating a ‘dream wardrobe‘ with him, starting from those small oddities that come together in childlike visions. We ended up with a mix of aesthetics from 1970s pop and bohemian to the revision of the image of the gentleman in an overturned memory of men’s tailoring.”

As the designer says, this translates to “sartorial suits, treated denim jackets, and velvet suits in irregular hues, unexpected printed pyjamas and bowling shirts, lined coats with hoods and frog fasteners, and pleated kilts with leather regulating straps.” Perhaps the apex of any muse-master relationship today, throughout his solo career, Styles’ most recognisable looks have all come via the Gucci atelier – there was the Vogue saloon dress, the feather boa, and the Dorothy costume he wore to his 2021 “Harryween” concert – not to mention all the advertising campaigns, that Met Gala appearance, and the hand-scribbled Fine Line merch.

With their Pleasing nails, pearl necklaces, sweater vests, and kitsch-collared shirts, it’s easy to spot a Harry Styles fan taking comfort in the musician’s more bookish looks, and yet despite all the twee, Styles’ approach to dress has often engendered debate, the work of Michele and stylist Harry Lambert presenting more of a challenge to form than any of Styles’ actual music. “Harry has an incredible sense of fashion. Observing his ability to combine items of clothing in a way that is out of the ordinary compared to the required standards of taste and common sense and the homogenisation of appearance, I came to understand that the styling of a look is a generator of differences and of powers, as are his reactions to the designs I have created for him, which he has always made his own; these reactions restore me with a rush of freedom every time,“ Michele added.

While retail details on the collection remain scant, there’s probably no point in talking release dates and pop-up locations because everything will sell out long before the opportunity arises!