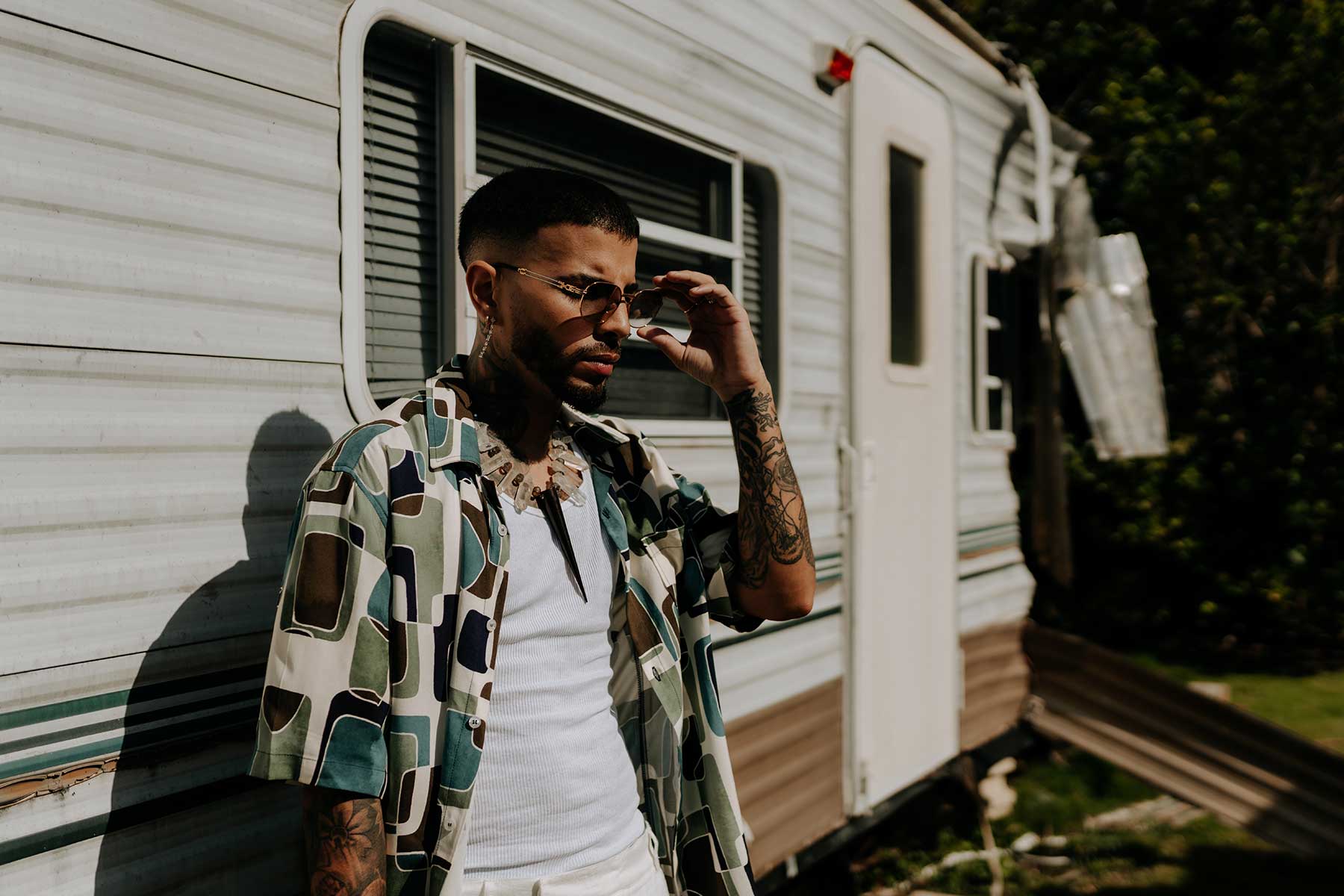 This piece is part of Nuevo Culture’s second annual Grammy Preview special issue, released ahead of the start of first-round voting. We spoke to some of the year’s biggest artists about the albums and singles that could earn them a nomination — or even a statue come January — delved into the challenges facing the Recording Academy, and more, providing a 360-degree view of what to watch for in the lead-up to the 2022 awards.

This past April, Rauw Alejandro had just about finished his second album, Vice Versa, but he had a nagging feeling that something was missing. “I kept thinking it needed one more song,” the Puerto Rican rapper-singer recalls. “It needed a single, something to be that marker to kick it all off.” He and his frequent collaborator Mr. NaisGai tinkered with pop melodies and played with spangled Eighties synths until they came up with “Todo de Ti,” the sun-bright, disco-tinged hit that was ubiquitous all summer — and that’s launched Rauw into new levels of mainstream attention.

Grammy Contenders 2022: Dave Grohl on Returning to the Stage and Why Covering the Bee Gees Is the Foos' Peak So Far

Will the 2022 Grammys Finally Be for the People?

The track also serves as a bold introduction to the eclectic sounds Rauw collected on Vice Versa, which riffs on Afrobeats, Brazilian funk, and R&B without losing the essence of reggaeton. “This album is varied, and it shows that I’m not afraid to experiment, and that’s what makes it so special to me,” Rauw says.

Now, Rauw is showing people what the experience of such a vibrant set of songs looks like live. He’s currently on a tour that includes four sold-out dates at Puerto Rico’s historic venue El Coliseo this week. (It’s his first show there with an audience; last year, he recorded and livestreamed a performance called Concierto Virtual en Tiempos de COVID-19 Desde el Coliseo de Puerto Rico.) During a call just before a stop in Houston, Rauw spoke about the success he’s had, why he wants to keep experimenting with music, and what he wants to accomplish next.

You released your studio debut, Afrodisíaco, in November 2020, and Vice Versa came less than a year later. What different sides of you do those albums represent?
Vice Versa was a totally different album from my debut, Afrodisíaco. Afrodisíaco was inspired by reggaeton from 2003, 2004 — that golden era of reggaeton, with albums like [Wisin y Yandel’s] Pa’l Mundo, [Daddy Yankee’s] Barrio Fino, [the Luny Tunes compilation] Mas Flow. It was about exploring my roots, but you could hear certain experimental details on Afrodisíaco, like little hints of what was coming and what might happen on the next project. So, when we did the new album, we decided to take it totally vice versa, like the title says. … To do that, we had to tap into a huge variety of sounds. There’s a lot of dancehall, tons of electronic music, my first time making a drum-and-bass track, house music, and a funk brasileiro. We have trap, some Afrobeats, and even R&B, with a bolero-style song. It’s an album that’s rich in sounds.

You’ve always experimented with different styles, but “Todo de Ti” goes in a completely new, Eighties-inspired direction. How did you land on that approach?
I was listening to a lot of music on that wave with synths and lots of electronic production. I have a lot of playlists that I listen to when I want to get inspired, and I’m a huge fan of Bruno Mars. One of my favorite songs is “Locked Out of Heaven,” with that mix of rock and funk that still has that great essence of live instrumentation. There’s another group I was listening to around that time called Dayglow and a couple of other artists that were on that vibe. I pushed for the live guitars, the live bass, all of that, to give it a little more of a throwback Eighties and Nineties sound. And that was that.

You did more production work on Vice Versa than past projects. How did that impact the sounds on the album?
I’ve always led all my projects. I’ve picked the producers and the composers I want to work with, and I have a pretty small, close circle. The main people on this are the same people who worked on Afrodisíaco. In this case, though, I worked with a new producer, Charlie Handsome, from the U.S. He’s worked with Post Malone and some American artists I like. But, yeah, there’s also some guy called El Zorro. He’s a mystery. When people see El Zorro in the production credits, they’re like “Who is that? Who’s this producer?” Well, it’s some guy named Rauw Alejandro, I don’t know if you have heard of him [laughs].

So it is you! How has working as a producer changed your creative approach to your music?
It’s changed a lot because I’m an artist who wants to keep growing, who wants to keep learning. But it also has to do with life experience. On Afrodisíaco, I learned a lot from my mistakes and kept a lot of notes and applied those to Vice Versa. Now, after Vice Versa, I have new lessons for my next album, so everything I do informs the next thing. Before, I didn’t know how to go in with Pro Tools or Ableton. The advantage of knowing that stuff is that you can lay down an idea or a demo and take it to someone who can bring it to the next level. My goal is to one day be able to produce well enough that I can finish a track and do the full production myself from beginning to end. That’s a dream right now.

You were nominated in the Best New Artist category at the Latin Grammys last November. What would it mean to you to be recognized at the Grammys for Vice Versa?
That would be a dream for me. The American Grammys, the Latin Grammys, it doesn’t matter. To me, they’re all the awards that I’ve dreamed about since I was a little kid, and any chance to represent Puerto Rico and a new genre would be an honor.… The fans like what we’re doing, so maybe the Academy will like it, too [laughs]. We’ll see if we pass the test.

“The American Grammys, the Latin Grammys, it doesn’t matter. To me, they’re all the awards that I’ve dreamed about since I was a little kid.”

What do you think Vice Versa shows the Academy and the rest of the world about where artists can take reggaeton?
I think there are no limits in music, and today the Latin music industry is growing at a global level.… I want to keep showing people that you can be creative, you don’t have to limit yourself, and you can make music that comes from the heart without fear. Vice Versa was like that: It’s a project that I think opens new doors to younger artists and shows them that they can be experimental and that Latinos don’t just have to make reggaeton — there are countless genres, and Latinos can be recognized for those globally.

How has the success of “Todo de Ti” changed your ambitions? Does it make you want to move into more of a pop direction?
My career has evolved each year from the year before. Every year, it gets bigger, and to me, there’s no peak. There are people that say, “Wow, you’re at your peak right now!” But I don’t want a peak. Next year, I want to keep being innovative. “Todo de Ti” was a huge moment in my career, but there are a few more styles left to try out, believe it or not [laughs]. To me, that’s the most fun part, the experimenting. So I’m working on a lot of projects right now. I’m working on an EP called Trapcake; I released the first part a long time ago [in 2019] and now I’m going to come out with Trapcake, Vol. 2 because the fans are asking for it. After that, I want to work on my third album, so we’re already starting to organize a few ideas while I’m on tour.

I think more than trying one direction or another, there’s always going to be a different Rauw on each project. … My essence is never going to change; it’ll always be rooted in R&B and reggaeton, but there are always going to be a lot of fusions and experiments. I let myself get taken away by the vibe and the moment. It’s all about what mood you’re in. Sometimes I feel more street, I feel more romantic, whatever it is. But I think that’s the exciting part of making music — it’s the magic that comes when you’re in the moment and you surprise yourself and do something spontaneous.