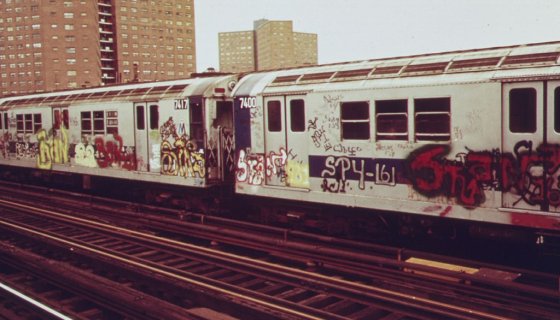 While lots of negative aspects of American life are making comebacks in this Trumpian era (i.e. ), a few other practices from yesteryear are also once again finding their way into modern life and we ain’t mad at those.

Graffiti artists are once again taking to the train yards of New York City to bomb public transit with their art, skills, and even social-political messages, and we ain’t mad at it one bit. According to The Gothamist, up to 20 train cars in Jamaica, Queens were blessed with all kinds of art and designs with two whole trains completely draped and one train bearing a message that read “Don’t come here.” A memo to possible gentrifiers?

20 Jamaica train cars hit with graffiti over the weekend according to Joe Campbell. The truth is if graffiti artists have the time to do all this work, then there’s more than enough time to sabotage the system or equipment in other ways. This @MTA @NYCTSubway system isn’t safe. pic.twitter.com/WXVHVrLXy5

We actually don’t mind riding in a train with the “candy paint” but that’s just decades of Hip-Hop living talking.

Still though this recent weekend saw the MTA sporting some new look train cars, MTA Chief Safety Officer Patrick Warren says the practice isn’t as bad as you might think.

“The facts are that major graffiti incidents systemwide were down in 2019 despite alarmist claims to the contrary,” said MTA Chief Safety Officer Patrick Warren in a statement Monday. “We have zero tolerance for these incidents, which take passenger trains out of service and take away valuable resources and thousands of dollars from critical system improvements. New York City Transit continues to work closely with the NYPD to hold those accountable for these incidents to the fullest extent of the law as the safety of our customers and employees is our top priority.”

Interestingly enough the NYPD oversees security on the tracks and use everything from infrared glasses to flashlights (joke) to keep graffiti artists from giving train cars complete makeovers like this. That being said we can only come to the conclusion that these graffiti bombers are indeed ninjas. Probably samurai’s who’ve studied ways to get around the NYPD’s sophisticated equipment of infrared technology and flashlights (again, joke!).

Why this would make anyone feel “unsafe” is beyond us but to each his own. As long as the trains runs smoothly and can get us from point A to point B on time we could care less what they look like on the outside, but we do appreciate some good ol’ spray can art. Just sayin.’