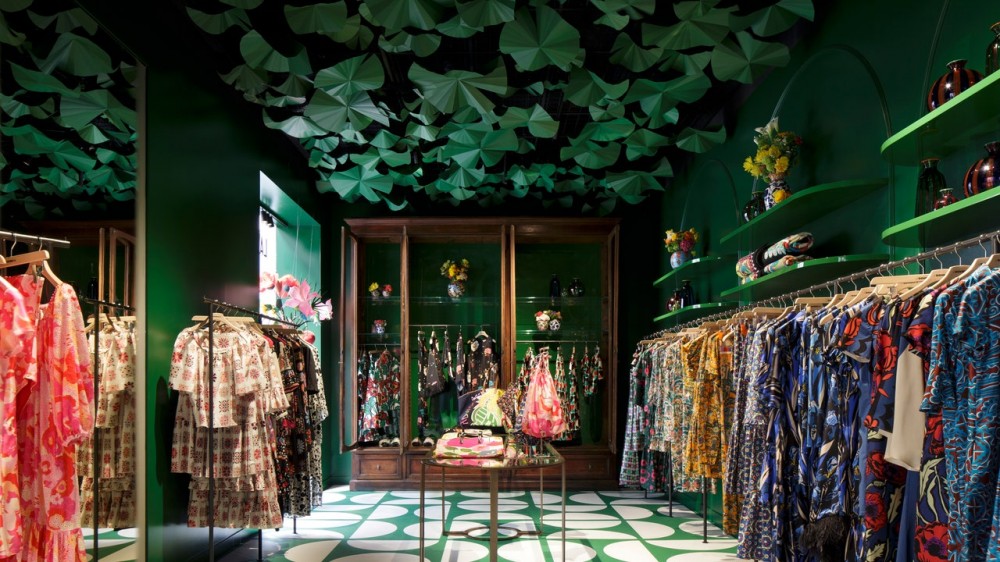 It takes guts and ingenuity to open a store during the pandemic, but these are qualities that JJ Martin, an American designer building a business in Italy, has in abundant supply. If she could alchemically transform her characteristics into a perfume or an essential oil, she’d sell plenty of it in her vibrant new Milan shop, a sort of joyful Pandora’s Box where her La Double J dresses, accessories, and homewares are on offer in all their feisty splendor.

Located in Via Sant’Andrea, one of the most sought-after and expensive streets in the Quadrilatero della Moda, Martin’s La Double J space doesn’t conform to Milan’s luxury retail scene, where an abundance of chrome, marble, and sleek polished surfaces makes stores look like cookie-cutter mausoleums. In contrast, Martin’s boutique is eye-catching and impactful. With its “vibration-rising” interiors, mannequins in mudra pose with bouquets of flowers, pomegranates, and parrots sprouting from their heads, and windows emblazoned with mantras like “Ready to Resurrect” and “Holy Mother of Pasta,” everything looks and feels witty and spirited.

On a rainy afternoon, I was given an entertaining tour by the new shopkeeper, whose ebullience aligns with the boutique’s mood-lifting properties. Martin’s spiritual practice has deeply influenced her retail vision, making it rather unique. As far as I know, no other store in the world boasts a Sacred Grotta. A sort of sanctuary nestled in the shop’s basement, it’s where Martin introduced me to her Pantheon of Goddesses and tutored me in the multiple spiritual qualities of crickets and bats.

Tiziana Cardini: Since launching La DoubleJ in 2015, you’ve come a long way, accomplishing lots in a short span of time. This store is certainly a big achievement. How did you get it done?

JJ Martin: Scary. Rocky. But so thrilling. I went in completely blind, I’m certainly not a retail expert and my team is really young. In August 2020, in the midst of the pandemic, my ex-husband Andrea Ciccoli [CEO of The Level Group, a company which partners with luxury brands on e-commerce operations] came to me and said: ‘Listen JJ, now is the right time to open a store.’ And I said, ‘You’re nuts!’ That just feels like a lot of work! We have so much going on already and we’re understaffed and don’t have enough money. How are we going to do it? But Andrea is a visionary and he really saw the potential. He had to be trusted.

He found this great location, which was a former shoe label’s store designed by Zaha Hadid; it was sculptural and highly futuristic and completely blocked energetically. We tore everything down and opened up the space—I just went with my stomach and my guts as I usually do and reached out to creative people to help me with the project. I would’ve never commissioned a star architect to do it. It’s like making a soup with just one ingredient, how sad is that? It’s not Italian!

Everything I’ve done and accomplished at LaDoubleJ so far has been on a collaborative basis. So the Milanese firm Paolo Badesco oversaw the store’s interiors and found the vintage furniture pieces I’m fond of. As I spend a lot of time in Bali, I wanted to recreate a jungle feel, so I had the walls of the main floor painted in a bright emerald green; the flooring was also hand-painted by Italian artisans in shades of white and green recreating a vintage LaDoubleJ geometric print. On the ceiling, Milan-based artist Joann Tan handcrafted giant stone-paper lotus leaves hung upside down; she also created the wooden mannequins in the windows. They’re in mudra pose—I asked her to make them stand in yoga tree pose but it was too complicated!

The store feels and looks like a self-portrait, like an extension of your home. It’s a merging of the mundane and the spiritual: Upstairs you have lots of commerce going on—all the RTW, the accessories, and the home collection—and downstairs there’s what you’ve called the Sacred Grotta…

Yes! Down here is where I want the magic to happen. I had the walls covered in beautiful murals, painted by a young Romanian artist Aitch. I found her on Instagram. The first drawings I saw of hers were of witches and enchanted forests and were so captivating to me. I wrote her a long letter about my spiritual practice, my vision for the well-being of women. I spoke about transformation, resurgence, rebirth, the whole thing, and she said, ‘OMG you’re crazy! That’s great! Let’s do it!’

So the murals depicting feminine Goddesses were created around her drawings?

Yes. It’s a full-blown celebration of divine feminine energy. In this time of patriarchal values being so over-flexed across cultures—as we cut down forests, as we make more money, as we squish people, as we run run run, do do do, build build build—there’s a real moment now where the feminine is coming back. And those values—the real openness, receptivity, the insightfulness, the intuition, basing your decisions on emotions and not on the logical number-crunching mind—the effort of putting feminine energy at the center of my professional and personal relationships, of my spiritual practice, is the never ending theme of my life. I need to trust it and to share it with other women. I wanted this store to be a shrine to the feminine energy. So I gave Aitch a brief where I talked about archangels, goddesses, high priestesses, all of which symbolize the Divine Mother, the sacred feminine in their different forms: Archangel Haniel, Archangel Ariel, Isis, Kali, Quan Yin, and Green Tara, the female Buddha. Every one of them represents different facets of femininity. I use them daily in my meditation practice. It’s super powerful stuff, it really works.

This space definitely radiates strong positive vibes; how are you planning to activate it and share its energy?

It’ll be a place of connection and sharing, as I have my network of spiritual teachers and gurus around the world. This room went up and the next day I had a call from my teacher in Bali saying: JJ, I’m in Egypt and I’ll be doing an Isis transmission from the Nile tomorrow, and I was like, ‘Wait, I just built a shrine to Isis in Milan so I’ll be joining you on your Isis transmission and we’ll be blessing the space!’ So the next day I was on my computer getting Isis waves with other 35 women on Zoom, it was hilarious. Tomorrow morning I’ll have my yoni group come here and we’ll be doing a blessing of the space, with candles, crystals, the whole thing.

Our first big event here for the public will be on May 15, we’ll host Sandra Walter, who’s an ascension guide from Sedona, doing a virtual workshop. From Sedona she’ll guide people on their spiritual ascension process, we’ll have a meditative transmission with her via Zoom. It’ll be a session on how to activate your divine DNA. In June I’ll be joining her in Sedona for a weekend retreat where I’ll be one of the guest speakers. This wellness part got activated because the universe takes care of it—I’m not selling it, I’m not making money out of it; I’m literally just trying to get the word out about the goddesses and the feminine energy because I truly believe it’s so important. There’s really so little emphasis in our culture about it. I’m not here just to sell a woman a dress. I’m actually happier if I can get her to start meditating or introduce her to an energy healer. My message is: Ladies, spend more time out of the office and more on the mat.

It sounds like a good message. But I see not just flaming goddesses painted on the murals, but also unicorns, bats, flying lips, breasts, and lots of eyeballs. I’m curious about the meaning of all these arcane allegories.

Mostly they’re mystic symbols. Eyeballs represent the inner sight of our third eye. The animals have strong spiritual power and I’m really big on their spiritual force. Bats are spirit animals, symbols of transformation and spiritual alchemy. The other day, a huge cricket was found in the store, so we looked up at the spiritual significance of crickets and it said they bring good fortune. The same day we had a woman here who bought $11,000 dollars worth of homewares. Crazy, isn’t it?