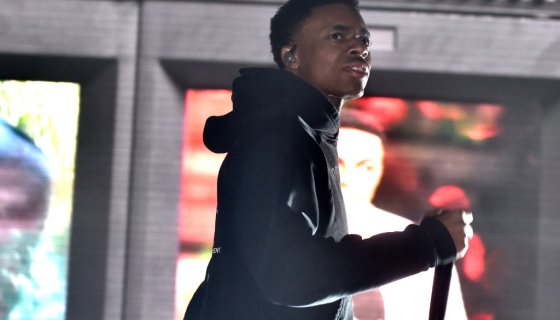 is most likely comfortable in any hood but his folks in Washington, D.C., and its surrounding regions probably are riding with him a little less now. After putting out a t-shirt that reframes hot dogs as a “glizzy,” Twitter has been firing back at the Long Beach, Calif. rapper with Staples responding with his usual dry wit.

Glizzy Gate began on June 28 when Staples tweeted, “Neither Joe Biden nor Trump are trustworthy I can tell by how they approach a glizzy.”

For context, at least since 2018 or 2019, there has been persistent chatter that some folks in the Washington Metro region refer to hot dogs as a glizzy while most maintain its D.C. slang for a Glock handgun.

Ever since I learned DC niggas call hot dogs glizzys I can’t get over the fact that a DC rapper really named himself a Shy Hotdog https://t.co/Som2SOiRuV

Staples continue his glizzy tutorial by putting together an over the top theory that linked American presidents and their methods of hot dog eating, calling them a secret society.

“You can find imagery of every modern day president eating a glizzy this is NOT a conspiracy it’s a secret society. Don’t take my word for it google JFK with the glick google Nixon with the glick it’s real.”

Staples then shared a photo of President Ronald Reagan cooking hot dogs on the grill writing in the caption, “HERES A PICTURE OF RONALD REGAN GRILLING 28 GLIZZZYS AND HE PUT CRACC IN THE BLACC COMMUNITY BUT YALL NOT GON HEAR ME TILL ITS TOO LATE”

HERES A PICTURE OF RONALD REGAN GRILLING 28 GLIZZZYS AND HE PUT CRACC IN THE BLACC COMMUNITY BUT YALL NOT GON HEAR ME TILL ITS TOO LATE pic.twitter.com/PtMkLTAkeL

That tweet was later followed with Staples writing, “I see a lot of people talking about politics on here but if you want to find the truth about the American government follow the glizzy.”

From there, Staples began quote-retweeting his followers who all chimed in with their own spin on glizzy consumption and that went on for much of the day.

On Friday (July 3), Staples shared the Glizzy Gate shirt fashioned as a presidential campaign shirt with a hot dog in a bun dressed as Uncle Sam and Vince Staples 2020 on emblazoned on the back.

Since the debut of the shirt, the reactions from DMV Twitter have been both intense and comical, allowing themselves to accept it the joke that it is.

Staples also incorporated D.C. slang in a few responses to his critics who say he stole their wave. At one point, Staples mentions the infamous fried fish institution Horace & Dickies, which closed its original and iconic location in the city’s northeast section earlier this year due to gentrification said the owner. However, three other locations are still in existence.

Check out the responses below. To cop the shirt, click here.

That was an election year https://t.co/BgsWJM6ZfF

The information is out there. https://t.co/PbNLHrwd2S

He deep fried the glick. Higher ups knew he was only one foot in. https://t.co/rzoOf2Db3b

Lmfao they called @vincestaples about some Glizzy’s lol he told @JoeBuddenPod holla at us 🤦🏾‍♂️😂😂😂 pic.twitter.com/3kkJjUcvWX

Glizzy originated in the DMV. What’s the nations capital? Wake up.

The truth always comes to light celieve that. Follow the glick. #glizzygate

You yelling over wieners cuh https://t.co/PD3Hu0b97u

Im hand sewing them myself. https://t.co/oKm1nVpROB

Y’all not gon keep disrespecting me on this app https://t.co/Get2pNC8A0

Trust I know cause I go to Horace and Dickies they always got fish I can’t speak for these other niggas. https://t.co/ypoE3EKKQo

Obama made sure they had him on camera with the glizzy. He did what he had to do pic.twitter.com/bDgBbLk0CS

if they ever catch me with a glizzy in my hand pic.twitter.com/kjSMhICmaA