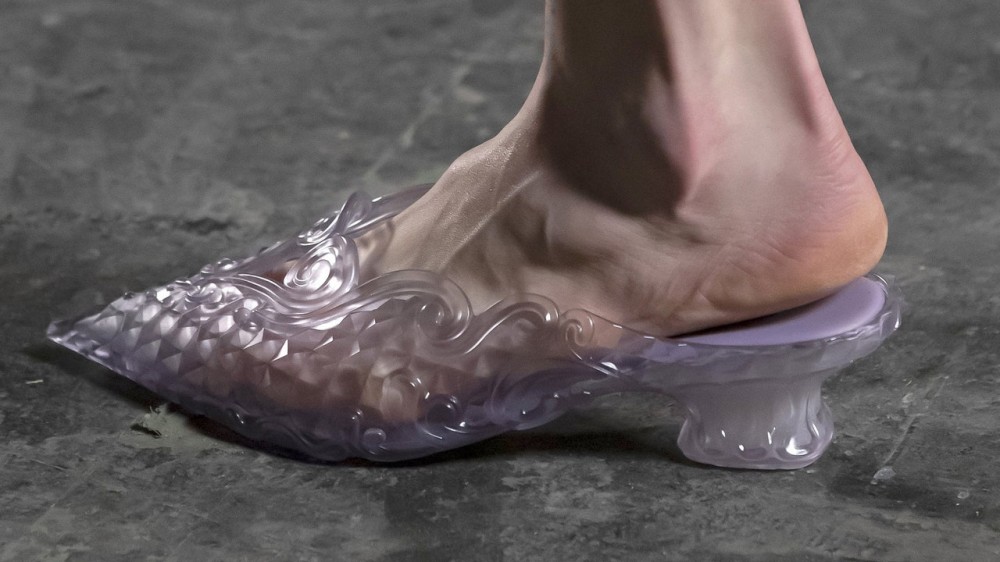 Since the pandemic, I've been obsessed with the idea of pretty footwear. Something that is going to make the foot look chic, fabulous, and even a bit royal. This past week, my wishes were granted when Y/Project showed its Fall 2021 collection. Here, the shoes reminded me of something from a fairytale, maybe a princess frolicking in the woods, or some cosplaying renaissance ball babe. The slides came sculpted with low heels, a three-dimensional diamond pattern on the body, and traced the top of the foot with ionic swirls.

The shoes themselves were a collaboration with Melissa, the vegan and recyclable brand that hails from Brazil with the tagline “the original jellies since 1979.” Melissa has been around since the heyday of jelly shoes. In the ’90s, they made clunky jelly sandals in all the saccharine hues of the rainbow. This incarnation feels a bit more grand, which makes sense. “The Y/Project x Melissa shoe collaboration is a nod to Victorian vases, profusely adorned and embellished, merged with the popular British tradition of porcelain vases shaped as miniature court shoes, distorting the idea of preciosity,” the press release for the collection read. These mules are fashioned from squishy, teeny-bopper fabric but elegantly refined. Yes, two wrongs do make a right!

I’m a woman who loves a blocky, bulbous, weigh-you-down-like-an-anchor ugly shoe. I’ve written about my fair share of chicly warped platform Crocs or UGGs that gobble up the thighs like Jabba the Hut (also by Y/Project!). But lately, I’ve been lusting after dangerously towering stilettos like the spindles of Christian Louboutin Pigalle or the YSL Tribute—the opposite of a Zoom-only look. As for these Y/Project x Melissa princess shoes? They are truly the perfect fit for being indoors. I’m into this idea of adding a fantastical flair to my toes but without the seriousness or literal heft that comes with typically elevated footwear. Approachable, easy, but with a hint of magic, these shoes are like a glass slipper that Cinderella would slip into, except they are jelly.