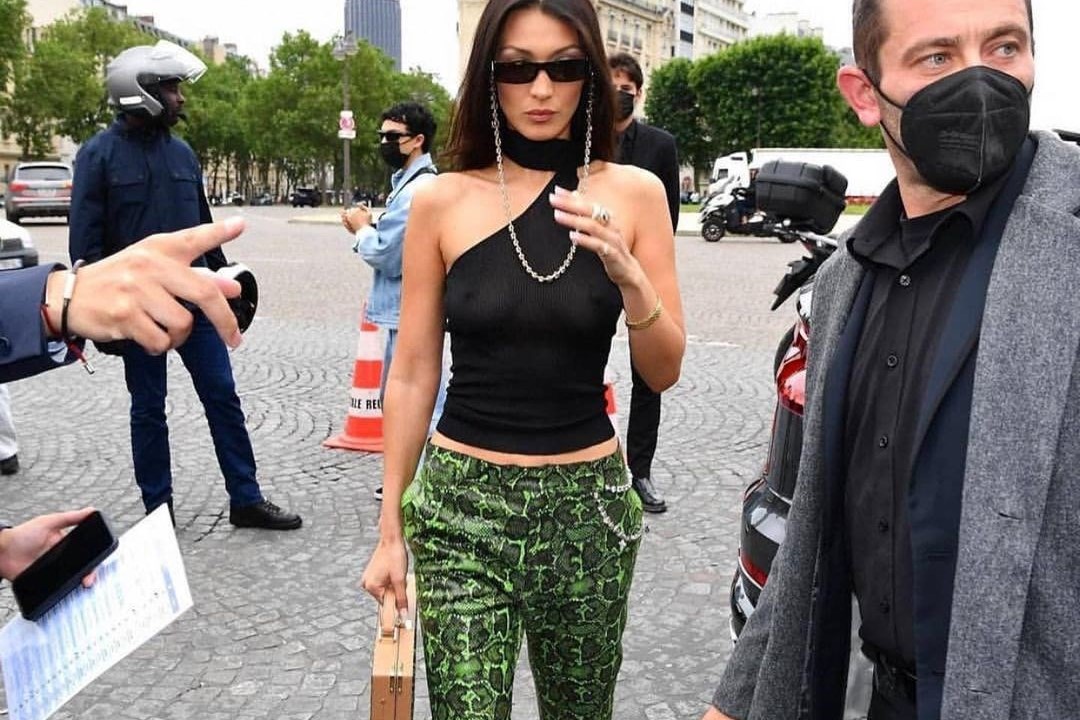 Swinging from the sides of Bella Hadid, Lady Gaga, Olivia Rodrigo, and the SS22 runways, the briefcase is back. And this time, it means business.

By day they would pile into cramped commuter trains. Coffee breath, sturdy trousers, and receding hairlines making up a sludge of indistinguishable city types. By night, they’d return with their heads slumped over briefcases, weighed down by large glasses of bourbon and cigar smoke. Only, this isn’t 1982, nor is it Mad Men, and these archetypes of yore have, thankfully, all but died out. And so too had their briefcases – that is, until now.

In the past fortnight, Bella Hadid, Olivia Rodrigo, Saweetie, and Lady Gaga have all been spotted wielding the office accessory, with Virgil Abloh and Kim Jones showcasing their own iterations during last month’s menswear shows. On TikTok, teens are left mesmerised by the briefcase, creating mini sagas out of their unlocking as if they were explosive time capsules – mostly with completely underwhelming outcomes, of course. Wow! A receipt! And over on Instagram, fashion fans are beginning to introduce the attaché alongside more of a retro-themed, influencer aesthetic.

For the vast majority of people, however, the briefcase is wholly incompatible with modern life. It’s impractical, cumbersome, a relic. Nowadays you’re more likely to see a businessman rooting through the contents of a Jack Wolfskin rucksack than fishing out keys, credit cards, and a laptop from the bottom of a leather trunk. Why, then, do so many people want to explore this as part of their wardrobe today?

And do we even care about where briefcases come from? While they started out in the courtroom, current examples are so absurdly distanced from their stuffy predecessors – crafted from lime snakeskin and shrunken to Polly Pocket proportions – that they have undergone a complete renaissance in form and function. What remains unchanged, though, is that sense of purpose that a briefcase projects, which is surely a reaction against lockdown’s sluggish succumbing to hate-wear.

Today, at least, the briefcase represents dressing with intent – much like Rodrigo’s determined stride, 18 years old and marching into the White House, confidence locked in the clasp of her hands. Below, we unpack three reasons as to why the briefcase’s stock is suddenly, and unexpectedly, on the up.

BLAME IT ON KANYE (KIND OF)

Like so many dubious fashion trends, a culprit can often be found in Kanye West. Back in 2017, the rapper was photographed lugging a Goyard trunk around Paris Fashion Week like an evacuee suddenly beamed into the 21st century. And though the look didn’t immediately catch on, West was accompanied by Virgil Abloh, who, this past month, sent out a slew of briefcases down the Louis Vuitton runway. These pieces were made from buttery cream leathers, iridescent metals, and came blasted with the LV monogram, none of which were office appropriate. That being said, if the codes of formality were ever fading, then the coronavirus has rang the death knell. Not long after Virgil’s offering came Kim Jones’ turn at Dior, who offered up his own line of briefcases, this time cast in slick snakeskins with micro bag, size-down options.

WE ARE ALL GIRLBOSSES NOW!

The briefcase revival does not signal a return to the office. It’s representative of a complete blurring of the boundaries between labour and leisure. After all, we don’t work from home anymore, our work is now located at home. The “hustle” has encroached into the most intimate corners of our life. And, as seen on these female celebrities, the briefcase reflects the way in which capitalism has parlayed into feminism (or vice versa). As such, it is, unfortunately, the only logical zenith of girlboss culture – just with a little more self-awareness and a little more irony.

Unlike the power suit of the 80s, and the entire wardrobe of Miranda Hobbes, however, this is no overture to dressing like men. Where women once employed a strong shoulder and a smart holdall brimming with important-looking paper to assimilate into the patriarchy, we’ve now learnt to lean into our femininity. Take Olivia Rodrigo in her baby pink tweed Chanel suit, for example. The singer has no business marching into the White House with an itty-bitty briefcase clasped between her thumb and forefinger (with just enough room inside to hold her beloved drivers license) but still, it resonates. More than some reclamation of alpha-male stereotypes, there’s something knowingly performative – bimbo even – about the briefcases of today. It’s camp. It’s Elle Woods pulling out a fluffy pink pen in Law 101. It’s dressing for a She-E-O runway on the Drag Race main stage. It’s executive. It’s entrepreneur Barbie.

IT’S THE TIKTOK-IFICATION OF FASHION

There is a loving disconnect in how these briefcase-brandishing celebs have been styled. Whether worn with sky-scraping heels on Gaga, a baby pink mini skirt on Olivia, or a sheer halter neck on Bella, there is a dissonance between the accessory’s stern, corporate history and the levity of the rest of their outfits. And that incongruence is made all the more enjoyable knowing that there is absolutely nothing inside any of those briefcases – which would make sense considering Bella Hadid actually used hers as a place mat.

This pick-and-mix styling resembles the way in which social media – namely, TikTok – has changed fashion. The For You Page is basically a running pastiche of trends pilfered from different eras in style and subcultures, with little context, or care, as to where they came from. Although that creates a flattening of sorts, that’s not necessarily a bad thing. It’s the equivalent of wearing a band’s t-shirt and not really knowing any of their songs. For an online audience, these bags are not only “vintage” but genuine office merch. And in this way, the briefcase’s popularity rides on novelty, nostalgia, and their enduring ability to draw out a double-tap. See Saweetie’s collaboration with McDonald’s, for instance, which just launched alongside a Ronald red, Brandon Blackwood briefcase.