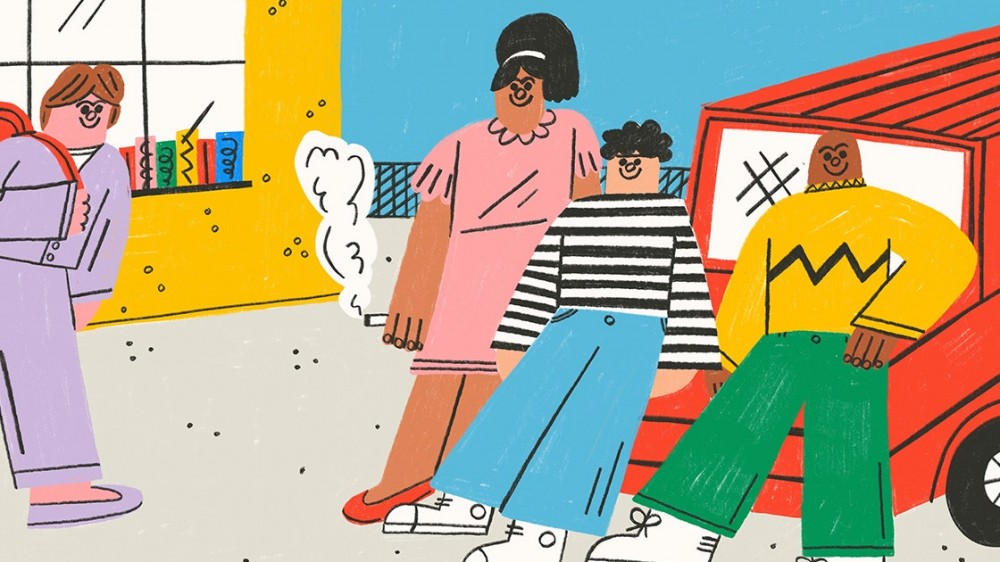 To listen to Dana Spiotta read this profile, click the play button below:

THERE is a photo of me at my eighth-grade graduation from Orinda Intermediate School in 1980. I am a doughy, awkward 14-year-old in a cream-colored Gunne Sax dress and strappy, mid-height cork-wedge sandals. I remember insisting the dress had to be Gunne Sax, and it had to be white, because that was what all the girls were going to wear. Gunne Sax was a popular ’70s San Francisco brand known for a very specific style: flouncy, gauzy, sort of prairie Victorian. Needless to say, the fussy dress was particularly unflattering to my plush middle. I hated the dress, in fact. But I wore it because I wanted more than anything to fit in, to be accepted.

That summer, I was determined to make a fresh start of high school. Here was my opportunity to crack the rigidly enforced code of cliques. First I would cut my long hair. I loved my long hair; it was smooth and straight and hung to my lower back. All year I had been teased about it. After seventh grade, my father changed jobs and we had to move to California from Rome, where I had attended an all-girl Catholic school. We had uniforms: white oxford shirts, blue sweaters, and watch-plaid skirts (no shorter than just above your knee). There was little room for competition on the clothes front—we all looked dowdy. And, without boys around, we were free to be outspoken, smart, kind even. I remember a lot of arm locking, hand-holding, and hugging. Orinda was a small, conservative, wealthy suburb of San Francisco. (It would become infamous a few years after I left as the place where one girl stabbed and killed another girl because she was jealous that she hadn’t made the cheerleading squad.) School in Orinda was, frankly, a vicious place of privilege and competition. Even the teachers favored the popular girls and disdained the “weird” kids. The stakes were high—I was not popular, but I was not hated either. I was lumped in with the nerdy kids; I had a couple of friends. But at any minute, I could be ditched and sent plummeting to an openly hated group. It was brutal. I had to make sure I fit in.

Many girls had the Dorothy Hamill cut, a sassy wedge that looked cute with earrings. If girls had long hair, it almost certainly was layered like Farrah Fawcett’s, with curled, wingy bangs. I got the cut. But I never really mastered the art of using a curling iron (curl under, and then comb back in a feather), so I could never get it to look right; it just hung in sad commas on either side of my center part. I also made my mother buy me pastel Izod or Ralph Lauren polo shirts, which were worn with pulled-up collars. I wanted turtlenecks under yellow Fair Isle sweaters, like Elizabeth McGovern’s in Ordinary People. I planned to pull my tiny gold locket on a chain up and out so it would hang just-so out of the top of the turtleneck.

I remember the outfit I chose for the first day of high school, an insipid lavender cotton cardigan with snaps instead of buttons and matching lavender high-waisted pants with, yes, lavender ballet flats. It was very matchy-matchy, and I did not “pull it off.” As freshman year progressed, I kept my head down, and the popular girls occasionally smiled at me. I knew my place and did not try out for cheerleading, for which there were three teams. All the cheerleaders wore expensive, cute cheer outfits on game days, which seemed to be every day.

I noticed one group of kids who did not dress at all like the popular kids. They hung out in one area of the parking lot at lunch and played music on a tape deck. I was warned to stay away; they took drugs and went to nightclubs in Berkeley. They were not popular, and they were a little scary to me, even though I owned many of the records they listened to (Talking Heads, Elvis Costello, Blondie, The Clash. I had a huge record collection, from Eddie Cochran to the Beatles to Bowie to Television. The popular girls listened to Rush or Bruce Springsteen. I had those records too). I watched them from a safe distance. Some of the boys had short hair and stovepipe pants. They wore Chuck Taylor high-tops or thick-soled creeper shoes. A few of the girls wore fingerless gloves, tight black jeans, and layered tops, with tons of smeary eye makeup and red lipstick. (The popular girls wore a sharp line of blue or black on the inside of their lower lashes. Blue shadow on top. Lip gloss.) Others had vintage rayon dresses that they wore over jeans and then cinched with a concha belt. But one girl among them fascinated me. I remember her in a jacquard gold minidress with white lipstick and cat-eye liner. Her hair was short but back-combed into a mini beehive. Once she caught me staring at her, and I looked away. I remember also a kind of stewardess A-line dress with go-go boots. Where did she get those clothes? I knew there must be vintage-clothing stores in San Francisco, but in that pre-internet age, I didn’t know where to begin. How did she get to be so free, so different? I wanted to talk to her, but I did not.

Then in December, I was in our den doing homework while my dad watched Monday Night Football. They announced that John Lennon had been assassinated in front of his apartment. Of all the records I had, the Beatles’ were the most precious to me. I was devastated.

I went to school the next day, that world of popped collars and cheerleader skirts and Rush. And then I saw her: She wore a cream shantung dress suit with white tights and white kitten heels and a wide black mourning armband over her jacket sleeve. Her expression was sober and serious. I was struck. What she wore communicated something to the world, to me. She felt what I felt. I belonged with her, with the weird kids, not with the Gunne Sax dresses and the feathered hair.

It took until the next year for me to change. Over the summer, we moved to L.A. It was my big chance to go New Wave. I discovered Melrose Avenue—a street of thrift stores, record shops, and edgy boutiques. I bought some vintage dresses, got some jeans at Fred Segal and had the ankles tapered in. Clothes I liked. Clothes I looked good in. Of course, when I arrived for my first day at this urban, arty high school, everyone was dressed like that.

Dana Spiotta is the author of five novels including the forthcoming Wayward.