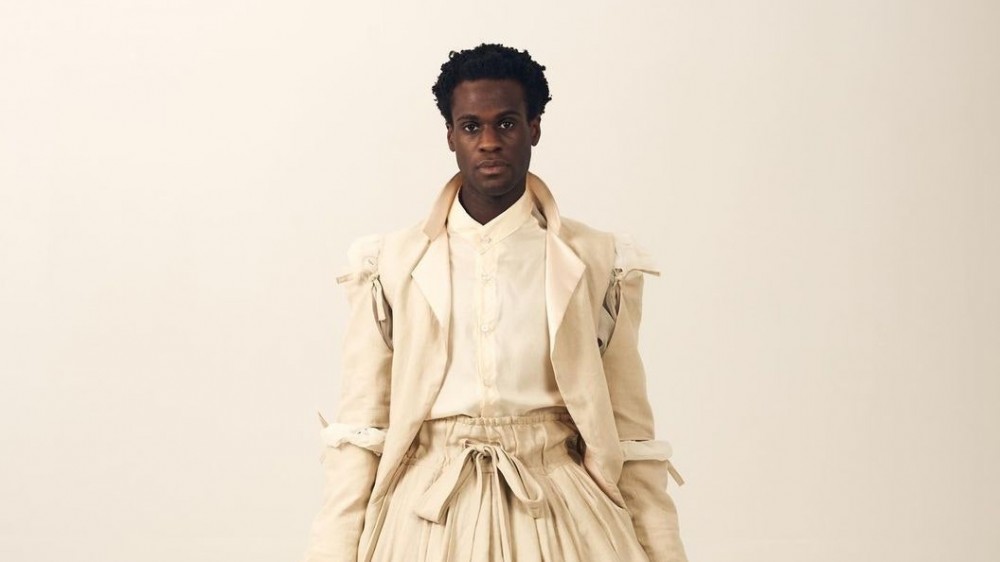 Curtis Cassell aims to shake the binary stereotype within the bridal world with his label, Queera. It’s not the standard tuxedo or a princess wedding dress, but rather looks with a baroque, almost renaissance feel with high collars and exaggerated puffed sleeves, modernized with slices up and down the sleeves or ties trailing up the slit of a skirt. The pieces aren’t made to fit a specific person, but rather, everyone, especially those within the LGTBQ community. 32-year-old Cassell has been creating wedding looks, among ready-to-wear, for a few years now. Billy Porter wore one of his designs—a royal blue shirt dress–for an Oscars after-party in 2021. Even Queera’s Instagram handle, @queerawang, is a tongue-in-cheek spin on “typical” bridalwear.

While Cassell’s clothes have a fantasy touch, they’re based in architecture. The designer, who learned to sew from his mother and “old ladies on YouTube,” grew up in a small town in Ohio and left to attend a small college in Chicago where he studied graphic design and architecture with a concentration in furniture. “Everything was just so on the computer and the deeper I got into college, the more I needed to make things with my hands,” says Cassell. It was around 2007, which Cassell refers to as the “Lady Gaga era” when he was making “wearable sculptures”. The local drag community caught wind, and Cassell began making custom pieces for them.

After graduation, Cassell worked as a wedding caterer with a mostly LGBTQ staff. “The conversation always turned into what our weddings would look like,” says Cassell. “I was amazed at the first question we always ask each other, even as queer people, was, ‘Oh, do you want to wear a suit or a dress?’” While talking with a lesbian coworker about her upcoming wedding, Cassell started to conceptualize bridal designs. “I was sketching her in these tuxedo onesies. And then I was sketching myself in ballgowns,’ he says. “Then it was just these exquisite designs of tops and bottoms in a scale of feminine and masculine.”

Years later, and his line’s aesthetic has grown to be romantic with a Renaissance feel. “I refer to myself as a delusional romantic,” says Cassell. One blazer is sliced at the shoulder and elbow, fastened together with fabric. It reminds me of something Romeo would wear in a production of Romeo and Juliet. (A similar blazer comes in red but with chiffon puffs in lieu of slices.) For a modern touch, the trousers come with an elastic waistband.

On the more extreme end, Cassell created a sheer, hand-beaded shirt dress with a fishtail train, worn by a male model in the lookbook. Think: a more demure Bridgerton. At times, Cassell’s designs are so extreme—and large—that he has to adjust his surroundings. “In my last apartment, my room was 9 feet by 11 feet. I’d take things out into the hallway sometimes,” says Cassell. “I used my bed as a cutting board, and I’d roll over in the middle of the night and there would be pins by my face.” While making a 14-foot train for a dress, he had to rent a temporary workspace by the hour at a studio in Gowanus. “I had to literally rent a loft just to trim and hem these dresses,” he says.

Next, Cassell is branching out from bridal but creating more general formal wear. “It’s all bespoke,” he says. Ultimately, he also wants Queera to tap into a younger generation. “I’m trying to dress queer kids for prom and homecoming. I want to dress couples for their wedding. And the red carpet,” says Cassell. “I want my brand to be heavily involved in the LGBTQ community. That's very important to me.”