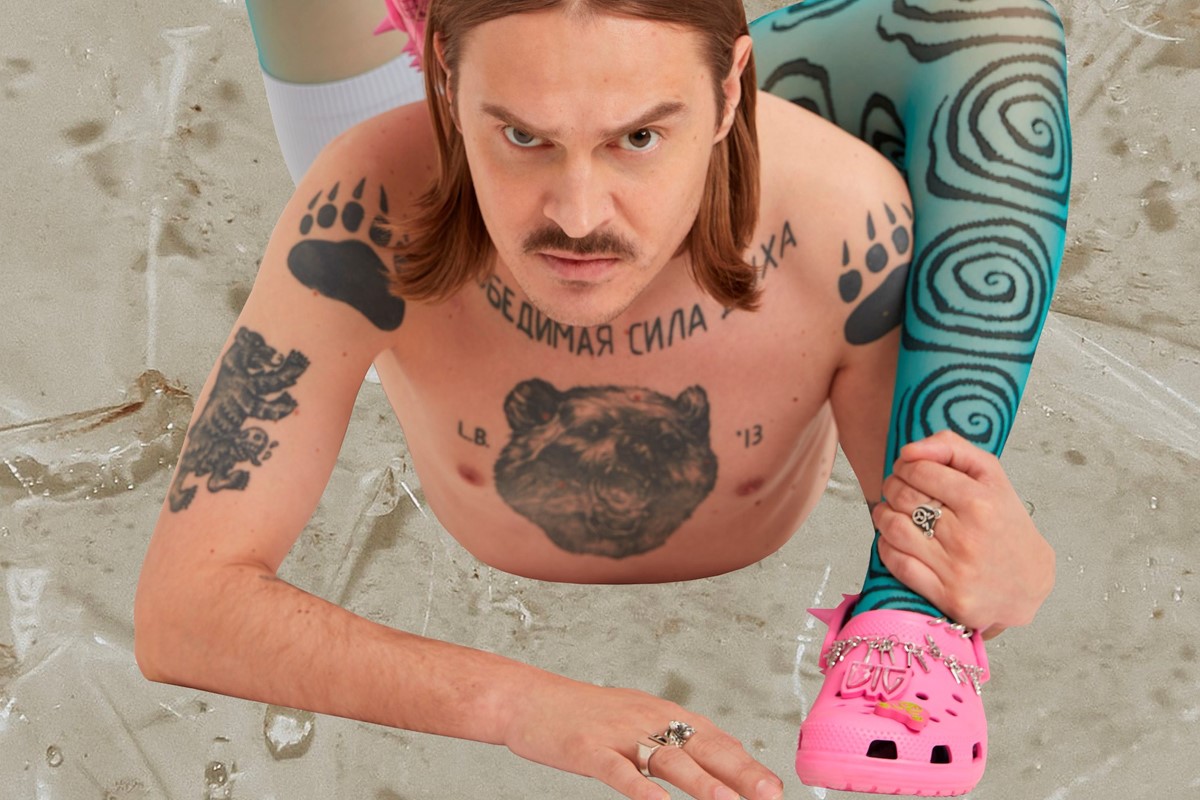 The viral electro-rave crew pull from bubblegum pop and punk aesthetics for a fun limited edition shoe line with the iconic clog, celebrating the release of their latest EP COVERS

Scrolling through your TikTok FYP last year, you might have heard and seen the vastly-memed ‘Skibidi challenge’. “Skibidi ua-pa-pa, Skibidi boom-boom, ay, Skibidi boom-boom-boom-boom, ay,” the turbo-pop, earworm of a rave tune goes. The challenge was performed by thousands, joining in with Russian rave band Little Big for the latest dance craze. On YouTube, the tune has clocked more than half a billion views with a wacky video featuring dancing dinosaurs and the riotous, flailing skibidi dance moves by the quartet – Ilya ‘Ilich’ Prusikin, Sergey ‘Gokk’ Makarov, Sonya Tayurskaya, and Anton ‘Tony’ Lissov. With over 20 mind-melting, viral music videos in their arsenal, viral crazes from “Uno” to “I’m Ok”, and a celebrated saga of albums, of course they repped Russia in 2020’s Eurovision too.

WTF is going on this menswear season?

And so, Little Big’s newly announced partnership with Crocs for a limited edition collaboration feels astute – it’s the joyous marrying of a zeitgeist-capturing band with the playful, iconic clog of creatives. The enduring shoe brand has partnered with boundary-pushing creatives from upcycling design-mind Nicole McLaughlin and Latin pop star Bad Bunny.

The collab consists of two colourways, one black and one pink. The Little Big X Crocs Classic Black Clog has a punk aesthetic with its studs, spikes, chains, and silver Little Big JibbitzTM charms. The Little Big X Crocs Classic Pink Clog taps to the beats of bubblegum pop, but with an edge – also studded with the Little Big JibbitzTM charms, it also features a spiked backstrap, piercing-like embellishments, and a charm chain. Want to make a scene, a statement, or an algorithm-dominating dance visual? Here you go.

“We became Crocs fans about four years ago,” Little Big say, “because they were so controversial and strange, that they were actually beautiful. Initially the fashion crowd was totally against them, pretty much only your grandpa would wear them. I think back in the days you’d need to be very brave and confident about your style in order to wear Crocs.”

And how would they style themselves in their statement shoes? “With head to toe black.” For clothing, “Saint Laurent, Prada, Margiela, and Uniqlo are our faves.”

As we celebrate the Crocs collab and the group’s fourth EP COVERS, the group let us in on a typical day in their lives, between viral video stunts, slinking around Moscow, and making raucous rave bangers. With an eye across Russia’s expansive rave scene, the group tip us off to Mutabor, a recently opened club in an old machinery plant. “It is our place to go for more underground gigs.” The band recall their party heydays in St. Petersburg – “There’s this place called MOD, it’s a very old club where we used to hang out, our soul is still there.”

“We’ve played our solo gigs at the Megasport arena in Moscow, and Ice Palace arena in St. Petersburg,” they add.

As for the current creative scene, the group rate 21-year-old up-and-coming producer Slava Marlow. Outside of Russia, they’ve recently travelled to Seattle and found themselves lost in Seattle’s Museum of Pop Culture, then Atlanta’s “sick” trap museum.

The band spend most of their time together in the studio working on music: “Our creative flow happens when we hang out together, it’s frequent for bands to meet only for work purposes. We prefer to exist as a family and that really helps us to remain creative. Sometimes, we can be driving all together when an idea for a song comes up, we record a little voice memo, and send it to our producers who then start to cook some instrumentals.”

Crocs and Little Big’s shoe collab will feature in the group’s just dropped music video, a cover of the iconic 90s hit “Everybody”. The EP COVERS features a swath of cover songs that traverse their dappled music taste – Aqua, Ramones, Nadezhda Kadysheva, and Ricchi e Poveri. Think of the “Everybody” visual as a cross between Wes Anderson’s The Grand Budapest Hotel and cult cartoon fave Shrek for a contemporary, pop culture-inflected fairytale – naturally. Want to get in on the viral visuals too? Crocs and Little Big are launching a fun Instagram AI filter that allows fans to impose their faces onto the characters of the “Everybody” music video. For any fans that post the video on their IG stories and tag @CrocsEurope and @LittleBigBand, they’lll be in with a chance of winning the ultimate Crocs collectible item: Little Big x Crocs rollerskates. So, get your studded Crocs on, get the lyrics up, and get involved.

The Little Big X Crocs Classic Clogs are available to purchase on June 22 at 5pm CET. Head over to the Crocs Europe Instagram on June 22 at 4.30pm CET for a live Little Big concert. Stream and download COVERS now