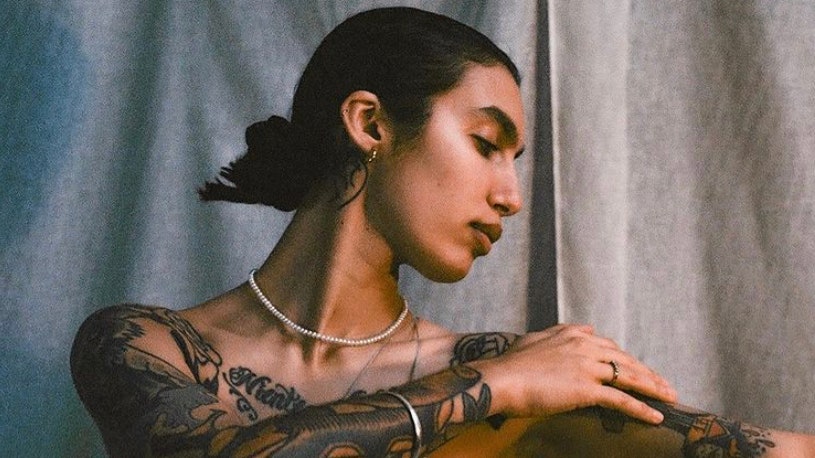 Central Saint Martins student Namita Khade loves being able to control a piece of clothing right from the start. She wields this power in her custom “knitwear experiments,” as she calls them on her Instagram. “It all starts there. It’s the foundation of clothes and designing clothes. It’s all about the fibers you use. You really start from scratch,” says Khade, who learned to knit just weeks before starting at CSM in 2018. Her designs, slinky dresses and tops with plentiful cutouts which go far beyond knitwear staples like sweaters and scarves, have a romantic yet grungy feel and have landed on the likes of Kim Kardashian.

Khade has a talent for making knitwear look both heavy and light. Sometimes that’s because the item is translucent, as is the case with a striped dress with an earthy color palette, or because of the way the pieces drape and weave in and out of itself, allowing for cutouts. Some are held together by upcycled key clips or fragile beads lifted from back-of-the-closet items like an old purse. “You see the way people [change] when they wear something sleek and the way that they feel. [There’s a] confidence, that feeling of freedom, and having no boundaries with what you want to put on your body,” says Khade. She tries to make that feeling of ease as obvious as possible to anyone that looks at her work.

It was Christmas time last year when a friend reached out to ask her to create a garment for his girlfriend. What started as just another one of Khade’s creations would soon become the custom “Freshwater Pearl Dress,” a sand colored, form fitting, mid-length, delicate dress pieced together by actual freshwater pearl embellishments. It takes over 8 hours to gracefully assemble the hand-sewn dress. “My design approach is rooted in curiosity and wanting to learn new technique, this way I get to be experimental and let go of structured and constrained fashion design,” says Khade. “[My approach] is really free and much less direct than taking the sketch to toile route.” Six months later, it landed on Kim Kardashian, who posted an image of herself in the dress to Instagram. “I think the reaction to that gift made it feel so special to me,” Khade says. After Kardashian’s post, Khade made the dress available to order with 10% of each sale being donated to COVID-10 relief in India.

Knitwear is in the midst of a renaissance led by artists like Khade, who are consistently pushing boundaries. Over the past year, with people staying at home, crochet and knitting became a popular hobby—and some turned it into a brand. Just look at JBD apparel, which has also been worn by Kim Kardashian. There’s also brands like Fang NYC, which champions queer self-confidence. Khade feels grateful to be a part of what can certainly be considered a movement. Next, Khade is focusing on the present and exploring each part of her design journey with open mindedness. The brand will resume taking orders as early as July 5th of this Summer. With a final collection still to present this year at Central Saint Martins, Khade is just getting started.