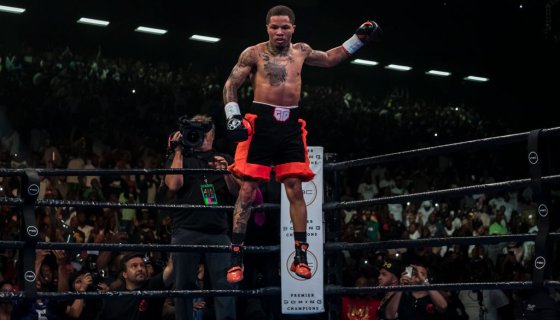 Gervonta Davis might need to enroll in some anger management classes or something of the sort after a disturbing video surfaced this weekend. The WBA Lightweight champion the mother of his child during a Super Bowl Weekend event, and the entire moment was caught on video.

Davis, 25, is seen on the video at a charity basketball game in Miami, Fla. slapping a drink out of the hand of the mother of his child, Dretta Star and then grabbing her by the collar of her coat before roughly whisking her out of the arena while people looked on.

The boxer nicked named “Tank” took to Instagram to explain his side and state that he didn’t assault Starr.

“I never once hit her,” Davis wrote.”Yeah I was aggressive and told her come on. That’s the mother of my child. I would never hurt her.”

To those who peeped the video Twitter, it looked like a lot more than “come on, we’re going home” and the comments have been intense since the footage went public. Oddly enough, a flurry of comments to the video came from a lot of men trying to get jokes off in saying that they wouldn’t have tried to intervene lest they get knocked out by Davis.

However, some users highlighted that Davis, while a  world champ, is only about 5 feet 3 inches tall and around 130 pounds. Basically, a small dude with super-fast hands. And clearly, he had men in the venue shook including those in the area who witnessed the moment up close.

We’ve got Twitter reactions to Gervonta Davis allegedly roughing up Dretta Starr below.

Not the brightest thing Gervonta Davis has ever done…..😰🤦‍♂️🤷‍♂️ pic.twitter.com/AtSJoGz2Iz

Me tryna stop gervonta Davis from snatching up his baby mama pic.twitter.com/IFYTgq53FB

This is the most that anyone would’ve done when Gervonta Davis yoked her ass 🤣🤣🤣 pic.twitter.com/gHRRqDx3Iq

Me in the crowd if I see Gervonta Davis dragging his bm. pic.twitter.com/DJxAQ2BIUB

Gervonta Davis gotta be out his mind to grab his baby mother up like that in public. If he do that in public no telling what he did when they got in the car and left 😣

Dudes talking about “who is going to intervene with an angry Gervonta Davis?”, as if it wouldn’t take two normal sized men or one BJJ practitioner or wrestler to subdue this 5 foot, 130 pound man. You internet gangsters need to hand in your nerf guns. pic.twitter.com/skomNoIM7F

Reading through the tweets about Gervonta Davis. I can tell a lot of you niggas beat bitches and a lot of you bitches happily get beat pic.twitter.com/agcjfz6Xzk

Lawd, there are men saying “I need context” for the video of Gervonta Davis snatching up a grown woman and I just…. pic.twitter.com/6ZUfPQLiCv

Gervonta Davis is a bitch, that is all.

Gervonta Davis choking up the mother of his child and damn near dragging her in public and all I see is men with jokes on this app. Yall are never willing to address issues of abuse. Then he gon say he dont abuse her. Nigga what you think dragging her by her shirt collar is? pic.twitter.com/L0cNqIJUWt

That Gervonta Davis video is so triggering to me!! Ladies/ women this is why it’s so important that your significant other sees you as his equal and respects you as such if he treats her this way in public I can only imagine how she’s treabehind closed doors.

Like I know Gervonta Davis is a champion boxer, but really i think i could whoop his ass, he 5’5” 130 lbs, ima finna see if he a champion wrestler, ain’t nobody in a boxing ring slammed him on his shit lol

There’s no excuses for what Gervonta Davis did. Stop excusing this dumb ass behavior.

Ain’t no man 5 feet putting his hands on me !!!! idc if Gervonta Davis is a boxer… calling my family to air shit out pic.twitter.com/xMiS2roqRN

It’s funny how all these niggas have so much to say about Billy Porter & Lil Nas X but have been radio silent about Gervonta Davis. pic.twitter.com/mYc28kcyvv