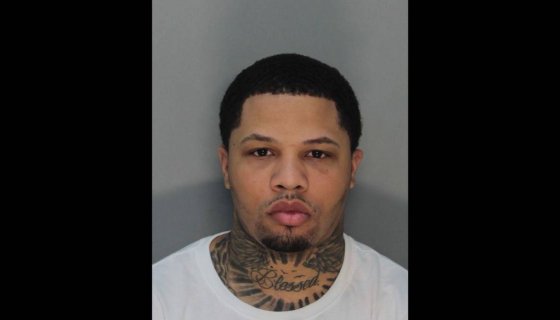 got locked up after video of him manhandling his baby mama went viral. The pro boxer was arrested for domestic violence charges, obviously.

Davis was seen in Florida. Not much was done at the time—would YOU risk taking a punch from Mr. Davis? But clearly, someone reported his behavior to the authorities.

Reportedly, Davis is facing one count of “simple battery domestic violence.” Unfortunately, we’ve seen this type of thing play out before—so it’s likely the baby mama won’t cooperate, and the charges will be dropped. But that’s all conjecture at the moment.

According to reports, it was Davis’ ex-girlfriend who he is seen dragging backstage where they continued to argue. By her reaction, she seems to be used to this type of treatment.

Cops say, “As a result of an ongoing investigation after being notified through social media and the victim, on Feb. 1 2020, [Davis] was observed battering his former girlfriend whom [sic] have child together.”

“[Davis] surrendered himself, to the Coral Gables Police detectives assigned to the case.”

For his part, Davis put out a statement over the weekend denying striking the woman.

“I never once hit her … yeah I was aggressive and told her come on,” Davis said.

“That’s the mother of my child. I would never hurt her.”

The kicker, Gervonta Davis is a protege of Floyd Mayweather Jr., who .  The struggle is too real.