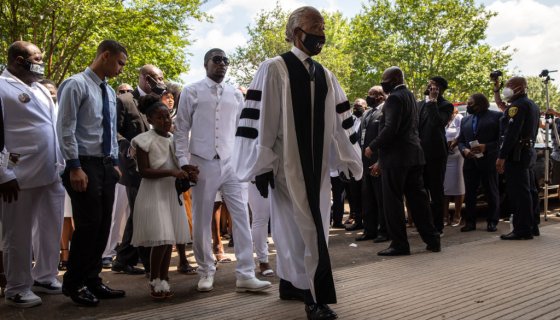 After hosting memorials in Minnesota and North Carolina, the family and friends gathered of gathered for one more final time in Houston, Texas, earlier this week for the funeral laying Floyd’s remains to rest.

Following a public viewing on Monday with over 6,000 mourners paying their respects, George Floyd at the Fountain of Praise church in his home town of Houston on Tuesday (Jun 9). The nearly three-hour event was filled with moments of encouragement, consolation, and shared memories as speakers came to share their condolences with the Floyd family as hundreds of mourners filled the pews for early afternoon service. Family, friends, and prominent guests, including , Channing Tatum, and Al. B. Sure gathered to celebrate the life of the 46-year-old and called for a total reform of the police practices that led to an officer pressing his knee into Floyd’s neck for eight minutes, killing him.

Around 500 mourners are gathered for the funeral of #GeorgeFloyd, including his brother, son, Cal McNair, and actors Jamie Foxx and Channing Tatum. #RememberingGeorgeFloyd 🕊 pic.twitter.com/3oTubw3YoL

Opening the service, Kim Burrell took the stage to sing “God Will Take Care of You” before sang an acapella version of Boyz II Men’s “So Hard to Say Goodbye.”

“This man changed the world, he changed the world for the better,” Ne-Yo said before singing. “I just want to personally thank George Floyd for his sacrifice so that my kids could be alright later on.”

delivered a powerful eulogy, addressing Trump’s crass response to the protests that have enveloped the nation.

“You take rubber bullets and tear gas to clear out peaceful protesters, and then take a Bible and walk in front of a church, and use a church as a prop,” Rev. Sharpton said. “I have seen grandchildren of slave masters tear down slave master statues.”

According to the Intelligencer, Floyd’s younger brother Rodney delivered a passionate speech about his brother noting that his desire was always to “change the world” before admitting that he is still processing the loss.

“Third Ward, Cuney Homes, that’s where he was born at. But everybody is going to remember him around the world. He is going to change the world. If he was told he would have to sacrifice his life to bring the world together and knowing him, I know he would’ve done it,” Rodney Floyd said. “It seems unreal because, you know, every day is like waiting on that phone call. I’m still calling his phone number.”

While the public outpour of support brought comfort to family and supporters, it was two notable moments of significant change that took place making the moment historic.

At the service, Houston Mayor Sylvester Turner declared that he will sign an executive order banning chokeholds in the nation’s third-largest city, before proclaiming June 9 as George Perry Floyd, Jr. Day in Harris County.

The second came when Presidential hopeful delivered his speech calling for “racial justice” before stopping short of agreeing to defund the police, CNN reported, noting to George Floyd’s daughter, Gianna, that her father changed the world.

“Ladies and gentlemen — we cannot turn away,” Biden said. “We cannot leave this moment thinking we can once again turn away from the racism that stings at our very soul and from systemic abuse that still plagues American life. Now is the time for racial justice. That’s the answer we must give to our children when they ask why. Because when there’s justice for George Floyd, we will truly be on our way to racial justice in America. And then, as you said Gianna, your daddy will have changed the world.”

Check out the rebroadcast of the historic service below.