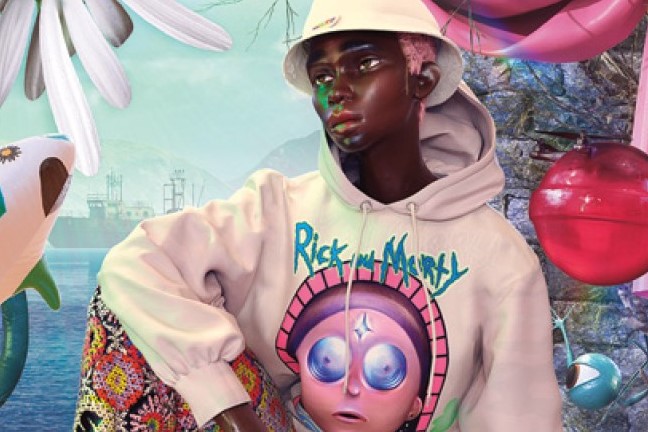 Giuliano Calza, creative director of GCDS, wants to stop the earth and get off. And who can blame him? “I watched The Passenger once and thought about going to the moon. Just imagine all the things you could do,” he says. “I’d definitely relocate my shows there, Hello Kitty and Care Bears included.”

While Elon Musk puts the finishing touches to his SpaceX Starship, Calza still has a few years before he can zoom out of here completely. In the meantime, he has forged his own Martian Utopia and it’s likely some of us have already visited – given it was the setting for the GCDS SS21 show back in September.

Today, we’ve got a ticket back to the brand’s cosmic dreamscape via the Spring 2021 issue of Dazed. Lounging dockside, Calza introduces us to his latest avatar on a GCDS special cover, complete with Rick and Morty hoodie and crocheted stoner pants. The story develops further inside the pages, where the banal surroundings of a laundromat, diner, and leisure centre have been transformed into the most surreal of environments by digital artists Dario Alva and Razorade. As time, space, and dimension collapse in on themselves, Calza makes a powerful statement on the limitlessness of the outside world and its current intangibility.

“It has put spices in my soup”, says Calza, reflecting on how a pivot to CGI has pushed the brand’s creative boundaries. He even jokes that his favourite look from the collection, a hot pink leotard, is probably being “worn by a girl walking around a small spaceship” somewhere in another dimension. Such a boundless imagination has not always been easy to wrangle, though. “Nothing was taken from a library so I’ve had to choose everything from the background details to the model’s nails,” the creative director says. But it has paid dividends, as Calza has become “even more conscious of every aspect of a show and how every detail affects a story”.

As a result, CGDS has broken free from the restrictions of terrestrial life and while “we can’t be united on this planet,” Calza reminds us that we “always could be on another one”. And you know what? We might just take him up on that.