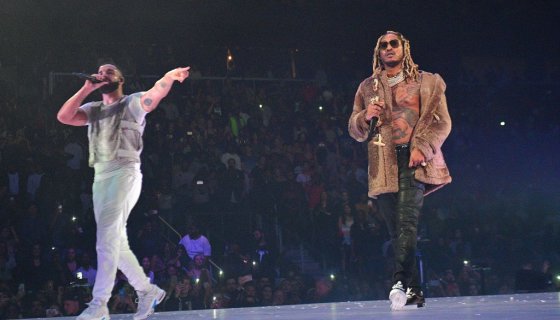 Future made some noise with the “Life Is Good” single which featured past collaborator and the pair appeared together in a . The song has now been remixed with the additions of DaBaby and Lil Baby with a largely diminished role for Drizzy, which fans on Twitter took notice of.

Earlier in the week, Future teased the remix after playing the new features his Instagram Story feed.  The production from D. HIll, OZ, and Ambeeza remain unchanged in its entirety, but new verses appear on the track’s part one half from Future along with a new chorus.

On the second half beat switch, Da Baby opens it up with his customary bouncy flow with Lil Baby anchoring the track in capable fashion. Some are saying Twitter that Lil Baby may have stolen the show with his verse. However, it was Drake’s truncated verse and chorus that had a lot of folks wondering what was up.

Check out the reactions to Future’s “Life Is Good Remix” featuring Drake, DaBaby, and Lil Baby. Sound off in the comments and let us know what you thought.

drake when he wakes up and sees the “ life is good “ remix pic.twitter.com/RuD4VzY8b4

Don’t want a Life Is Good remix unless Drake’s on the 2nd beat.

Why did you remove drake !? It says feat drake!! Where is the hell is his verse … life is good remix pic.twitter.com/TQDxNTxjgx

Wait, they just completely cut Drake out of the Life is Good remix??? pic.twitter.com/WGoHWzMbDm

#drake after 5 seconds on the "life is good" remix 😂😂 pic.twitter.com/xeZvHzexwI

Drake, Future, and both babies on the life is good remix pic.twitter.com/WuYS1toi8W

I love Drake, I love Future, and I fw both babies… but this Life is Good remix needs to be burned at the stake pic.twitter.com/4OxUcPfhHD

Drake waking up to see he was completely cut off the Life is Good Remix: pic.twitter.com/gzkykSLXw7

Drake in the studio watchin Lil Baby, DaBaby, and Future record verses for the Life is Good (Remix)…… pic.twitter.com/6rBJIyQRaQ

So future basically took drake of in the remix 🤔🤔, side note lil baby ripped #lifeisgood

Drake on the “Life is Good” remix pic.twitter.com/YVkIuuzO4J

On the life is good remix @1future said “ yeah she call me daddy coz my money long like STEVIE “ pic.twitter.com/wfQsFnqVOd

Honestly we was good without a “life is good” remix. pic.twitter.com/ye1OKsa5GD