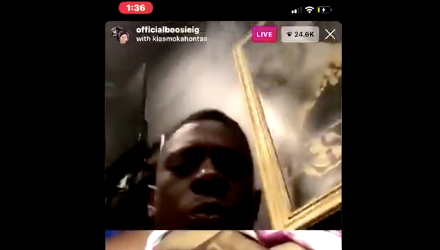 It might be a wrap for QTD (Quarantine Titty Day) on IG Live. Instagram has finally hit up and told him to chill with the ass and titties on the social media platform.

The “Wipe Me Down” rapper has become quite famous on Instagram thanks in large part to his raunchy during the coronavirus shutdown. Like the rest of the world, being locked up in the crib got him going stir crazy and to help him quote Boosie just wanted to see some T&A and was CashApp’ing to see something.

The Quarantine got This nigga cashappin hoes on Ig live 😂😂😂 pic.twitter.com/4KBYc4FMAU

Fans have been asking Boosie to do more streams, but on Wednesday (Mar.25), he revealed the folks at Instagram has finally told him to chill.

“Instagram told me they were gonna take my Instagram if they see any more nudity. So, I just DMed and hit ’em back in the email and asked ’em if y’all could just dance and shake that ass. You know what I’m sayin’? I’m waiting on that response. So that’s what we waitin’ on for QTP.”

Well, judging on recent IG Live shows from , which featured a lot of women twerking and providing visual stimulation for the singer/rapper and his followers, that might be a safe route for Boosie to go.

#torylanez back at it again on IG live gettin shortys to go wild 👀🔥😳 #QTD pic.twitter.com/uQunQSQPAj

We won’t be shocked if Instagram also tells Fendi to relax as well. Until then, keep tuning in, we sure will.