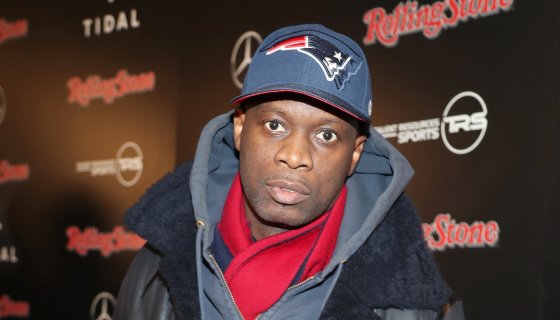 He might sit ninety degrees underneath palm trees, but the Fugees rapper Pras Michel isn’t going to be doing so without the proper protection these days as the Coronavirus runs rampant through society.

Yesterday (March 16), Page Six caught Pras walking into Manhattan Family Court draped in a full body Tyvek suit to ensure he didn’t take home the dreaded “‘Rona” that’s already touched , Rudy Gobert, and possibly, (fingers crossed!). Pras found himself cuffed up last week after failing to prove that he had made a $20,000 child support payment to his babymama, Angela Severiano, and yesterday showed up to court ready to prove his innocence while protecting himself. Pras owes Severiano $127K in child support backpay.

I want to first thank NY family court for understanding my situation, but I want all the fake news and everyone to know I’m fully committed to taking care of my son and I Am not nor ever was a deadbeat dad, I flew all the way from LA to NY court to make payments and coincidentally the lawyers nor the mother appeared this morning but that’s neither here nor there we here now. I’m in my Chanel hazmat suit to assure the health safety of both me and people around the court. And thank you everyone who truly support me during these unfortunate times and extremely special shout-out to those who turned their backs on me blessed always the satan you worship hands aren’t long enough to box with my God. Be safe everyone out let’s unite for the sake of humanity and our beloved country. #corona #healthylifestyle #family #unity #haiti

We can’t blame Pras for going all out during the outbreak that’s engulfed America, especially since last week a legal intern who’d been working in that building tested positive for COVID-19.

Though the judge overseeing the case, Carol Goldstein is aware of the pandemic running roughshod through the US, he still took the time to point out that Pras was decked out in protective gear to his lawyers who were phoning in during the proceeding.

“Let me just put on the record,” Goldstein said. “The father came to court head-to-toe in full hazmat gear, full booties, full outfit with gloves, hood and a mask.”

The judge said she was having trouble hearing Michel as he was attempting to explain that he made cash payments over the weekend.

“Should I pull down my scarf?” asked Michel — whose eyes were the only exposed part of his body.

With his full-body armor on, Pras handed over some Moneygram receipts proving that he’d made payments towards his $127,000 balance. Moneygram would then forward the money to another collection agency who’d then give it to his babymama.

Though the Fugees made a killing in the mid 90’s with their album sales and shows, Pras began to struggle with his paper after the feds came for him.

Michel has claimed he fell behind on his $4,800 monthly payments after he was charged with a federal campaign-finance violation and the feds seized $74 million of his money.

He has maintained his innocence in that case.

Least he had enough to copp that suit though. It was missing the plastic face mask, but something’s better than nothing.