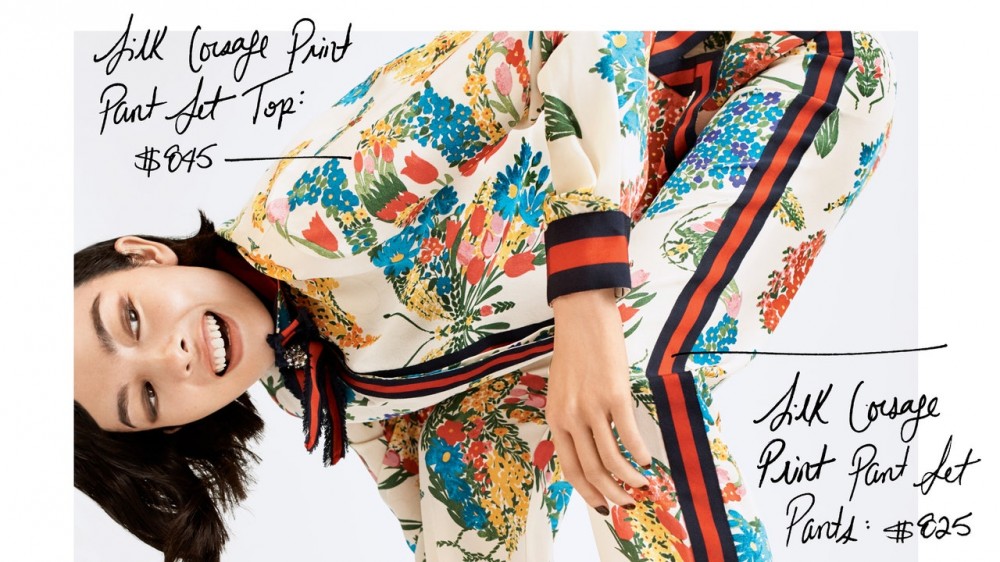 I WAS KILLING TIME outside a fashion show a few years ago when I noticed a woman in the distance wearing a beautiful deep-blue coat decorated with a flourish of fuchsia sequins. I know that coat, I suddenly realized—Dries Van Noten! I had tried it on at Bergdorf’s a couple of seasons back, and part of me loved it, but the other part of me thought it was maybe too flashy, the tiniest bit Honeymoon in Vegas—and it was $2,000. Still, as so often happens, now that I saw it on someone else, it seemed like the most desirable garment in the world.

Until recently, it would have been near impossible to turn up this elusive item—if only I had bought it when I had the chance! Not anymore. Some months after that fateful glimpse, this exact coat—in my size! New with tags!—showed up on The RealReal at a fraction of its original price. Now it is happily ensconced next to the other resale treasures I have gleaned from various sites: the rare circa-1996 padded velvet Comme des Garçons jacket; the extraordinary black Marni collar with velvety petals; the campy Balenciaga bag printed like a souvenir tote from Paris. (Someday we will go to France again.) A few of these items came to me brand-new, but others were gently worn—and if I didn’t care that another person with great taste wore them a few times before consigning, well, the rest of the world doesn’t seem to, either.

It’s not just me. Practically everyone I know is addicted to vintage and resale sites, spending untold hours both looking for things to love and consigning things that, despite their exquisite provenances, they just don’t want anymore.

“The rise of the resale market has been incredible—everyone wants to get into this space,” says Tatiana Wolter-Ferguson, the CEO and a director of HEWI (Hardly Ever Worn It), a business started by her mother in 2012 in Monaco—where, Wolter-Ferguson explains, an excess of wealth created a situation ripe for resale. “At first it was hard to get people to understand that they could off-load clothes and spend the money they earned in the primary market,” she says, “but now the taboo has blown up.”

“Blown up” is putting it mildly. You can’t argue with the numbers: In 2019, resale grew 25 times faster than retail—and what is now a $28 billion secondhand-apparel market will more than  double to an astonishing $64 billion by 2024.

“People like nice things!” says Julie Wainwright, The RealReal’s founder and CEO, explaining in the simplest terms this explosion. “And if these things are in nice condition, people don’t care if they are previously owned.” If anyone understands this phenomenon, it is Wainwright, who founded her site in 2011—the name, cooked up over drinks with her friends, was meant to convey that everything sold would be authentic high-end designer goods, no dodgy fakes allowed—and now boasts 20 million members. “The world is coming around to the fact that there is too much product—you need to get people recirculating goods.”

This new movement to recirculate arrives at the apex of a perfect storm encompassing an increasing focus on sustainability, a growing antipathy for fast fashion, brilliant new e-commerce technological innovations—and the realization that you can make money offloading your old clothes. Add to this mix the inordinate amount of time we’ve been spending recently in our homes, surrounded by all the stuff we’ve bought over the years, thinking hard about the value—both literal and metaphorical—of our wardrobes. What do our clothes really mean to us? How attached are we to the things we own? This revolution in the way we relate to consumption has transformed nearly every aspect of our lives: Why have a car when you can call an Uber? Why own a bike when many cities allow you to grab one from a street stand? Who needs a country house when you can just Airbnb?

And even as we sat sequestered in our living rooms, roaming the virtual universe, searching Vestiaire Collective for Phoebe Philo’s Céline and Byronesque for Ghesquière-era Balenciaga, we began to realize that the maxim so many of us once lived by—that too much is never enough—was not only false but downright dangerous. Too much was indeed just that—too much stuffed in our closets, polluting our fragile environment; too much for one person to ever wear and enjoy. “Forty-eight percent of millennials or Gen Z–ers,” Wainwright says, “tell us that sustainability is the main reason they consign.” But that doesn’t just mean being aware of what overconsumption is doing to our planet: It also means holding fast (literally) to what sustains us—the precious material things we cling to season after season; the clothing that has real worth for us.

Giorgio Belloli, the chief commercial and sustainability officer at Farfetch, says that his company is also tiptoeing into this burgeoning market. Farfetch’s main business is linking shoppers to thousands of stores all over the world selling current merchandise, but they have recently launched Farfetch Second Life in the U.S., which lets you trade in your designer handbags for credit to be used toward—guess what?—future Farfetch purchases. It’s part of a larger story, with luxury behemoths waking up and realizing the power, both commercial and aesthetic, of owning their histories, burnishing their legacies, and controlling the narrative. Dolce & Gabbana’s Domenico Dolce explains it this way: “In doing research we realized, with great satisfaction, that some of our vintage pieces are highly priced and often requested. This made us reflect. We have a large and well-kept archive, and some items are duplicated, as we tend to have a second collection to try to cover all the editorial and celebrity requests we have.” So, he says, the pair is now considering offering some of these coveted originals for sale.

Other luxury companies took notice when younger people began snapping up iconic products, spurring houses to delve into their own back catalogs and reissue versions of their greatest hits: Witness the renaissance of the Dior Saddle Bag, the Gucci Jackie 1961—the name says it all—and the Fendi Baguette. Prada even launched a line called Re-Nylon, which turns plastic and fishing nets salvaged from the ocean into their trademark satchels. “This is not just a trend,” Belloli predicts. “Technology will make people look at their wardrobes in a different way.”

Some luxury labels have already been forging partnerships with resale sites, with Stella McCartney again a forerunner: In 2017 the designer, who was thinking deeply about sustainability and overconsumption long before they were on everyone else’s radar, entered into a partnership with The RealReal, encouraging her customers to recycle and resell their Stellas. This revolutionary stance was echoed by Bur­berry, and last fall Gucci went a step further, not only inviting fans to part with their old pieces but putting some of their own mint stock—direct from their warehouses—up on The RealReal.

“We want sustainability to be built into the way we operate, and we want to encourage our community to really think about the idea of circularity,” says Robert Triefus, Gucci’s executive vice president for brand and customer engagement. As this year marks Gucci’s 100th anniversary, the house is also assessing how its instantly recognizable icons and symbols—all those magical Gs!—enhance the value of its vintage items. Triefus even reveals that Gucci has not ruled out selling older merchandise on its own website. “We are constantly thinking about how to enhance the life cycle of our product—and we are the best equipped to do it, since we can repair, renew, and ensure authenticity. The more that we can do to facilitate circularity, the better.”

Maybe it’s because they are so literally durable, or maybe it’s because we aren’t dressing up all that much at the moment (I mean, it’s a pandemic—where are we going?), but fine jewelry and handbags are, unsurprisingly, the hottest resale categories right now. In times of crisis, jewelry, particularly signed pieces, is almost as good as money. (In some cases, better—have you checked the price of gold lately?) Erin Hazelton, an extremely avid RealReal-er, tells me she is hell-bent on finding a large gold Tiffany Peretti bottle pendant (she already has a pre-owned medium-size one), and I confess: I would not be averse to a vintage Cartier Tank Française at a really good price.

Charles Gorra, the founder and CEO of the handbag-resale site Rebag, says that what everyone wants these days are smaller handbags—including scaled-down Birkins and Kellys. And regardless of size, Dior and Bottega Veneta—especially Dior’s insanely popular book bag—are selling secondhand for almost as much as they garner brand-new. (On the day I Zoom with Gorra, he is in his warehouse, and in the background I can see miles of packages stacked to the rafters, ready to fly out the door.) On The RealReal, the most sought-after label is Louis Vuitton, with demand for their petite Pochette skyrocketing.

“You’re at home, focused on dollars, thinking, How can I monetize?” Gorra muses. But as eager as you are to sell? That’s likely also exactly how anxious you are to feed the beast and buy, okay, just one more bag to replace the seven you’ve already said goodbye to—after all, it’s an investment! As a sweetener, Rebag will credit you with up to 80 percent of the purchase price should you choose to part ways with any of the purses you buy from them—guaranteeing you will get some of that investment back. “It’s the idea that your risk is capped,” Gorra says. “It keeps our relationship going with the customer.” In yet another example of the felicitous marriage between resale and tech, Rebag has just launched Clair AI—image-recognition technology that promises to identify luxury handbags within seconds. Snap a photo on your phone, and Clair AI will instantly generate the price Rebag is willing to pay for it. (Do we sense a whole new party game?)

If the resale CEOs are bullish on this new way of getting and spending, customers are equally enthusiastic. No one thinks we will go back to the old days, locked in a moribund system of one-sided consumption—not when we can indulge in the pure joy of buying and selling (and then buying again!) at a time when joy may seem to be in short supply. Take the case of the downtown New York artist DeSe Escobar, who’s been able to indulge a passion for vintage Prada, circa 2008 to 2016, “especially the banana collection! I was on The RealReal every day at 10 a.m. and 7 p.m., when they refresh the inventory.” (She has since moved on to a Rick Owens obsession.) Escobar prides herself on being a poster child of circularity—she lives in a one-bedroom apartment in Chinatown, where storage space is severely limited, which means she is constantly editing, selling things, and then hitting the resale sites to replenish her wardrobe. “I get bored easily and excited for fresh things,” she says with a shrug.

And really, who among us is not excited by fresh things? We may be thinking seriously about the environment; we may finally be realizing that less is indeed more—but we still want to cheer ourselves up and enliven our days with things that are beautiful and that charm and delight us, especially in tough times. The world may be upside-down, but the thrill of wearing something new endures—even if it’s only new to you.