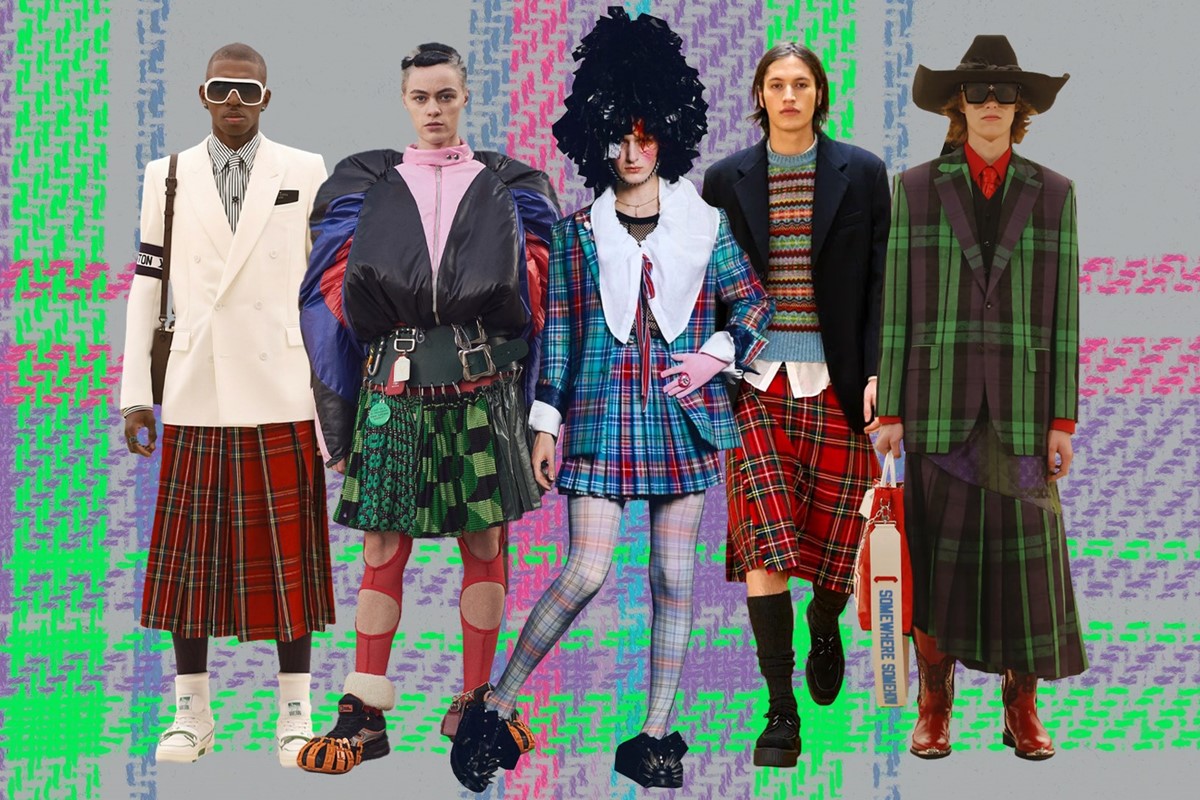 What do you think of when you think of kilts? Could it be the celtic cheese of Outlander or Disney Pixar’s Brave? Or maybe it’s the tongue-in-cheek sex appeal of Scott’s Porage Oats ads? Whatever springs to mind, it’s likely not the catwalks of London and Paris, where Molly Goddard and Virgil Abloh’s Louis Vuitton debuted kilts for SS21. Nor is it the hot seat on Jimmy Fallon, where Lil Nas X recently sported his own homage to Scottish dressing – in Royal Stewart Tartan, FYI – or the main stage of RuPaul’s Drag Race, where Greenock-born queen Rosé was giving it yaldi for Scotland in a full tartan number.

Having grown up with a view of the Highlands, a stone’s throw from where most of Macbeth went down, the kilt’s (or fhéilidh Mor’s, if you’re in the know) sudden favour with the fashion pack feels like an odd but welcome surprise. Bringing back memories of awkward teenage interactions at ceilidhs and Highland dancing lessons, I would never imagine that this sartorial symbol of my small-town upbringing would find me again many years later. Yet, as you’d expect from the fashion industry, the kilt has been reimagined past the point of recognition, enticing people to take the historic garment and reinterpret it on their own terms.

Rejecting the garment’s association with a romanticised version of the Scottish past in some far-flung corner of the Highlands, designers like Abloh and Goddard have coaxed the kilt into modernity. Rather than standing atop a munro or brooding at the side of a loch, today’s kilt-wearer is more likely to be on their way to a bar in Paris or sitting front row at a fashion show. Gone are most of the item’s rustic associations, with the kilt now saying “I know fashion” rather than “I know caber toss”. But what is it that has whipped up this sudden Caledonia-mania among designers?

To understand the kilt’s very 2021 appeal, it’s worth casting our minds back over the kilt’s rise in fashion which has, admittedly, been some years in the making. Looking back to the 90s and 00s, the garment received considerable runway air time thanks to honorary Scot Dame Vivienne Westwood – whose AW93 collection saw Linda Evangelista bedecked in a full Lochcarron of Scotland tartan look – and Alexander McQueen, who regularly tapped into his Scottish heritage with a tartan of his own design.

What makes this interpretation of the kilt so fascinating, besides the sheer camp factor, is that these designers adapted an item with menswear connotations for their womenswear collections: playing with the cut, length and fit for a more “feminine” effect. Anyone with even a passing interest in fashion, however, knows that Westwood and McQueen set out to define themselves against convention. Even while creating a garment more akin to a skirt than a kilt (kilts are traditionally knee-length, wrap around the front and sport pleating at the back), these designers harnessed the spirit of rebellion surrounding Celtic culture, rejecting the refinement of the high fashion lady for something a little bit more devil-may-care.

For decades, kilts’ exposure in popular culture fit a similar mould. Admittedly shortened and simplified within an inch of their life, kilts were confined to womenswear – just ask noted culture vulture Gwen Stefani, who churned out tartan mini skirts via her label L.A.M.B. throughout the 00s. Funnily enough, it was Kanye West of all people who would translate the kilt’s appeal for the menswear market. In what is still considered one of his most memorable wardrobe choices to date, barring Art Basel-gate, he wore a Riccardo Tisci-era Givenchy pleated leather kilt to perform live in 2012.

KanyeWest skirt was #PhreshOutTheRunway from the men's Fall 2012 collection, worn with leather leggings underneath. pic.twitter.com/6dOIq8Xe

Nine years on, we know that men wearing skirts shouldn’t be shocking, but back then the YEEZY designer’s fashion statement was just that: a statement. Attracting his fare share of criticism – rapper Lord Jamar even took the time to make a whole song about it, criticising the choice in track “Lift Up Your Skirt” – we can now look back and give him credit where it’s due for serving gender neutral style years before we saw Harry Styles on the cover of US Vogue. The Tisci-number was actually one of multiple kilts he wore on his Watch the Throne tour with Jay-Z but, after the backlash, he was forced to defend the style by disappointingly leaning on its associations with masculinity, saying; “There are warriors that have killed people in kilts in the past. Who gets to decide what’s hard and what’s not hard?”

Today and any day, it goes without saying that no-one should feel the need to justify why they’re wearing a skirt: clothes don’t have a gender, obviously. But Kanye’s rationale also happens to go some way towards explaining why the kilt is such a symbol of gender fluidity: a garment which, at first glance, would be clocked as womenswear but on further enquiry has long-running cultural associations with masculinity. With these dual connotations, kilts allow you to pick and choose how the garment is perceived: you can lean into the fact that it resembles a skirt or make like Kanye and hype up its clan heritage, adjusting the fit and length to more closely parallel traditional menswear. For anyone who wants to explore gender neutral dressing it offers up a garment which defies binaries, which is both menswear and womenswear, while simultaneously being neither.

Today, designers are harnessing this fluidity, using kilts to gesture towards a more expansive version of masculinity. Namely, Virgil Abloh, whose AW21 menswear collection saw cowboy boots and hats, LV monogram suiting, wraparound skirts, and motorcycle jackets all share space with, you guessed it, kilts. Irreverently mixing different archetypes of manliness together – from the cowboy to the business leader to the Highland warrior – Abloh takes the authority out of these gender stereotypes, inviting us to pick and choose the symbols of masculinity which truly empower us rather than restrict us to a rigid mould.

Over in London, design duo Chopova Lowena are taking a different tack: pushing the gender neutral fashion agenda with cultish kilts featuring asymmetrical cuts and pins, sometimes pairing traditional Bulgarian fabric with scraps of tartan to reference the designers’ dual British-Bulgarian heritage. Featuring a diverse range of genders in their lookbooks, the brand has made it clear that their garments shouldn’t be limited to womenswear: a message that has led to an ever-growing fanbase of men and non-binary people. What makes Chopova Lowena so appealing, however, isn’t the buzziness of their brand’s reputation, but their punk ethos – one which isn’t afraid to mash up different techniques and fabrics or rip up a traditional garment to stitch it together again.

This punk reputation is also shared by Charles Jeffrey: the Glaswegian designer and reformed club kid who has regularly featured kilts in his collections for Charles Jeffrey LOVERBOY. According to him, the kilt’s biggest appeal is that it can help us deviate from traditionally gendered dressing on our own terms. “(The kilt) is an easy way in for those who are just wanting to try out a new silhouette on the body without going directly for a dress,” he explains. “It’s also a more generic, recognisable garment that all genders can wear without too much side-eyeing from the public, and allows you to try things out without feeling anxious about what other people think of you.”

Jeffrey is positive about the kilt’s new-found relevance, noting that he “adores” how much it has permeated pop culture and style. Mostly, he’s optimistic about the horizons that the garment opens up for those who want to make their first experiments with gender neutral fashion. Succinctly summing it up, he writes; “Who gives a fuck what people think, but a kilt is for those who want to take their gender fluidity in baby steps.”