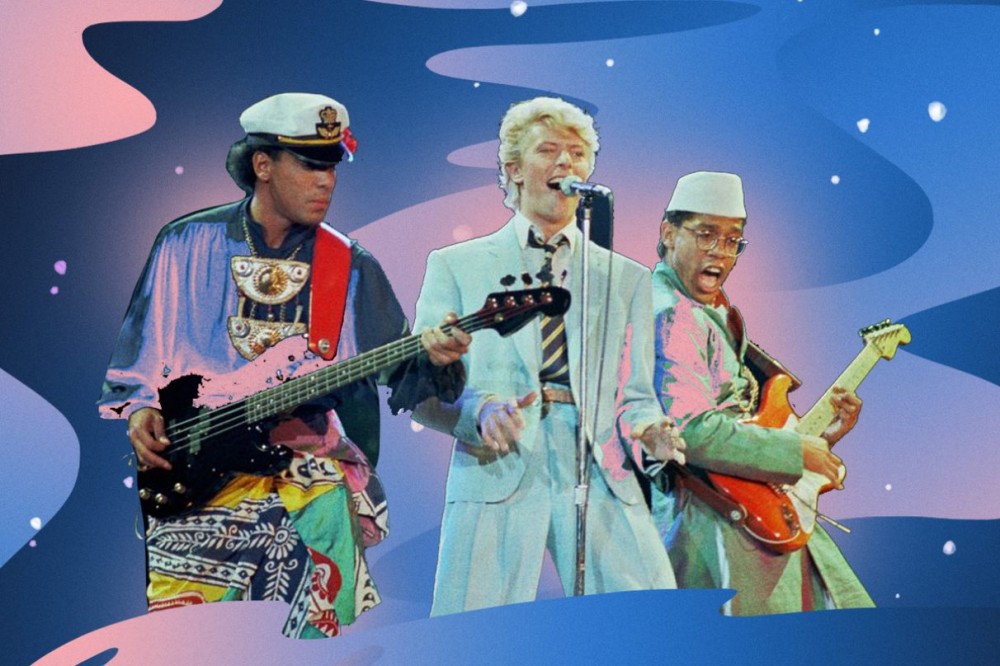 Last Friday marked what would have been David Bowie’s 74th birthday, giving us a chance to look back at one of the most amazing artists who has ever lived. Bowie was among the most forward-thinking figures of the past century and he represented the idea of a man living out his truest self—all sensitivities and eccentricities driven to the front. Musically, he gave the world an archive of classic albums and songs that still feel contemporary today while spanning a huge range of sounds and influences. To celebrate the artistic legend, we revisited some of his most notable Latine collaborators over the decades.

One of the most brilliant aspects of Bowie’s artistry was his willingness to find the right people for the right projects. While sometimes these were high-profile exchanges with cultural juggernauts such as Queen or The Muppets creator Jim Henson, Bowie often turned to musicians who played in studio sessions and live bands to emphasize a particular sound or style. Latine collaborations were especially common during his “plastic soul” era in the early and mid-1970s, when he picked up influences from Black Harlem and convened many Puerto Rican musicians from New York.

But the Latine contributors didn’t stop there. As part of Bowie’s 74th birthday remembrance activities this past weekend, artists such as Trent Reznor, Billy Corgan, Duran Duran, and more gathered for the virtual concert, A Bowie Celebration: Just For One Day. The performances included appearances from several other musicians who recorded and toured with Bowie throughout the years, including a few Latine luminaries that appear on this list.

Puerto Rican guitarist Carlos Alomar became an integral collaborator on Bowie’s 1975’s Young Americans album, co-writing the number one hit “Fame” with Bowie and John Lennon. For years, Alomar would be the live band’s musical director, thanks to a stint playing in James Brown’s band. He recorded with Bowie during his Berlin trilogy albums, as well as when Bowie transformed into a new wave pop visionary in the ‘80s. For the next two decades, Alomar would periodically rejoin Bowie both onstage and in the studio.

Bowie’s bands alternatively used percussion both live and in the studio, and these three percussionists are some of the most notable that Bowie enlisted. Brooklyn-born Rosario—who has played with legends such as Tito Puente, Celia Cruz, Héctor Lavoe, and Rubén Blades, among many others—appeared on the 1974 Diamond Dogs tour as well as on Young Americans. After working with the disco-funk titans Chic, Bronx-born Figueroa was brought in by producer Nile Rodger for 1983’s hugely popular Let’s Dance. Lastly, Velez—who famously performed with Jimi Hendrix at Woodstock—played on 1993’s Black Tie White Noise, also produced by Rodgers.

During Bowie’s reign as pop visionary in the early and mid-’80s, Rojas was his bassman, providing the low end for Let’s Dance and 1984’s Tonight, as well as on the massive Serious Moonlight and Glass Spider tours. He has since played with some of the biggest stars in the world, including Mick Jagger, Tina Turner, Stevie Wonder, Al Green, and many others. He also formed Ziroq, a flamenco/rock band that garnered critical acclaim.

Mexican photographer Fernando Aceves has been one of the most consistent and long-running concert photographers in the country. By 1997, his work capturing both portraits and live performances had earned him a sizable reputation. When Bowie visited Mexico for the only show he played there in his life, Aceves rode along with him, capturing the former Ziggy Stardust as he visited iconic locations such as Palacio de Bellas Artes and Teotihuacán.