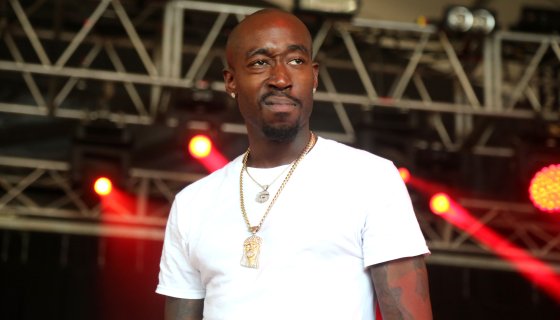 While Black twitter continues to drink the seemingly never ending tea there is a beef between two of Rap’s biggest personalities to also be savored. s has responded to Akademiks in very petty fashion.

As reported on HipHopDX the “Crime Pays” rapper is now selling merchandise with Livington’s likeness superimposed on a Teletubby; yes a Teletubby. He announced the move on his official Instagram. “I ain’t done with U p***. I’mma torture U until U quit your job. And whoever else want smoke holla at Big Rabbit” he wrote.

@akademiks I ain’t done with U pussy. I’mma torture U until U quit your job. And whoever else want smoke holla at Big Rabbit. 🐰💨

Gibbs also went on to post several memes mocking the Youtube personality including one timely shot that shows him with a 69 tatted on his backside.

Unless you have been under a rock the Gary, Indiana MC has been making his rounds in effort to promote his latest offering Alfredo. While conducting an interview with Bootleg Kev he made it clear that he thinks his former record label CEO Jeezy is washed. Naturally the Q&A went viral causing it to be a hot topic on Everyday Struggle. Ak vehemently stood by The Snowman and his stance got Skinny Suge in his feelings. What resulted was a back and forth on social media.

AHAHAHAH ur so funny. I'll let u have that joke.. its a popular one. Just never mention Relevancy again… cuz u not releavant.. u finally did over 10k u talking like u big… boy. u a lil artist. a lil nigga. not top 10. not top 20. u on the outskirts. Should b Happy to be here. https://t.co/xvFBBFEpin