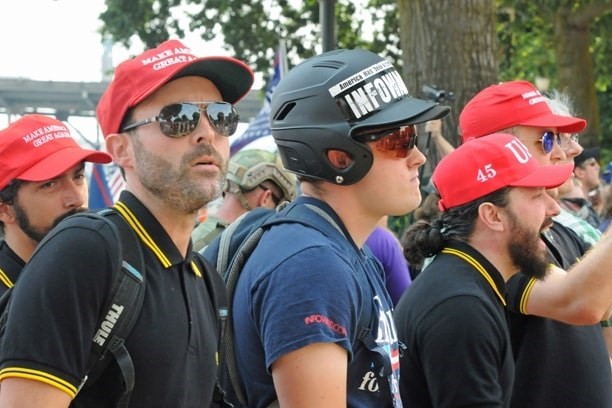 The British label will stop importing its black and yellow polo-shirt to North America and Canada, due to the style’s associations with US extremist group Proud Boys

Earlier this year, Fred Perry shut down a host of racist UK Twitter users who came out of the woodwork to moan about the diverse casting seen across its Instagram account. Now, it’s distancing itself from racist fans in North America and Canada, too. Specifically, the British label has addressed associations with the far-right US extremists the Proud Boys, who have adopted Fred Perry’s iconic black and yellow polo-shirts as their uniform.

After the Proud Boys appropriated its signature Laurel Wreath emblem to advertise an Oregon rally this week, the label released a statement on its website in which it called the group’s subversion of its clothing and logo “incredibly frustrating”. “Fred Perry does not support and is in no way affiliated with the Proud Boys”, it added, as if there were any doubt as to where it stood on the matter.

Taking direct action to sever unwanted ties with the Proud Boys, the label went on to confirm it had made the decision to stop selling the Black/Yellow/Yellow twin tipped shirt in the US and Canada, where it will not be sold again “until we’re satisfied that its association with the Proud Boys has ended”.

Love & unity, the only way, eh!
Fred Perry is dead set against the folks trying to tarnish their image, & so is the ska community. ❤ https://t.co/XAIHhxcPB2

Pointing out the adoption of its shirts by multiple multi-ethnic subcultures throughout British history, including the Mod, Ska, and Northern Soul scenes, the label added: “We are proud of its lineage and what the Laurel Wreath has represented for over 65 years: inclusivity, diversity, and independence.”

Fred Perry’s signature polos are also associated with the Skinhead movement, which originally stood against fascism. By the time the 1970s rolled around, however, the group divided – as some members veered towards the far-right politics of the British National Front. In the time since, the shirt has been adopted by various right-wing movements around the world, many of which are dismally still going strong.

Throughout the years, the brand has consistently denounced the ideologies of the far-right groups it has unwillingly become linked to, closing this week’s statement by confirming it is working with its lawyers to “pursue any unlawful use of our brand”. “To be absolutely clear, if you see any Proud Boys materials or products featuring our Laurel Wreath or any Black/Yellow/Yellow related items, they have absolutely nothing to do with us,” it concluded.

Read the statement in full below.

Fred Perry does not support and is in no way affiliated with the Proud Boys. Read our statement here.