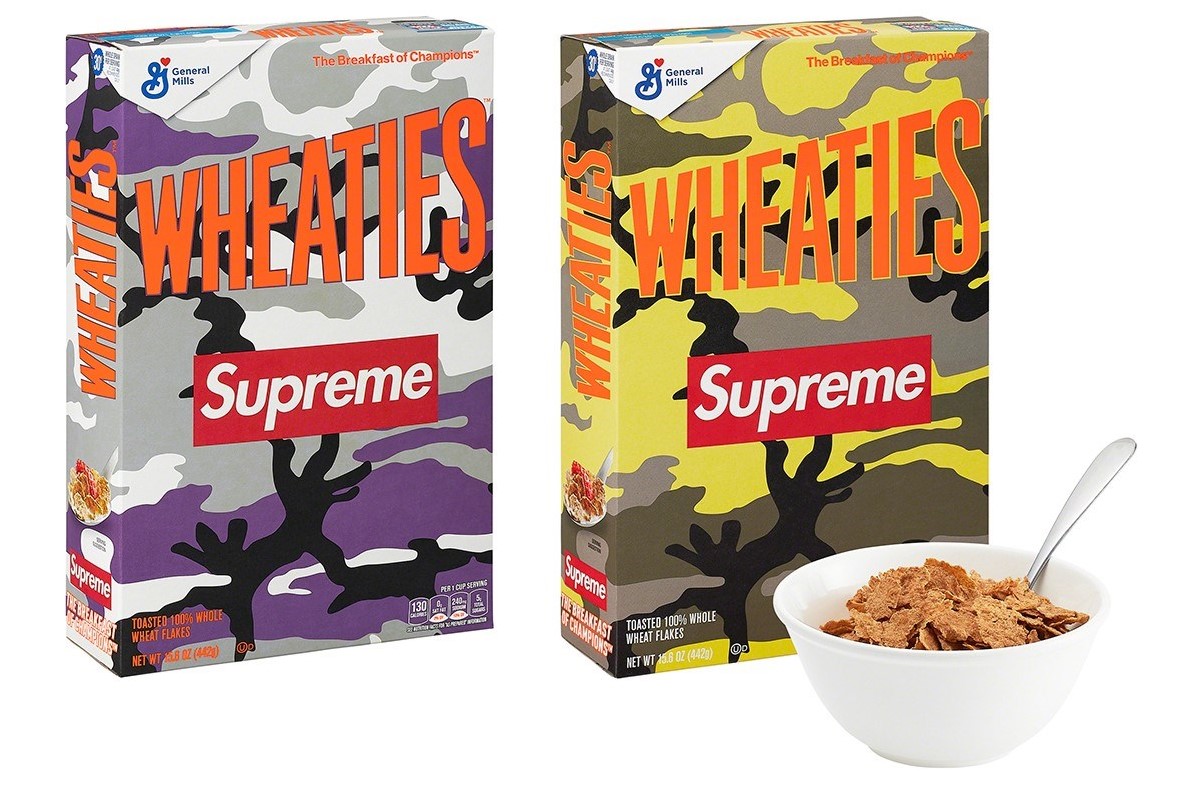 The gentrification of cereal continues

A highlight of every fashion season is discovering what random-ass selection of items Supreme has chosen to stick its logo on this time around. In the past we’ve seen an eclectic range of Supreme Chucky Dolls, Supreme fish bowls, and Supreme portable jump starters. And who can forget the Supreme brick?

Among the most popular merch were the Supreme Oreos the brand dropped as part of its SS20 collection. The Oreos caused a huge stir among hungry hypebeasts, who scrambled to get their hands on the biscuits which were reselling on eBay for up to $17,000. In good news for anyone that missed out on the red and white cookies (and didn’t have a casual 17k to drop on them) Supreme is back with another logoed food item. This time? Cereal.

For SS21, Supreme has teamed up with Wheaties for a logoed version of the whole wheat flakes. The cereal comes in two shades of packaging, purple camouflage and yellow camouflage, complete with the famous Wheaties slogan “Breakfast of Champions.” While Wheaties might at first appear a random choice for Supreme, the cereal brand has a long history of featuring athletes on its boxes, including LeBron James, Michael Jordan and Muhammad Ali, which may well have contributed to the streetwear brand’s decision.

Considering the popularity of the Supreme Oreos, we have little doubt this latest foray into food from the brand will become an equally coveted item. Although, given the outrage and cries of gentrification that the Shoreditch Cereal Cafe faced a few years ago, maybe not. Whether it will hit the dizzy resale heights of the cookies remains to be seen.

Alongside the cereal, this season’s accessories collection includes a Sea-Doo jet ski, hand-painted plates and mugs, disposable cameras, water pistols, a frisbee, a pretty ugly beach towel, kitsch keychains, a Smeg mini-fridge, and much, much more.

The SS20 collection will be available online at Supreme from February 18 – good luck to those hoping to get their hands on it.