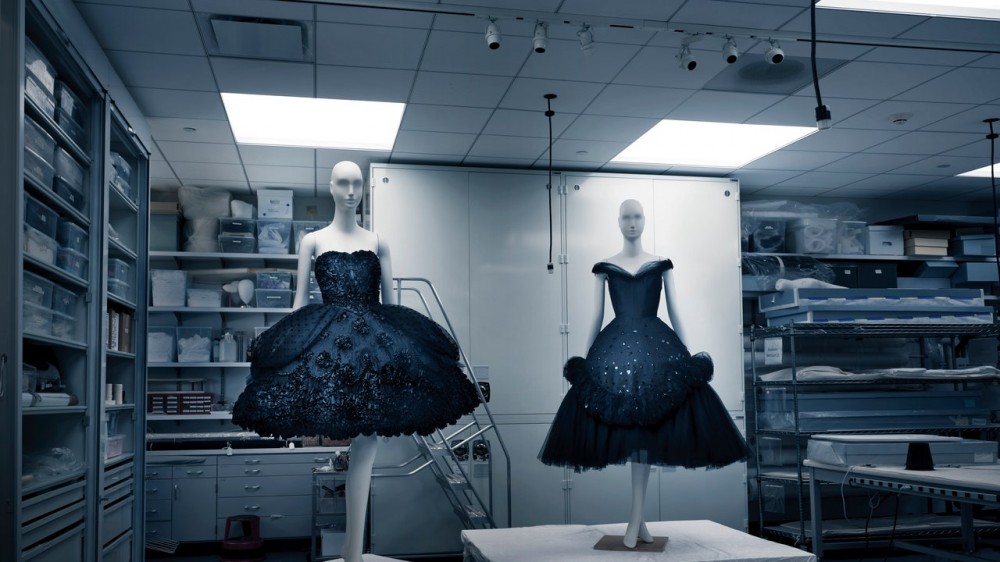 The British stage designer Es Devlin has crafted monumental concert scenes for the likes of Beyoncé and Lorde as well as genius theater sets for Othello at the Met Opera and Hamlet at the Barbican, among others. Devlin’s newest work doesn’t star musicians or actors. After months of COVID-related delays, the exhibition she designed for “About Time: Fashion and Duration” opens October 29 at the Metropolitan Museum of Art’s Costume Institute. The show promises to be a sensory overload, with Meryl Streep, Julianne Moore, and Nicole Kidman reading Virginia Woolf’s Orlando and Devlin’s dramatic set design creating a clock-like pathway via which visitors can explore fashion’s shifting relationship to time. An animated preview of Devlin’s work—two interlocked clock-shaped galleries—makes its exclusive debut here.

The decision to work with Devlin came naturally; she had designed several sets for Louis Vuitton’s womenswear collections in Paris, and with the brand as the exhibition’s sponsor, bringing on Devlin collaborator felt right. “My favorite part of the job is collaborating with other creators outside of the curatorial field,” says Andrew Bolton, the Wendy Yu Curator in Charge of the Costume Institute. “I’ve been so lucky to work with these incredible creative people, and it really advances the narrative of the exhibition.”

He continues: “It’s always important to me that an audience enjoys the exhibition, and it’s an experience for them, so we do try to offer these multisensory immersive experiences, where the installation in a way reinforces the narratives of the exhibition that we’re trying to convey. In this particular case we arrived at Es—I’d been a huge fan of hers and I thought I might work with her last year on ‘Camp: Notes on Fashion,’ but we went in a different direction.”

That change of step for “Camp” proved serendipitous for “About Time.” Bolton has long had a fondness for the scene in the 1994 film version of Orlando, where Tilda Swinton, in the titular role, dashes through a hedge maze and emerges transformed through time and fashion. “I thought the idea of using a maze would be a good vehicle to convey this idea of time travel, and Es has done many mirror mazes, so she’s very familiar with the idea,” he explains. They spent a week working together on a maze concept in London pre-COVID, but then serendipity struck again. “I got a call from the Met saying that the New York Fire Department had shut the idea down because it was a fire hazard, if it was dead ends and people just couldn’t get out,” Bolton remembers. “I said, ‘Es, why don’t we just do a clock?’ Immediately, because Es is so creative, she just switched track; there was no sort of hesitation. She began working on this concept of a clock, and oddly enough I think it’s better than it would have been originally.”

The final exhibit design is of two circular galleries that mimic a clock face, connected by a central darkened pathway. In the first gallery, time is presented linearly through pairings of garments arranged into a chronological timeline. At the gallery’s center is a pendulum, the ultimate reminder of the ticking of the clock, with Bolton’s 1870-to-2020 timeline of style located around the room’s perimeter. The figures seen here in the animation, quite Victorian in silhouette, nod to the pairings Bolton has made with the museum’s archives. Laying out the exhibition this way, he explains, not only emphasizes the importance of the museum’s collection and the strength of a linear view of fashion, but also celebrates a curatorial style the Met championed in the early ’90s. “I wanted to focus on what has been really one of our major contributions to the methodology of fashion curation over the years by focusing on this idea of juxtaposition. The first time we did it actually was in a show called ‘Infra-Apparel’ in 1993; that’s the first time we employed that methodology,” he explains.

Enter the second gallery, and one will be presented with a more topsy-turvy look at fashion’s shifting relationship to time, with looks grouped in duos and trios that cut against timeliness. Here you might find, say, a Victoriana top from Louis Vuitton circa the 2010s paired with one from the 1880s and another from the 1980s. Nonlinear time is illustrated through the gallery’s entirely mirrored walls, refracting each garment, each style, and each idea back onto the others. “The second clock is more like Es’s works with mirrors; it’s more of a contemporary version of a clock,” says Bolton. Quite contemporary in fact, considering that the lockdowns and slowdowns of the pandemic have made us all question our own relationships to time and timeliness.

“Working from home, you are primarily in subjective time,” he says, referencing Henri Bergson’s theory of “pure duration,” moments melting into others in a messy, lasting way. “You’re accountable for your own time as opposed to clock time for once…I’ve always loved the idea of subjective time, but I’ve never been aware of living it more than now.”

Even with months of subjective time to himself at home, Bolton has not changed “About Time: Fashion and Duration” too much—though he did make new acquisitions during the pandemic of underrepresented designers who have shaped the history of fashion. “With the social justice movements of this spring and summer, I looked at the curation and knew I wanted to include more Black, indigenous, people-of-color designers,” he said in Vogue’s November issue. “BLM has made me reflect on fashion curation more generally and the need to create new, more inclusive definitions. I think that we need to readdress the misperception that fashion is exclusively Western, and we need to construct more diverse fashion histories and narratives.”

In the future, he continues, “every decision that I make has to be informed by race and ethnicity and gender and sexuality. The awareness can’t go away; this is a lifelong commitment.” He shared another exciting idea for future Met exhibits. “I’ve also been thinking about a new paradigm for fashion, and I’m not quite sure what that is or what it looks like,” he started off, careful not to reveal too much about 2021’s exhibits, but alluding to a dramatically new “model for fashion exhibitions.” Digital? Phygital? Experiential? We might have to wait until 2021 to see exactly how Bolton will rethink fashion history, but his quest for newness only proves the exhibition’s central conceit: Time waits for no one.