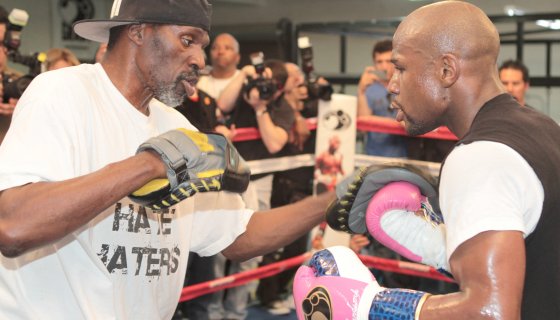 , who is still mourning the loss of his ex-girlfriend and mother of three of his children , now has to process another loss. Mayweather’s uncle and trainer, Roger Mayweather, has died at the age of 58.

Before becoming an integral part of his nephew’s training team and helping craft one of boxing’s most revered fighters, Mayweather himself captured world titles winning top belts in the light welterweight and welterweight class. Across 72 fights, Mayweather, nicknamed the “Black Mamba,” amassed a record of 59-13 and ended his career as the IBA welterweight champ in 1999.

While Mayweather Jr.’s Instagram page is flooded with images of him and Harris is better times, he hasn’t shared any words or images of his uncle. It was reported that Mayweather had been in poor health for some time due to damage suffered over the years from his time in the ring.

On Twitter, the boxing world remembered Roger Mayweather and gave a strong salute for his contributions to the sport. We’ve got those reactions listed below.

Floyd Mayweather's uncle, legendary boxer and trainer Roger Mayweather, has passed away at the age of 58.
❤🙏❤ pic.twitter.com/yE0YSuwhtT

Roger Mayweather is responsible for one of the greatest lines I've ever heard from a boxing cornerman.

In the middle of the Floyd-Gatti beatdown, he turned to the camera and went "I told y'all he's gonna get his ass whooped."

A two weight world champion, and an extraordinary trainer.

The original Black Mamba. Roger Mayweather won belts in two weight divisions. He was no joke at 130, 135, and 140lbs. https://t.co/IHE4JUfepJ

Two things you should know about Roger Mayweather.

1- he was the original “Black Mamba”

2- he has one of the greatest quote in boxing history “you don’t know sh*t about boxing”#RIP pic.twitter.com/FEAxtgmR3V

Despite his achievements as a trainer, don’t forget Roger Mayweather was also a savage in the ring. For me this is one of his most iconic wins with a 1st round KO over Villablanca to retain the Ring, Lineal and WBA super featherweight titles. RIP to a true legend of the sport. pic.twitter.com/qVPEcVIkoY

When Roger Mayweather said “Most people don’t know shit about boxing” that was one of the most profoundest things I ever heard in life. RIP.